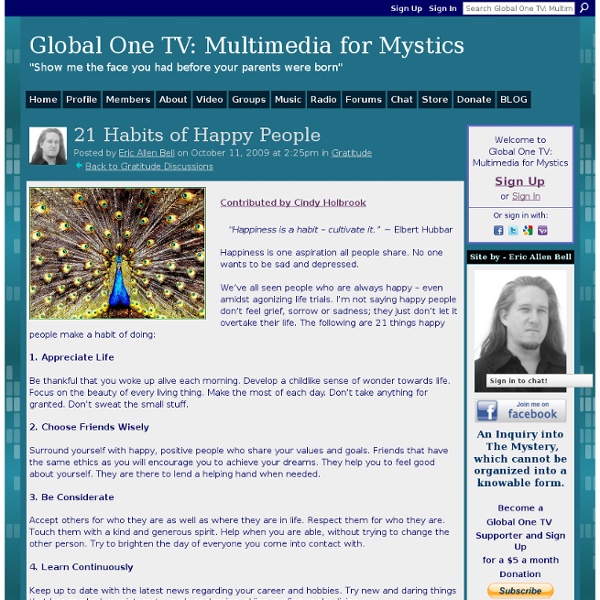 Contributed by Cindy Holbrook “Happiness is a habit – cultivate it.” ~ Elbert Hubbar Happiness is one aspiration all people share. No one wants to be sad and depressed. We’ve all seen people who are always happy – even amidst agonizing life trials. 1. Be thankful that you woke up alive each morning. 2. Surround yourself with happy, positive people who share your values and goals. 3. Accept others for who they are as well as where they are in life. 4. Keep up to date with the latest news regarding your career and hobbies. 5. Don’t wallow in self-pity. 6. Some statistics show that 80% of people dislike their jobs! 7. Take the time to see the beauty around you. 8. Don’t take yourself – or life to seriously. 9. Holding a grudge will hurt no one but you. 10. Develop an attitude of gratitude. 11. Always make sure your loved ones know you love them even in times of conflict. 12. Honesty is the best policy. 13. Meditation gives your very active brain a rest. 14. 15. See the glass as half full.

Meditation Found To Increase Brain Size « Great Human Capital People who meditate grow bigger brains than those who don’t. Researchers at Harvard, Yale, and the Massachusetts Institute of Technology have found the first evidence that meditation can alter the physical structure of our brains. Brain scans they conducted reveal that experienced meditators boasted increased thickness in parts of the brain that deal with attention and processing sensory input. In one area of gray matter, the thickening turns out to be more pronounced in older than in younger people. Our data suggest that meditation practice can promote cortical plasticity in adults in areas important for cognitive and emotional processing and well-being,” says Sara Lazar, leader of the study and a psychologist at Harvard Medical School. The researchers compared brain scans of 20 experienced meditators with those of 15 nonmeditators. Meditators did Buddhist “insight meditation,” which focuses on whatever is there, like noise or body sensations. Controlling random thoughts Slowing aging?

UFO & Paranormal News Massive UFO event in Russia: Crashed flying saucer? Michael Cohen m.cohen@allnewsweb.com A UFO event of Roswell proportions has taken place in Russia and is being ignored by Western media. In Russia itself, the incident has been reported by Interfax, the official Russian government news outlet (see article here). On March 1 in the Irkutsk region of Siberia, a huge object, glowing pink and blue according to some accounts, was seen by thousands of locals as it hurtled towards Earth. An enormous explosion was then heard over a wide area. Curious and frightened residents inundated various police and rescue departments with phone calls. Meanwhile a sizable number of journalists arrived in the region and fanned out to the area's various settlements in search of witnesses: And they found them in the hundreds. Only hours prior to this event, air-traffic controllers in Yakutks, Siberia claim to have picked up a UFO on radar travelling at 6000 mph at a height of 65000.

Free Meditation Music to Download Normally finding genuine, totally free meditation music has some sort of catch. Either you have to join a mailing list, read a lot information or buy something else first; well not today. The first free track was composed by myself. It is exactly 3 minutes in length as are all the other tracks on this Album designed for Reiki. The album is entitled Reiki Ongaku and the reduced size version of the first track of the album can be listened to and downloaded through the link The second track is for a totally different type of meditation experience using experimental music. The Album "Storms of a Kind" uses the sounds of nature with classical instruments, to create a fasciating landscape of sound to help in focus for meditation. Here is the link to download the free 3 minute version on it Storms of a Kind - Experimental Music If you are after free geometric pictures to download please click Sacred Geometry If you want to find out more about myself please click here About Charles Vald

:: JazzFusion.TV - official website :: Bootleg Audio This is the page that has the rare stuff. These vintage recordings feature live performances from some of the most influential artists of the day, whose work defined the Jazz Fusion genre in its formative stages. When Jazzfusion.tv launched in 2006, this page featured recordings that were captured mostly from FM radio broadcasts in Europe and Japan. I'd acquired copies of these and other shows on analog cassette tape in 1996-1997 when I was active in the tape trading world. Since then I've posted an additional 1700+ hours of audio, acquired from a number of trades, and from the Sugarmegs archive. The fidelity of the sound is generally imperfect, but the importance of this music can clearly be heard. Please note that these recordings have never been intended for commercial release. This collection is presented here in that same spirit of sharing, and may not be used for any commercial purpose. If you have some similar vintage Jazz Fusion audio that you'd like to share, please let me know .

Samsung HMX-H300 series - Outdoor Photographer Thursday, January 6, 2011 CES, Las Vegas – January 5, 2011 - Samsung Electronics Co., Ltd, a global leader in digital media and digital convergence technologies, today announced the launch of the new HMX-H300 series, the camcorder designed to give families the very best in Samsung technology within an easy-to-use, durable product. Featuring long battery life, a 3” touch screen LCD, and 30x optical zoom, the HMX-H300 series combines high quality core technologies with easy-to-use features that make the HMX-H300 series fun to use, as well as the ideal camera to have on hand when capturing special family events. The HMX-H300 series offers premium camcorder technology for any situation where there are memories to be captured. “We understand that for a family, buying a camcorder to capture family moments, like a first birthday or a graduation, is an important purchase that is carefully thought out,” said Mr. Smart Video Functions

Samsung Presents the HMX-H300, the Ultimate HD Family Camcorder « Digital Photography It is with great pleasure that I announce the joining of forces of MacCreate, one of the largest and most popular resources for Aperture users on the web, with ApertureExpert. The growth of ApertureExpert has been deliberately slow and steady, as I have always felt that the quality of training and support is of paramount priority. I’ve experimented along the way, one step at a time, allowing the growth the be organic and metered, and unbiased. For example, you’ll notice there’s no advertising on this site — all revenue is derived from sales of ebooks, video training, presets, AppleScripts and more — and all Aperture and photography related. However today we welcome the biggest single change we’ve ever faced. Meet David Schloss David Schloss, the founder of MacCreate, will continue to contribute to the Aperture community here on ApertureExpert. Meet Thomas Boyd Thomas Boyd is another familiar face to MacCreate readers. What’s Next So again, we welcome you to the site. Welcome our new friends