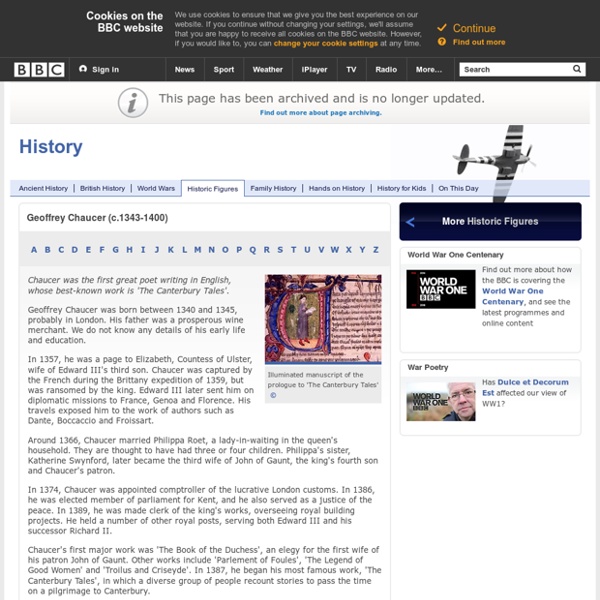 Geoffrey Chaucer Geoffrey Chaucer (born 1340/44, died 1400) is remembered as the author of The Canterbury Tales, which ranks as one of the greatest epic works of world literature. Chaucer made a crucial contribution to English literature in using English at a time when much court poetry was still written in Anglo-Norman or Latin. Geoffrey Chaucer was born in London. He was the son of a prosperous wine merchant and deputy to the king's butler, and his wife Agnes. In 1359-1360 Chaucer went to France with Edward III's army during the Hundred Years' War. Between 1367 and 1378 Chaucer made several journeys abroad on diplomatic and commercial missions. Chaucer took his narrative inspiration for his works from several sources but still remained an entirely individual poet, gradually developing his personal style and techniques. Chaucer did not begin working on The Canterbury Tales until he was in his early 40s. According to tradition, Chaucer died in London on October 25, 1400.

Geoffrey Chaucer - Author, Poet English poet Geoffrey Chaucer wrote the unfinished work, The Canterbury Tales. It is considered one of the greatest poetic works in English. Synopsis Poet Geoffrey Chaucer was born circa 1340 in London, England. In 1357 he became a public servant to Countess Elizabeth of Ulster and continued in that capacity with the British court throughout his lifetime. Early Life Poet Geoffrey Chaucer was born circa 1340, most likely at his parents’ house on Thames Street in London, England. Geoffrey Chaucer is believed to have attended the St. In 1357, Chaucer became a public servant to Countess Elizabeth of Ulster, the Duke of Clarence’s wife, for which he was paid a small stipend—enough to pay for his food and clothing. In 1366, Chaucer married Philippa Roet, the daughter of Sir Payne Roet, and the marriage conveniently helped further Chaucer’s career in the English court. Public Service By 1368, King Edward III had made Chaucer one of his esquires. Major Works Later Life Death

Thomas Becket Thomas Becket, Archbishop of Canterbury, was killed in December 1170. Becket’s death remains one of the most famous stories associated with Medieval England. In Medieval England the Church was all powerful. The fear of going to Hell was very real and people were told that only the Catholic Church could save your soul so that you could go to Heaven. The head of the Catholic Church was the pope based in Rome. The most important position in the church in Medieval England was the Archbishop of Canterbury and both he and the king usually worked together. A king of England could not remove a pope from his position but popes claimed that they could remove a king by excommunicating him – this meant that the king’s soul was condemned to Hell and people then had the right to disobey the king. For people in England , there was always the real problem – do you obey the king or the pope ? In 1162, Henry II, king of England, appointed Thomas Becket, as Archbishop of Canterbury. The burial of Becket

Geoffrey Chaucer (c.1343-1400) Welcome to the Luminarium Chaucer page. Here you will find a Chaucer Biography, Chaucer's Works, Quotes, Essays and Articles, as well as links to study resources and a list of books helpful for further study. All of these can be accessed from the red navigation bar at the top. The sidebar on the right has links to Medieval writers and works, historical persons and events, and concepts relevant to the study of Chaucer. Many of these links lead to the Luminarium Encyclopedia. And don't forget to visit the Chaucer Discussion Board to chat and ask any questions that may crop up. Medieval History Medieval HistoryMedieval Life and Times encompass one of the most exciting and turbulent times in English and European History. The Medieval people of the Middle Ages and Dark Ages were warlike, they sought to conquer new lands and have even been described as barbaric. The Crusades exposed the English and the Europeans to a more refined society and the great Eastern fortresses which influenced Medieval architecture. Medieval History of FeudalismThe Medieval history of feudalism covers the main European countries. Feudalism PyramidFeudal JusticeThe Peasants Revolt Medieval TimelinesA series of comprehensive Medieval Timelines detail the major events significant to the lives and events of famous people and the Kings and Queens of England and Europe. Medieval History TimelineEarly Medieval TimelineLate Medieval Timeline Doomsday Book The Black DeathThe Black Death victims in Medieval Times were terrified of the deadly disease. Black Death The Magna CartaWhat is the Magna Carta? Magna Carta

The Norton Anthology of English Literature: The Middle Ages: Review: Summary The Middle Ages designates the time span from the collapse of the Roman Empire to the Renaissance and Reformation, and the adjective "medieval" refers to whatever was made, written, or thought during the Middle Ages. The Middle Ages was a period of enormous historical, social, and linguistic change, despite the continuity of the Roman Catholic Church. In literary terms, the period can be divided into the Anglo-Saxon period (c. 450-1066), the Anglo-Norman period (1066- c. 1200), and the period of Middle English literature (thirteenth and fourteenth centuries).

Geoffrey Chaucer Geoffrey Chaucer was born in London sometime between 1340 and 1344 to John Chaucer and Agnes Copton. John Chaucer was an affluent wine merchant and deputy to the king’s butler. Through his father’s connections, Geoffrey held several positions early in his life, serving as a noblewoman’s page, a courtier, a diplomat, a civil servant, and a collector of scrap metal. His early life and education were not strictly documented although it can be surmised from his works that he could read French, Latin, and Italian. In 1359, Chaucer joined the English army’s invasion of France during the Hundred Years’ War and was taken prisoner; King Edward III of England paid his ransom in 1360. In 1366, Chaucer married Philipa de Roet, who was a lady-in-waiting to Edward III’s wife. Chaucer’s early work is heavily influenced by love poetry of the French tradition, including the Romaunt of the Rose (c. 1370) and Saint Cecilia (c. 1373), later used as the “Second Nun’s Tale” in the Canterbury Tales.

History - Thomas Becket Middle Ages, Dynamic Culture of the Middle Ages The European High Middle Ages, which lasted from about 1050 to 1300, evoke for many people romantic images of knights in shining armor, magnificent castles, and glorious cathedrals. And to many people, the word medieval (Latin medium aevum; "middle age") wrongly suggests a cultural intermission between the classical period of the Greek and Roman civilizations and the Renaissance. On the contrary, the High Middle Ages was a dynamic period that shaped European identity and development, stimulated in part by Europe’s interactions with other cultures in Eurasia and the Mediterranean. Economic Expansion and the Emergence of Towns Territorial expansion, innovations in agriculture, and the development of cities and trade brought rapid economic change to medieval Europe. Migration and expansion of frontiers stretched the boundaries of European countries in the Mediterranean, eastern Europe, and Iberia. Social Diversity Political Centralization and the Development of Government by Consent