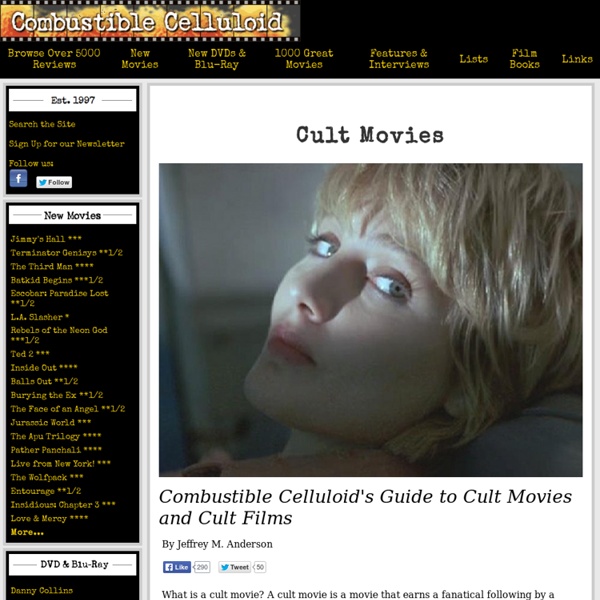 Army of Darkness (1993) The third film in Sam Raimi's Evil Dead trilogy features more zombies, more action, more laughs, and more kisses. With Bruce Campbell. "Gimme some sugar, baby!" Basket Case (1982) Frank Henelotter's amazing low-budget splatter comedy showcases Siamese twin brothers -- one normal, the other a squishy little beast who lives in a basket -- searching for revenge on the New York doctors who separated them. Battle Royale (2000) This mind-blowing Japanese film is endlessly entertaining, by turns gory and hilarious, disturbing and exciting. The great Japanese exploitation filmmaker Kinji Fukasaku (The Green Slime, Yakuza Graveyard) was nearly seventy when he made this masterpiece, and it turned out to be his final completed film. The Big Lebowski (1998) Any of the Coen Brothers' films could qualify as cult classics, but this one is both the most underappreciated and has the most fanatical following. The Black Cat (1934) Edgar G. Black Sunday (1960)Black Sunday (a.k.a.

Best Film Speeches and Monologues Contemptuous talk-show radio host in Dallas Texas, Jewish radio personality Barry Champlain (Eric Bogosian) held all the phone calls, to tell his listening audience what he really felt about them, as the camera circled around him: Believe it or not, you make perfect sense to me. I should hang. I'm a hypocrite. I ask for sincerity and I lie.

Blog & Blog Archive & 23 Surprisingly Effective... For the live-updated, interactive version of this infographic, click here. A year ago, we published one of our most popular findings – 6 surprisingly effective treatments for depression. I went ahead and repeated the analysis today, and now we have 23 treatments in the “surprisingly effective” category for depression. Top 10 underappreciated kids movies from the last 20 years Before we get started, one note: I do appreciate that some films on this list earned a lot of critical acclaim, or pulled in a reasonable amount of cash. The point, though, is that these are the films that have been seemingly forgotten about. And that's a fate they simply don't deserve.

Tasting Wine Tasting Wine All About Wine Tasting There’s more to tasting a glass of wine than throwing it down your gullet. We’ll start slow. The 100 Best Films Of World Cinema From Brazil to Japan to France and Senegal, from Neo-Realism to Dogme to J-horror, we've compiled a list of the very best films not in the English language (note: features, not documentaries). So rustle up some sushi, strike up a gauloise and make sure you've locked your bicycle as we count down the top 100 world cinema movies... 100.

Film & Video The following films are presented for educational and non-commercial use only. All copyrights belong to the artists. About UbuWeb Film & Video UbuWeb is pleased to present thousands of avant-garde films & videos for your viewing pleasure. UCB Parents Jokes &Quotes: Kids talk Science This page is brought to you by UC Berkeley Parents Network Back to the Jokes & Quotes Collection THE FOLLOWING ARE ALL QUOTES FROM 11 YEAR OLDS' SCIENCE EXAMS: * "Water is composed of two gins, Oxygin and Hydrogin. Oxygin is pure gin. Hydrogin is gin and water." * "Artificial insemination is when the farmer does it to the cow instead of the bull." * "When you breathe, you inspire.