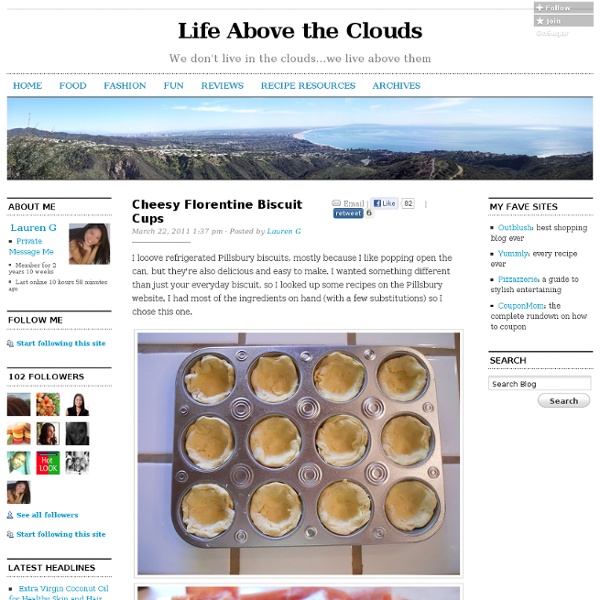 March 22, 2011 1:37 pm · Posted by Lauren G I looove refrigerated Pillsbury biscuits, mostly because I like popping open the can, but they're also delicious and easy to make. I wanted something different than just your everyday biscuit, so I looked up some recipes on the Pillsbury website. I had most of the ingredients on hand (with a few substitutions) so I chose this one. 2 tablespoons unsalted or salted butter 1 box (9 oz) frozen chopped spinach 1/2 teaspoon salt 1/4 teaspoon pepper 1 can (16.3 oz) Pillsbury® Grands! 4 oz thick-cut slices Canadian bacon, cut into 1/4-inch cubes (I used ham lunchmeat) 4 eggs 2 cups shredded mild Cheddar cheese (8 oz) Heat oven to 350°F. In 10-inch skillet, melt butter over medium heat. Separate dough into 12 biscuits by peeling apart the layers. Break eggs into bowl and beat with a fork to mix whites and yolks evenly. Bake 15-20 minutes or centers feel firm when touched and biscuits are golden brown.

Cinnamon and Sugar Muffins On Simple Daily Recipes It really doesn't matter what time it is when you sink your teeth into these moist muffins. I started out making them for breakfast, but the family kept making snacks and dessert out of them. The muffins barely made it to the end of the day. wet ingredients 3/4 cup non-dairy milk (soy, almond, coconut, etc.) 1/2 cup applesauce 1 tablespoon distilled vinegar dry ingredients 2 cups flour 2/3 cups sugar 3 teaspoons baking powder 1 teaspoon salt cinnamon-sugar topping 1/2 cup melted butter in one bowl 1/2 cup sugar with 1 teaspoon cinnamon in another bowl Heat oven to 400ºF. Beat milk, applesauce and vinegar in a medium bowl. Use a large cookie dough scooper to fill muffin cups 2/3 full. Store cooled muffins in a container with a loose fitting lid and enjoy them later on in your day.

Cooking on a Himalayan Salt?Plate How would you like a piece of cookware that is 300 million years old? These Himalayan Salt Plates are cut from ancient salt deposits and are considered the purest form of salt. They are becoming very popular right now to cook on and for good reason - they impart a rich flavor to anything you cook on them and not just a salty flavor. The plates contain mineral deposits that add a richness that you can't get with just salt. There are a few ways you can use your salt plates. You can either cook on them, chill them, or serve foods on them at room temperature. Cooking asparagus, thinly sliced beef and snap peas On a trip to Oregon last year, I stopped by The Meadow and picked up a salt plate from Mark Bitterman. Salt Plates at The Meadow in Portland, Oregon I have cooked several things on my salt plate and the possibilities are endless. Mozarella slices with a little olive oil and basil leaves When preparing food for cooking on the salt plate, don't even season it. Have fun!

Pepperoni Pizza Monkey Bread Recipe Kids can be frustratingly picky eaters. They can also have highly entertaining quirks. My niece used to ask for pepperoni pizza and then proceed to discard all of the pepperoni. But don’t you dare suggest that she order plain cheese pizza! She did not want plain cheese pizza. Un-Pepperoni Pizza. But when you wrap pepperoni pizza into a fun, savory, pull-apart style bread, it’s no longer “icky” pepperoni pizza. I’ve had these Pizza Bites bookmarked for ages, so when I finally found an excuse to make them, I wanted to take it in a slightly different direction: a savory monkey bread. A very light coating of garlicky butter-covered pepperoni pizza bites, piled into a bundt cake pan, makes for a very fun Pepperoni Pizza. Or Pepperoni Un-Pizza. You can take the long route and make your favorite pizza dough and marinara sauce, or the short route and pick up your favorite pizza dough and red sauce from the store. Ingredients Instructions Notes Yields: 48 pieces Adapted from Pizza Bites via Annie's Eats

Cheeky Kitchen » How To Make Butterflake Rolls if You’re Not Martha Stewart Try as I might, I can’t make things perfect. I can make one cupcake in a batch look pretty dang awesome. From time to time my junk drawer has all of the pens in the same slot. I’ve attempted gardening until my dirt is a soft mixture of home-recycled compost, but somewhere between good intentions and real life, I discover that I don’t have enough patience to hand-craft pansies from gumpaste. Nor do I have what it takes to handpaint my own murals on antique dresser handles. Apparently, I don’t have what it takes to make photo-worthy Butterflake Rolls, either. No worries. The floor will get messy. Toss a bit of butter into your muffin tins. Mix together your basic ingredients until a soft, luscious dough forms. The real trick to making Butterflake Rolls is layer after layer after layer of butter kneaded into layer after layer after layer of dough. Bound to get ugly before it gets beautiful. Oh, who am I kidding.

Pop Up Pancakes We love to eat breakfast for dinner, it’s easy and I have all the ingredients. One of our favorites is Pop Up Pancakes, or as my husband’s family calls them, German Pancakes. I like to put a little twist on them by cooking these in muffin tins. They cook up as little puff balls and are easy for the kids to eat. Pop Up Pancake Recipe – makes 24 muffins or fills a 9×13 baking pan 1 cup milk1 cup flour6 eggs1/4 cup melted butterdash saltPreheat oven to 400* and grease your muffin tins 1. 2. 3. Now they are ready for toppings. Tagged as: breakfast Written by Marie LeBaron Marie is founder and managing editor of Make and Takes, and author of the book, Make and Takes for Kids.

How to Make Pizza Without Dough | « LXRCUISINE I was getting kind of sick of ordering delivery pizza (this happens at least 2-3 times a month). It was time to put a spin on gourmet pizza, but I just didn't know what it would be. Without pizza dough or an oven that is capable of creating the perfect pizza crust (I don't have an oven that can go up to a 1000 degrees), I decided I would use potatoes instead. This recipe is elegant enough to serve at a dinner party, but easy enough that you can cook it within 5-15 minutes. For 4 small, personal sized pizzas 4" in diameter, you will need: 2 large potatoes peeled and cleaned4 teaspoons salt (to flavor the potatoes) I'm doing four different flavor combinations here, and the measurements for each combination will top 4 small pizzas or 1 large pizza. Cheese & pepperoni pizza: 3/4 cup mozzarella cheese1/4 cup marinara sauce10 slices of pepperoni (or as much as you like)7-8 leaves of fresh basil Mushroom swiss and ham pizza: Shrimp scampi pizza: Bleu cheese & arugula pizza: Thanks for reading.

Caramel Apple Sticky Buns I’ll just say it: I’m not a big fan of nuts on or in my cinnamon rolls or sticky buns. To me, big chunks of nuts are a distraction. A distraction from the pure, unabashed ridiculousness of the gooey, fattening rolls. You can add nuts to this recipe, of course, but I encourage you to try them without first…just once. I put a caramel apple spin on my impossible-to-mess-up cinnamon roll dough, and I loved the results. This fall and winter, I’m going to be experimenting with different varieties of sweet rolls. It isn’t going to be pretty. I went ahead and made a full batch of my cinnamon roll dough, but for the recipe below I halved it. We’ll start with the caramel topping first: melt 1 stick of butter in a heavy skillet over low heat. Add 1 1/2 cups packed brown sugar. Next, add 1 to 2 tablespoons dark corn syrup… And 2 tablespoons heavy cream. I also added a little Calvados—an apple-flavored brandy—but I didn’t take a photo because I felt naughty. Just roll out the dough pretty thin… The sugar…