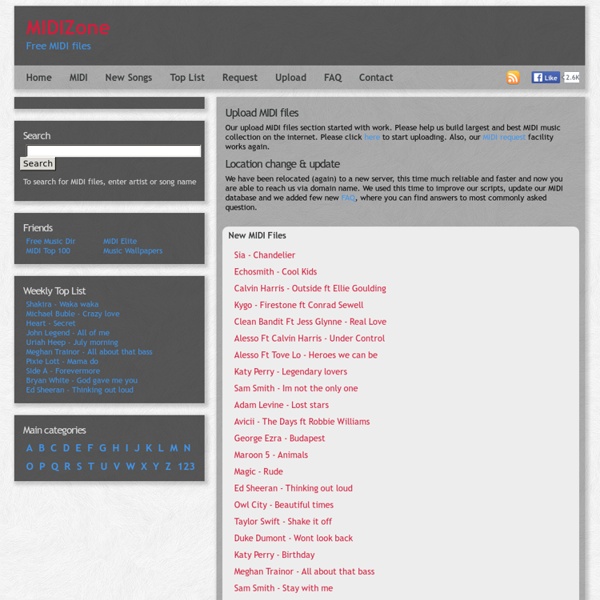 Rock MIDI Files - Download for free :: MIDIWORLD.COM :: 10 Search result: Song Galaxy Midi-Pyrénées Midi-Pyrénées (French: [midi piʁene] ( listen); Occitan: Miègjorn-Pirenèus or Mieidia-Pirenèus; Spanish: Mediodía-Pirineos) is a former administrative region of France. Since 1 January 2016, it is part of the new region Occitanie.[2] It was the largest region of Metropolitan France by area, larger than the Netherlands or Denmark. Midi-Pyrénées has no historical or geographical unity. The name chosen for the new region was decided by the French government without reference to the historical provinces (too many of them inside the region). Geographical composition[edit] Landscape in Gers, Midi-Pyrénées Landscape in Aveyron, Midi-Pyrénées Historically, Midi-Pyrénées is made up of several former French provinces: The Pyrenean provinces of Couserans, Nébouzan, Quatre-Vallées, and Bigorre (but not the County of Foix) are sometimes considered to be part of Gascony. This point is still a matter of debate. Elements of unity[edit] Demographics[edit] Identity[edit] Economy of Midi-Pyrénées[edit] Notes[edit]

Doepfer LMK4+ | Ananlogue Haven the lmk4+ is our most powerful midi master keyboard with 8 split zones, 128 memories and a lot of free programmable controllers ( 2 wheels, 2 sliders, one rotary potentiometer, 2 footcontrol connectors, 2 footswitch connectors, after touch). lmk4+ meets all conditions one would expect from a high-end master keyboard. the lmk plus series of midi masterkeyboards established in the musician scene during the last few years. all keyboards of the lmk-plus series are equipped with the same high quality 88 keys piano-type keyboard with patented real hammer mechanics (see picture below). this type of hammer mechanics does not compare to low cost hammer mechanics offered by some competitors (not only a simple metal lever beyond each key).

MIDI Example of music created in MIDI format MIDI allows multiple instruments to be played from a single controller (often a keyboard, as pictured here), which makes stage setups much more portable. This system fits into a single rack case, but prior to the advent of MIDI, it would have required four separate full-size keyboard instruments, plus outboard mixing and effects units. MIDI (/ˈmɪdi/; short for Musical Instrument Digital Interface) is a technical standard that describes a communications protocol, digital interface, and electrical connectors and allows a wide variety of electronic musical instruments, computers and other related music and audio devices to connect and communicate with one another.[1] A single MIDI link can carry up to sixteen channels of information, each of which can be routed to a separate device. MIDI technology was standardized in 1983 by a panel of music industry representatives, and is maintained by the MIDI Manufacturers Association (MMA). History[edit]