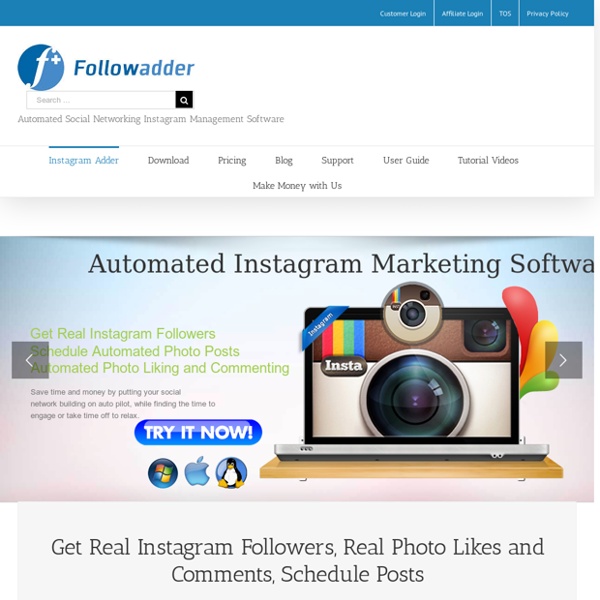 19 Twitter Desktop Apps Compared Twitter has become an integral part of our social media lives, marketing strategies, and business objectives. We have multiple accounts, hundreds of followers to watch, Twitter trends to track, hashtags to follow, and a frequent need for continuously updating search results. As such, getting by on the limited feature set available via Twitter.com is difficult at best. Enter the desktop application, a third-party piece of software that you can install on your computer to interface with Twitter and get more out of your microblogging activities. Now that Twitter is older than a toddler, you have a variety to choose from. Search Twitter users by Location and Bio and Create Twitter Lists: LocaFollow Search and filter options allowing you to find people to follow depending on location, influence, number of followers, how active users are on Twitter and many more! Find the most beneficial people to target so that you can grow and increase the quality of your Twitter community. Find out your best time to tweet, discover the interests of a custom sample of users and endless extra features!

Home - YoruFukurou YoruFukurou (NightOwl) YoruFukurou (NightOwl) is a native Twitter client for Mac OS X. Features of YoruFukurou Create Tabs from Rules and Lists You can filter tweets by defining rules with user IDs, keywords, and regular expression. 8 Free Tools to Visualize Information on Twitter There’s a lot of noise on Twitter. People use a variety of ways to filter through that noise, from following specific lists, finding like-minded people through third party sites, or using a variety of services and websites to find the information that matters to them on Twitter. Another interesting way to filter through what is being said on Twitter, and better yet, analyse it, is to visualize it. This is certainly not a new idea, and we’ve written about some services in the past that will allow you to do just that. With the world around Twitter constantly growing and developing, it’s no surprise that since then there are a ton more services allowing you to visualize your followers, Twitter stream and your own personal Twitter stats. Portwiture

Account Management ManageFlitter is pleased to be bringing you a whole new way to grow, clean-up, and manage your Twitter account. Our new Remote Account Management service allows you to utilise our team of Account Managers (with many years of clicking experience on many different brands of mice) to keep your account clean and your processing queue clear. Our Account Management is performed by people (not computers) and is compliant with Twitter's requirements. All remote actions are video recorded to ensure 100% compliance. Sign Up Twitter spam is a drag. What if you could know for sure that your followers are truly human, and not some bot? TrueTwit is designed to help you: Verify people from robots Avoid Twitter spam Save time managing your followers There are two versions: TrueTwit Premium TrueTwit Premium builds on the follower management in TrueTwit Basic by doing an in-depth, automated analysis of your followers and their tweets, and has the following features: No direct messaging of new followers. Access to our Follower Analysis page which summarizes the status of your followers.

Socialomate 6 ressources pour envoyer plus de 140 caractères avec Twitter La fameuse limite des 140 caractères avec Twitter est quelquefois un peu gênante. Mais il faut savoir que plusieurs services permettent d’outrepasser cette limite. Différentes méthodes sont utilisées à cette fin. Je vous présente aujourd’hui six de ces services qui peuvent vous être bien utiles. Who Unfollowed Me on Twitter How To Backup Your Twitter Archive With the Twitter fail whale popping up all the time, you never know when something tragic might happen. No one want to lose all of their Twitter tweets, followers, or anything else for that matter. That’s why it’s a good idea to backup your Twitter archive on a regular basis in case of a Twitter mishap. As we all know, there has been numerous times in the past where users have lost followers, tweets, and DMs. Fortunately, you can make sure this doesn’t happen to you by using one of the following methods to backup your Twitter archive. Tweetake

10 Powerful Tools To Make Tweeting More Efficient It is fantastic to see Twitter moving faster than ever with its developments. The company received $800m in investment, acquired several Apps recently and put out plenty of new features. On top of all this, the company just announced that there are now over 1 million Apps that are part of the Twitter eco-system. Every 1,5 seconds another one registered. Recently, Twitter’s own Jack Dorsey approached App developers and encouraged them to keep building their businesses in and around the Twitter eco-system. This is particularly interesting as Twitter’s relationship hasn’t always been a friendly one.

Is there a free mass-unfollow service for Twitter? 10 Top Twitter Tools Suggested By the Pros Yes, there are a ton of great Twitter Tools out there for you, but which ones should you pick? I thought one of the best ways to narrow your choice down is to get in touch with the real Social Media experts. I sent them an email and asked them about their recommended Tools for you. So here are the top 10 responses from the Twitter Pros out there.

Twitter = Instant Memories Now you can send your tweets directly into Evernote. Why is this cool? Because Twitter is chock-full of great stuff. Your ideas, thoughts, and experiences mixed together with all of the content from the people you follow: journalism, storytelling, commentary, activism, even comedy –to quote Rob Corddry, “It’s the perfect joke-writing medium. If you need more than 140 characters then it’s not worth it.” Thanks to the Evernote-Twitter integration, you can easily capture the tweets you like: your own or those showing up in your stream.