Exploring the Depth and Beauty of Anglo-Saxon Literature 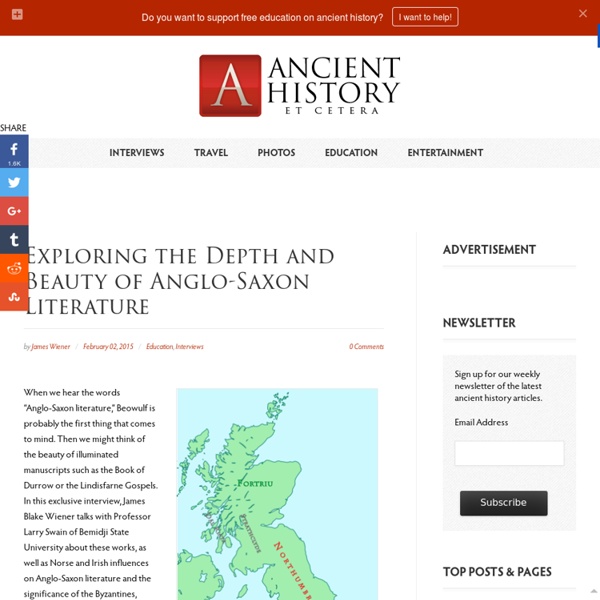 This map shows kingdoms in the island of Great Britain at about the year 800 CE. When we hear the words “Anglo-Saxon literature,” Beowulf is probably the first thing that comes to mind. Then we might think of the beauty of illuminated manuscripts such as the Book of Durrow or the Lindisfarne Gospels. In this exclusive interview, James Blake Wiener talks with Professor Larry Swain of Bemidji State University about these works, as well as Norse and Irish influences on Anglo-Saxon literature and the significance of the Byzantines, Theodore and Hadrian, who came to Northumbria in the seventh century CE. Professor Swain recommends learning Old English in order to be able to read works in Old English, of course, but equally intriguing, to allow us to better express ourselves in modern English. JW: Professor Swain, what do you find so compelling about the Anglo-Saxons and their literature? LS: That is a difficult question to answer. At roughly the same time, I discovered J. Image Key: Dr.

Anglo-Saxon literature - English and Related Literature, The University of York Overview The poetry and prose of the Anglo-Saxons stands at the beginnings of English literature. Between the arrival of the Anglo-Saxons in Britain and the Norman Conquest, Anglo-Saxon literature played a key role in the emergence of an English nation and identity and in transforming the world of writing from a Latin one to a vernacular one. Texts to be studied may include Beowulf and other heroic poetry, The Dream of the Rood and other religious writing, historical writing and The Wanderer and other lyric verse. Students will be required to purchase Peter Baker, An Introduction to Old English, 2nd edn, 2007. Aims and Objectives

anglo-saxon Early History of England The island was originally inhabited by Celtic tribes from Central Asia prior to the invasion by the Romans c. 50-100CE. Some of the Celts, a brave, fierce, and what we would call barbaric people, fled west over the mountains to what is now Wales and further over to Ireland. The rest stayed and intermarried with the invading Romans. The Romans brought architecture, art, "civilization," Christianity and most important, literacy. This left the natives open to attacks from the neighboring Picts (from what is today Scotland) and Jutes (a Germanic tribe). These Anglo-Saxons were brave, rude, reckless, adventurous and barbaric. Religion: Anglo-Saxon Poetry There were a number of qualities found in Anglo-Saxon poetry: Heroic behavior is praised Almost no romantic love An overall effect to formalize and elevate language, often through the use of literary devices. back

History - Ancient History in depth: The Anglo-Saxons Anglo-Saxon | people Anglo-Saxon, term used historically to describe any member of the Germanic peoples who, from the 5th century ce to the time of the Norman Conquest (1066), inhabited and ruled territories that are today part of England and Wales. According to St. Bede the Venerable, the Anglo-Saxons were the descendants of three different Germanic peoples—the Angles, Saxons, and Jutes. By Bede’s account, those peoples originally migrated from northern Germany to the island of Britain in the 5th century at the invitation of Vortigern, a ruler of Britons, to help defend his kingdom against marauding invasions by the Picts and Scotti, who occupied what is now Scotland. The peoples of each of the various Anglo-Saxon kingdoms spoke distinctive dialects, which evolved over time and together became known as Old English. The term Anglo-Saxon seems to have been first used by Continental writers in the late 8th century to distinguish the Saxons of Britain from those of the European continent, whom St.

Epic World History: Anglo-Saxon Culture The Anglo-Saxons were Germanic barbarians who invaded Britain and took over large parts of the island in the centuries following the withdrawal of the Roman Empire. They were initially less gentrified than other post-Roman barbarian groups such as the Franks or Ostrogoths because they had less contact with Mediterranean civilization. The Anglo-Saxons were originally pagan in religion. The main group, from northwestern Germany and Denmark, was divided into Angles, Saxons, and Jutes. German tribal affiliations were loose and the original invaders included people from other Germanic groups as well. Although some of the early Anglo-Saxon invaders had Celtic-influenced names, such as Cedric, the founder of the house of Wessex, the Anglo-Saxons had a pronounced awareness of them-selves as different from the peoples already inhabiting Britain. The early Anglo-Saxons highly valued courage and skill in battle, as reflected in the most significant surviving Anglo-Saxon poem, Beowulf.

Middle Ages for Kids: Anglo-Saxons of England History >> Middle Ages for Kids Who were the Saxons? The Saxons were a people from north Germany who migrated to the island of Britain around the 5th century. There were actually three main peoples: the Saxons, the Angles, and the Jutes. After these people moved to Britain they became known as the Anglo-Saxons. Eventually the name "Angles" became the "English" and their land became known as England. Anglo-Saxon Kingdoms The Anglo-Saxons were the dominant peoples on the island of Britain from 550 to 1066. The first kingdom to dominate was Northumbria in the early 600s, a kingdom to the north that was settled by the Angles. Dane Invasion In the mid-800s the Danes (people from Denmark) began to invade England. Alfred the Great Prince Alfred became king in 871. King Alfred became known as Alfred the Great. Social Order At the top of the Anglo-Saxon social order were the kings. Laws and Government The Saxon king did not rule alone. The laws of the Saxons were very primitive. Legacy