How to Clear a Blocked Nose 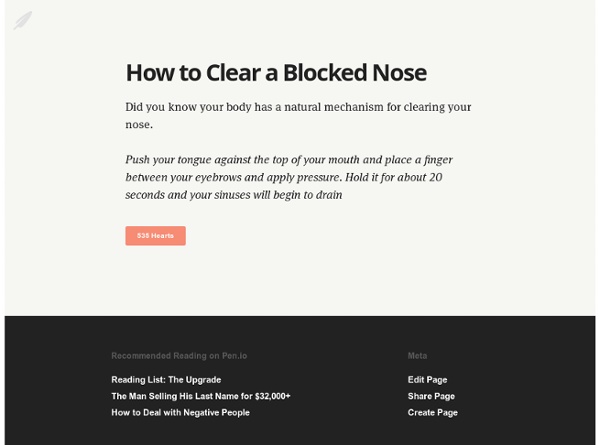 50 Lessons I wish I had learned earlier Welcome to our blog! Here you'll find bits and pieces of wisdom learned from cycling 17,000 miles from Alaska to Argentina together as a family. Hope it inspires you to live your dream! printer Eating 10 hot dogs in 6 minutes and belching the national anthem may impress your friends, but neither of those feats will do much for your body—at least not much good. Instead, why not train yourself to do something that may actually pay off? We're not talking bench presses and interval training (though those do help).

A nursing student who beat the odds “It’s not more than I could do, it’s just more than I ever thought I could.” Although I do not know the origins of this quote, these encouraging words are what got me through four years of nursing school with osteogenesis imperfecta. This is me, Kristal Nemeroff. I started nursing school in 2007, and to be honest, with all the discouragement I received from nurses, I never thought I would graduate. I will never forget during one of my clinical rotations when a nurse looked at me and asked, “How are they letting YOU be a nurse?” er 11: Combustion (Updated 5/31/10) Chapter 11: Combustion(Thanks to David Bayless for his assistance in writing this section) Introduction - Up to this point the heat Q in all problems and examples was either a given value or was obtained from the First Law relation. However in various heat engines, gas turbines, and steam power plants the heat is obtained from combustion processes, using either solid fuel (e.g. coal or wood). liquid fuel (e.g. gasolene, kerosine, or diesel fuel), or gaseous fuel (e.g. natural gas or propane). In this chapter we introduce the chemistry and thermodynamics of combustion of generic hydrocarbon fuels - (CxHy), in which the oxydizer is the oxygen contained in atmospheric air.

Giant Paper Rose Flower If you loved the beautiful DIY wedding this morning and Nata’s gorgeous paper flower bouquets, you are in luck as Nata is sharing how she crafted them with us! She was inspired by a template created by Morgan Levine on Martha Stewart (as was I in the flowers I created for this styled shoot). I just love that this basic idea has inspired different brides to create their own version of giant paper flowers – you might remember these equally awesome giant paper flowers from this wedding I shared last year. :) Thanks so much Nata for sharing how you created your giant pink paper rose + special thanks to Studio Castillero for the photos of the DIY + her wedding! 6 Cool Kinetic Technologies - Room with a Veu Forget the cloud, these devices work on air. To many, the way some technologies work might seem like magic. But there are shades of enchantment, from the Bluetooth earpiece that seems no more amazing than a hackneyed magician at a kids' party to the technology that's more in the league of David Blaine. Even before the Lumière brothers scared Parisian audiences out of their wits and their seats by making them think that they'd be flattened by a motion-picture train, part of technology's charm has lied in illusion.

Nature: New set of cute animals Another amazing set of cute animals the nature has to offer. 1. Baby hedgehogs 2. Baby pig 3. From Wrestling Legend to Double Amputee, Kamala Keeps Fighting SENATOBIA, Miss. — The day after they cut off his leg, James Harris' screams echoed through the halls of Baptist Memorial Hospital. Doctors upped the dosage on his anesthetics, and Harris' wife, Emmer, tried to calm him by clutching his hand. Nothing worked. Throughout the day and into the night, Harris wailed in agony as nurses stood at his bedside, pleading with him to stop. "You can't keep yelling like that," one of them said. "There are other people in this hospital, too."

Shroomery - Magic Mushrooms: Which mushrooms grow wild in my area? Panaeolus subbalteatus (know as subbs by some people) is by far the most widely distributed psychoactive mushroom in the United States (if not the world). Although this mushroom is typically ranked as "weakly potent" to "moderately potent," it's all that some people will be able to find. This guide contains a very large amount of pictures of Panaeolus subbalteatus and it's most common, inactive, look-a-like Panaeolina foenisecii. First I will start off by explaining the best places and times of year to find these mushrooms.

DIY storybook paper roses DIY storybook paper roses You’re going to love today’s DIY project so much that you’re going to want to start tearing pages out from old books tonight! Remember the storybook roses in Shanna + Richard’s wedding? 30 Most Ridiculous Doodles on Drawing Something Draw Something is a mobile app developed by Omgpop. It was one of the Mobile apps which won the Flurry App Spotlight Awards in 2012. In the first five weeks after its launching, the game was downloaded 20 million times. Fifty days after its release, it had been downloaded 50 million times. Recently, both Draw Something and Omgpop were bought by the game giant Zynga for $180 million. Weight Loss Discovery Making National Headlines Last Updated: 4/06/2014 20:52 PST Did you know you can lose weight without traditional dieting? That’s what one new weight loss product wants you to believe. It’s called the SENSA® Weight Loss System, and it’s one of the most talked-about weight loss products on the market today – featured in The New York Times, Time Magazine, and Dateline NBC. SENSA® boldly claims to help users lose weight.

FlexCare Travel Nursing - Why FlexCare We hate negotiating salaries too, so we developed our high pay, no hassle pledge so you know the compensation we quote for an assignment is the absolute best you can receive. We're not interested in shaving a few pennies off and leaving you unhappy with your paychecks - we want to build a long-term relationship with you as you travel from one assignment to the next. So don't worry about feeling the need to negotiate the pay rate you see next to a job, because it's the highest we can offer, and we know it's one of the highest anyone in the nursing industry will offer too. Plus, unlike most staffing companies, our Recruiters aren't incentivized on Profit Margins. To us, it doesn't seem right that a Recruiter would get more money by paying you less. At FlexCare, you and your Recruiter's motivations are aligned - and the focus is finding you the perfect assignment.

How to make the bass in your car sound its best A pair of Kenwood subs in a Sound Ordnance enclosure One of the things I like most about subwoofers is that I can feel the musical emotion directly with my body. The low frequency beat often forces me to dance around, or, at the very least, nod my head along with the rhythm.