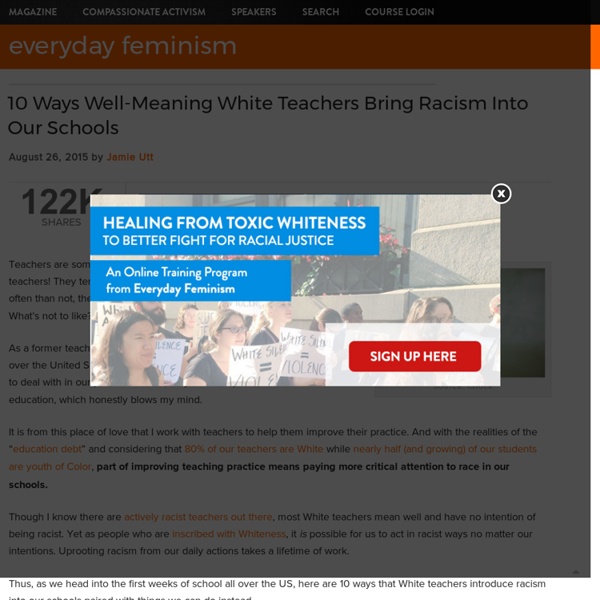 ‘Ally’ Is Not An Identity A series of interactions on Facebook and Twitter have left me a bit jaded and cynical when it comes to people who call themselves “allies.” It seems as though these people have missed some very important memos about what that word really means, so I am here to clear the air. You are not above reproach. Just because you’ve volunteered a few times or occasionally speak out against discrimination does not mean you can do no wrong. Dear White Allies, I’m Not Really Interested In Being An Ally With You – Onyx Truth When I first started this site, the intentions of the site was to basically just let people vent about whatever they felt like venting about in life. That was pretty much it. Rather quickly the site began to focus primarily on the severe issues facing Black society that primarily dealt with issues concerning racism, white supremacy, & police brutality. During the process of writing and podcasting on this site I was introduced to a bunch of white people who called themselves “white allies” to a degree.

4 ways you as a white person can reduce your complicity in white supremacy - RESIST When people think of white supremacy, they think of Nazis, of white guys with shaved heads and combat boots, or of white men under hoods burning crosses and calling themselves 5th level supreme grand wizard dragons or whatever fantasy nonsense they call themselves. They are part of white supremacy, but they’re not what keeps it alive and well. The complacent attitude of good white people is what really keeps white supremacy going. People tend to treat racism like it’s something that will solve itself. A guide for straight and cisgender allies in LGBTQIA+ spaces - RESIST Last year, I was getting ready for a wonderful New Year’s Eve with my friends and chosen family. It was a bittersweet night, too, because it was the night our local lesbian nightclub, Wall Street, would be shutting its doors for the last time. Although I wouldn’t be there at its last show because I’d decided to host my own party, I knew I would treasure my memories of it — the burlesque, the drag shows, the drinks, the dancing, and, of course, all my lovely queer friends that I went there with. But that very morning, I heard it — a man’s arrogant voice coming from somewhere in my office building: “I’m definitely going out to Wall Street for New Year’s tonight to look at the freaks!” The freaks? I thought.

Children learn sexism at school – so that's where we should begin to fight it High-profile cases in Rochdale and recent reports into gangs suggest that the sort of girls who are harrassed and abused are weak and friendless, girls whose chaotic homes lives leave them vulnerable. Yet, while law-abiding parents are reading these stories as if they are missives from Mars, harassment and sexism has become an everyday reality for their daughters. What is new and most worrying about today's report from the biggest girls' youth organisation in the country, Girlguiding UK, is how prevalent sexism still is among children. While it is still fair to say that those at the margins of society are suffering the most egregious injustices – girls dragged into gangs and made to feel that rape is "normal", refugees sold for sex to pay for their fare – here is a report that is difficult to explain away as marginal. Nearly 1,300 girls, some as young as seven, took part in the survey, and come from every part of the country and each social class. Why is this happening?

Six tips for working in solidarity with Muslim women - RESIST Every few days, I get an inbox message, e-mail, or in-person question along the lines of “How do you reconcile your Muslim faith with feminism? You’re an adamant feminist, but always defend and uphold your Muslim identity. How?” The question can deviate between the fine line of carefully polite and entitled savior. But it’s common for many people to dismiss Muslim women as feminists. This, of course, in and of itself is not a feminist action. Dear white people: Your comfort makes you bad allies - RESIST Donald Trump won the election, and people of color have been scared about their futures because the president-elect is literally a figurehead of white supremacy. If you are white and not marginalized in some way, chances are that you’re worried, but your future is pretty comfortable. If you want to be a good ally, then it’s time for you to get uncomfortable.

Ontario schools will offer gender studies, thanks to five young women: Porter How might Rehtaeh Parsons’ life been different had her school offered a gender studies course? “Instead of talking about what the girl did and how ‘she had this coming to her,’ the focus might have been on ‘how these guys go through life not knowing about consent?’ ” says Lara Shkordoff. “It would have provided a safe space for students to talk about these things,” says Sarah Ghabrial. The Truth About Gender and Math New data about the science aptitude of boys and girls around the world inspires me to re-post this discussion from 2010. Math ability, in some societies, is gendered. That is, many people believe that boys and men are better at math than girls and women and, further, that this difference is biological (hormonal, neurological, or somehow encoded on the Y chromosome). But actual data about gender differences in math ability tell a very different story.

Debunking Myth That Girls and Boys Learn Differently Caryl Rivers says that in education, gender is irrelevant. “What really matters in the classroom,” she says, “is parent involvement, teacher quality, class size, and of course, social class.” Photo by Vernon Doucette Caryl Rivers has had a long and varied journalism career, writing about Vietnam, the women’s movement, political correctness, and most recently, the dangers of gender stereotypes. Her newest book, “a bracing antidote to conventional wisdom,” according to the education editor at Bloomberg News, is The Truth about Girls and Boys: Challenging Toxic Stereotypes about Our Children (Columbia University Press, 2011).

Gender in the Hidden Curriculum The hidden curriculum refers to the unspoken and unofficial norms, behaviors, and values that kids learn at school in addition to the official curriculum of math, reading, science, and so on. These can include expectations about how to act in public (standing in line), how to interact with non-parental authority figures, patriotism (saying the Pledge of Allegiance each morning), and messages about social hierarchies (who it’s ok to ridicule, what it means to get different grades), and so on. Gender is an important element of the hidden curriculum.