The 25 most powerful people in fashion 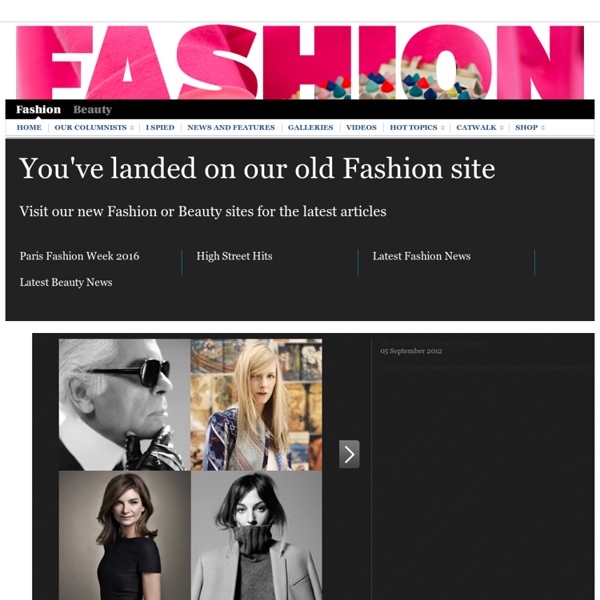 H&M is Reportedly Focusing on its "Ethical Profile" — The Fashion Law courtesy of Reuters Swedish fashion company Hennes & Mauritz is reportedly focusing on its ethical profile to drive long-term sales growth as shoppers become more interested in how clothes are produced as well as their environmental impact, its new sustainability chief said. The fashion industry has come under increasing pressure to cut water use and pesticides in cotton farming, reduce pollution from textile factories and improve factory conditions, particularly after the collapse of the Rana Plaza complex in Bangladesh two years ago.

Kendall Jenner Is Our September Issue Cover Girl She transcended childhood TV infamy, the paparazzi—even her own famous family. Never content to merely keep up, Kendall Jenner is simply owning it. On a Tuesday morning in June I meet Kendall Jenner in the lobby of her high-rise in Westwood, that weird part of L.A. that seems to want to be part of a different city, like Dallas or Atlanta. Here’s Why This Model Took Off Her Heels at Yeezy Season 4 Share Video Too hot for haute couture! Kanye West’s Yeezy Season 4 fashion show on Wednesday, September 7, wasn’t necessarily easy street. Some of the attendees complained about the conditions (it was in the high eighties!) Fashion & Power: Karl Lagerfeld’s Influence by Angela Ghang Karl Lagerfeld is a celebrated renown couture designer who can bring style and shape to any design fitting a modern, classy and edgy look with eccentric colors. Born in 1938, one year before Coco Chanel retired from the Fashion House of Chanel, they say he was destined to take over the empire of Chanel. At a young age Lagerfeld moved to Paris and worked as a draftsman sketching costumes. In 1955 he won 1st place at the International Wool Association, where many designers and couture house took note of Lagerfelds design and style.

How Diane von Furstenberg Became The Woman She Wanted To Be - ForbesLife Photo by Timothy White/E! In her new memoir The Woman I Wanted To Be, Diane von Furstenberg details her extraordinary life – from her fairy tale marriage to a prince to the creation of the iconic wrap dress. Yet despite the 67-year-old’s successful career, the memoir is not just about fashion, though it is ripe with business and life advice; rather it is an ode to New York, to love, to family. Most importantly, it is about living as the woman you want to be. For von Furstenberg, that means independent, resilient, perhaps a bit stubborn. Always looking to the future, and adapting to change, while embracing love and passion.

Apple Has Teamed up With Hermès for Apple Watch Collab — The Fashion Law After poaching a number of fashion industry insiders, Apple is teaming up with one of the most iconic brands of all: Hermès. Today at its "Hey Siri" event in San Francisco, the tech giant announced a partnership with the Paris-based brand, known for its $10k+ Birkin bags, to create a special Apple Watch collection called Apple Watch Hermès. Per Mac Rumors, “the new collection will feature three brand new bands and watch faces. How Fashion Is Framing Olympic Athletes for Rio 2016 LONDON, United Kingdom — “Fashion doesn’t exist in a vacuum,” says British Vogue’s deputy editor Emily Sheffield. “It’s a part of everyday conversation [so] Vogue has always focused on a wide variety of personalities: performers, writers, artists, politicians — and sportsmen and women too.” Called “Fighting Talk,” Sheffield’s recent feature of British female champion boxer Nicola Adams is just one of the many examples of glossy magazines around the world giving Olympic athletes a spotlight in recent months. In the run-up to the 2016 Summer Olympic Games, kicking off in Rio de Janeiro this weekend, publications from the Chinese and Swedish editions of Elle to the Brazilian and Australian editions of Vogue have showcased an international constellation of top athletes , through a variety of narratives. These editorials are a testament to the increasingly interconnected nature of sports and fashion.

Rihanna Teases Every Piece From Her FENTY PUMA FW16 Rihanna and PUMA spent the summer dropping shoes right and left, including furry pool slides, low-cut creepers and a mesh-laden trainer. But as exciting as this bevy of footwear is, it pales in comparison to the duo’s upcoming FENTY FW16 collection. We can now give you the grand reveal of every single piece from the upcoming line. And what a line it is. In stark contrast to their colorful footwear offerings, the FENTY line is almost exclusively comprised of black and white, broken only by the occasional splash of grey.

FASHION / Kaiser Karl's cul-de-sac: For ten years, Karl Lagerfeld has ruled international fashion. He made Chanel the status label for the Eighties, then took on every other spare label in sight. But now, the spirit of Coco Chanel is back in fashion, and And so she did, and went on - as we all know - to change the way women dress forever. When she cut a man's pullover down the front, trimmed it with ribbon and shrugged it on because she was feeling chilly in Deauville, Coco Chanel was just making herself comfortable. But it was the beginning of a design revolution and the simple cardigan jackets with the high-cut armholes, those supple suits made from the men's underwear jersey, encouraged women around the world to ease up, too. If Cocteau were drawing today, it would be Karl Lagerfeld who was leaving. The modern woman in the foreground would be wearing something by, say, Ann Demeulemeester, or Calvin Klein, Martin Margiela or Rei Kawakubo. For we are not now in a Chanel moment, or at least in a Chanel-Lagerfeld moment.

Women's fashion now mainly influenced by stars like Cara Delevingne 48 per cent of women say celebrities impact strongest on personal styleNew survey reveals only 31 per cent turn to best friend for style advice 14 per cent of women aged 18-35 ask mother's opinion on clothes first By Caroline Mcguire for MailOnline Published: 13:23 GMT, 16 November 2014 | Updated: 15:44 GMT, 16 November 2014 Almost half of women trust celebrities more than their own friends and mothers when it comes to personal style. Stars including Kim Kardashian, Cara Delevingne Victoria Beckham and the Duchess of Cambridge have become increasingly influential in fashion. Kim Kardashian is often seen front row at shows like Balmain, Givenchy and Balenciaga, while Cara has recently designed a backpack for Mulberry and an entire clothing range for DKNY.

Stella McCartney’s fake-fur coats are worlds away from the brutal fur trade In an industry where designers rarely take an admirable position on anything, Stella McCartney’s opposition to animal cruelty has been consistent and vocal. So it was a surprise for the fashion press when she sent voluminous fake-fur coats down the runway at Paris fashion week. Of her decision, McCartney said: “I’ve been speaking to younger women about it recently and they don’t even want real fur. So I feel like maybe things have moved on …” Something similar previously happened with food. In the freezer cabinets at the supermarket you’ll likely find the fake-meat products championed by McCartney’s mother, Linda.

Fast fashion online business have made a fortune for owners of businesses like Zara — Quartz In its first seven years of existence, Uber has irked cities, flouted regulators, and petrified whole industries. It has yet to make money but is worth a fifth more than BMW and almost a third more than General Motors, both the owners of tons of futuristic technology, tens of billions of dollars in capital equipment, and big profits. In recent deals resembling famous speculative bubbles, rich investors eager for a piece of this juggernaut have poured hundreds of millions of dollars into custom funds that provide exposure to Uber but no equity or financial disclosure. Which is to say that investors have made a one-way, uber-bullish bet on Uber, forecasting that the company will be at the center of an utter transformation of our collective lifestyle. If not everyone is betting on it, they’re at least not betting against it. Even if you wanted to short Uber, it is generally thought impossible to do.

Gigi Hadid Introduces Tommy x Collection - Gigi Hadid's Favorite Spots In New York City As told to: Sarah Cristobal and Photographs by: Bjorn Iooss; Fashion Editor: Joanna Hillman In the past year, the cultural zeitgeist has, quite literally, found its way to Gigi Hadid's doorstep. On the morning of our shoot, there are three paparazzi waiting outside her New York home. Her security team manages to lose them while winding their way through SoHo, but it doesn't take long before they track down our setup outside the Mercer hotel. Not only have they found us, but they've also multiplied. At one point I count 20 jockeying for position in their own Gigi-fied trance.

are real people the new faces of fashion? "Of course a lot of people are underrepresented in fashion," says photographer and Hood By Air casting director Kevin Amato. "I did an editorial maybe five years ago for a big house and I shot all black boys and the house banned me from shooting their clothes for the whole season." But, says Amato, things are changing. "Now I look and I see diversity.