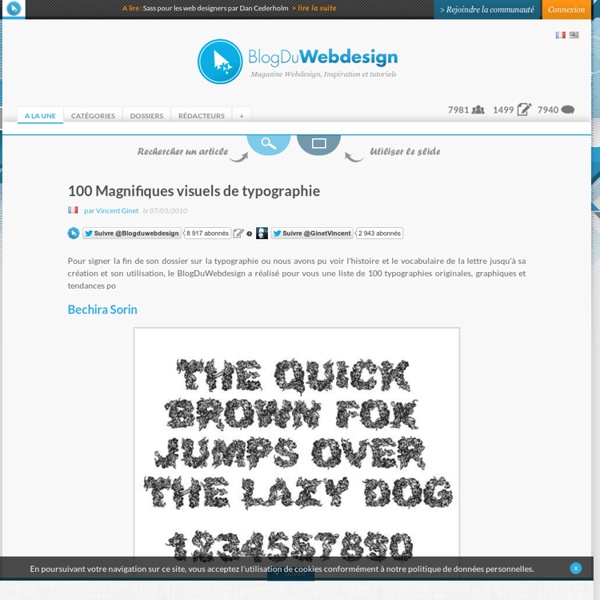 World's First: An Apple Store for Type Geeks [Slideshow] | Co.Design Playtype.com, one of Europe's preeminent online font foundries, has opened a gorgeous brick-and-mortar shop in Copenhagen dedicated to flogging digital typefaces. Customers can walk in off the street and buy fonts loaded on USBs that resemble little credit cards. The shop also sells a ragbag of typographic gifts and paraphernalia, including T-shirts, posters, and even wine (no idea if it's any good, but the bottle sure looks purdy) -- all in a space done up in a lovely black-and-white motif that is itself a monument to typography. E-Types, the Danish design agency behind Playtype.com, bills the shop as "the first of its kind" in the world. So what's the idea here? The shop will be up for one year only, so you'd better book your plane ticket to Copenhagen like yesterday. [Images courtesy of e-Types]

Adrian Frutiger Adrian Frutiger (born May 24, 1928 in Unterseen, Canton of Bern, Switzerland) is a typeface designer who influenced the direction of digital typography in the second half of the 20th century and into the 21st. He is best known for creating the Univers and Frutiger typefaces. Early life[edit] Adrian Frutiger was born in Unterseen, Canton of Bern, the son of a weaver. As a boy, he experimented with invented scripts and stylized handwriting in negative reaction to the formal, cursive penmanship then required by Swiss schools. His early interest in sculpture was discouraged by his father and by his secondary school teachers; they encouraged him to work in printing. Formative years[edit] Work summary[edit] Specimens of typefaces by Adrian Frutiger. An Illustration showing the typefaces Frutiger Serif and Frutiger Next in use. In the late 1990s, Frutiger began collaborating on refining and expanding the Univers, Frutiger, and Avenir, in addressing hinting for screen display. Typefaces[edit]

A Look Into: Fonts Used In Logos of Popular Brands Do you find yourself staring at other designer’s logo and immediately try to decipher what typeface they are using? If you are a designer, it is probably an inevitable habit. There are no hard and fast rules to help you determine which typeface you should land on for your logo. If you have experimented hundreds of fonts but they just don’t work out right for you, suffering from design block where you don’t what font to use or you are just curious on what fonts others are using for their logo, this article is for you. Zopa.com Many top websites are trending towards gray color schemes with bright color splashes. Font used: Frankfurter medium Shutterfly Shutterfly’s modern logo is simple, refined and playful. Font used: Frutiger NewsGator Multi-colored logo fonts are all the rage these days as shown in NewsGator’s logo. Font used: ITC Bauhaus Shoutwire Many caution against excessive capitalization in logo fonts. Font used: Agency Bold Shozu Font used: FF Cocon Bold Facebook Font used: Klavika Twitter

Gallery of Unicode Fonts Typographic Design Patterns and Best Practices - Smashing Magazine Advertisement Even with a relatively limited set of options in CSS, typography can vary tremendously using pure CSS syntax. Serif or sans-serif? To find typographic design patterns that are common in modern Web design and to resolve some common typographic issues, we conducted extensive research on 50 popular websites on which typography matters more than usual (or at least should matter more than usual). We’ve carefully analyzed their typography and style sheets and searched for similarities and differences. Ultimately, we identified 13 general typographic problems and issues related to typographic design and tried to find answers to them through our research: How popular are serif and sans-serif typefaces in body copy and headlines? We ended up with solid data, which we evaluated and prepared for this article. 1. Whether designers should use serif or sans-serif fonts for body copy is one of the most discussed and unresolved questions about typesetting on the Web. 2. 3. 4. 5. 6. 7. (al)

Six Super Helpful Typography Cheat Sheets Some may argue that typography is the single most important aspect of web design, but yet it’s often one of the most neglected and overlooked. There’s a lot involved in typography, and becoming a master can be difficult. A lot of it requires much experience, practice, and knowing the rules and do’s and dont’s. Nevertheless, there’s a lot to remember. So to provide a little typography aid, we’ve rounded up Six Super Helpful Typography Cheat Sheets. So You Need A Typeface Mixing Typefaces Web Safe Font Cheat Sheet Common fonts to all versions of Windows & Mac equivalents CSS Typography Reference Sheet CSS Font Shorthand Property Cheat Sheet About the Author Henry Jones is a web developer, designer, and entrepreneur with over 14 years of experience. Related Posts 918 shares 20 Amazing Examples of Typography Sketches for Your Inspiration Often we’re critical about the end design, but behind the scenes a lot of process go to work, and one of which is sketching. Read More 938 shares

â Systems for pagesâ - Blog - John D. Berry dot com Books are digital. This is not, strictly speaking, true; but it’s about to be, with a few honorable exceptions. Already today, pretty much all commercial books are produced digitally, although the end product is a physical one: ink printed on paper, then bound and marketed and sold. Already, the selling may be done as often online as in a bookstore. Already, the same books are being issued more and more in electronic form – even if, as yet, the e-books are mostly very shoddy in conception and execution. But that will change. So what’s needed? Last question first. But e-books present a challenge that printed books do not: the page isn’t fixed and final. For a real system of flexible layout in e-books and e-periodicals that might be viewed on any number of different screens at different times, what’s needed is a rules-based system of adaptive layout. The requirements for this are easy to describe – maybe not so easy to implement. A constraints-based system of adaptive layout Media query.

72 Creative And Smart Typographic Logo Inspiration | Graphic and If we are starting to go crazy in typography style, then let’s continue with typographic and smart logo designs, shall we? Here you’ll find 72 beautiful logos created by talented designers. This showcase just proves the point how much can one/two words, icons tell using correctly white, negative, positive spacing, colors, accents creating interesting associations. Explore and get creative as I did! 1. Who killed letter i? 2. Really smart logo! 3. Typeface: word-play: face from the type and letter T. 4. Just loving this logo, great stylization! 5. Very popular logo already, but thought I still share it in typography section. Author’s comment: “Logo was made for a bold creative team consisting of two people. 6. Just smart logo, which rings the bell! 7. Author’s comment: “Gizzy bear is how a little kid might say grizzly bear. Just genius! 8. Simple, artistic and very clever – all in one place! 9. Very good logo – yes, sticky! 10. Oh, snap – logo with very clear message. 11. 12. 13. 14. 15. 16. 17.