Play Geography Games and Learn About the World 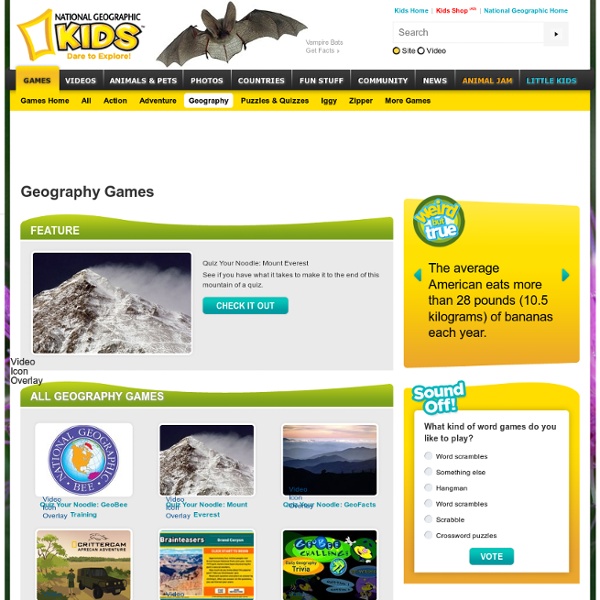 MapTiler - Map Tile Cutter. Overlay Generator for Google Maps, Google Earth (KML SuperOverlay). US President Learning Games For Kids US President Games US President Games Kids love to learn online with cool games and songs! Infographic of the Day: How the Global Food Market Starves the Poor To understand the complexities of the international food market--and how traders in Chicago can cause Africans to starve--you could get a ph.D. in economics, or read a 400-page report from the World Bank. Or you watch this superb nine minute video, directed by Denis van Waerebeke. Though ostensibly created for a science show in Paris for 12 year olds, it's actually probably waaaay over a kid's head. Just watch--it's excellent, and very well illustrated: The video begins with a basic question: How is it that the first world has an oversupply of food, while 1 in 7 in the world go malnourished? Basically, farmers in developing countries have eschewed growing local food crops in favor of growing things like cotton for international export. That can have disastrous effects. The solutions will involve everyone, the world over. Still hungry for more infographics videos? [Via Infosthetics]

Desert Biomes by DesertUSA Union Post of Fort Craig Paddy Graydon's Mule Bombs - Union Captain James "Paddy" Graydon had a plan, and every soldier who had ever served with Paddy Graydon understood that things could get dangerous in a hurry whenever that Irishman had a plan. They said he was "reckless" and "arrogant." They said he was a "daredevil" and a "braggart." And they revered him. They knew that in campaigns against Apaches, Navajos and outlaws across New Mexico, Arizona and northern Mexico, Paddy Graydon had proven himself to be "fearless" and "indefatigable." Now, every soldier at the Union post of Fort Craig, on the west bank of the Rio Grande in central New Mexico, hoped that Graydon's latest plan would work. Billy the Kid William Bonney - Some people say that he was a "psychotic moron from the slums of New York". Billy the Kid was born in 1859, most likely in New York City. Stories of Gold Dazzling Predators Featured Video Last Week's Top Story Desert News

Geography - How Do You Define A Country? When people ask how many countries there are in the world,they expect a simple answer. After all, we've explored the whole planet, we have international travel, satellite navigation and plenty of global organizations like the United Nations, so we should really know how many countries there are! However, the answer to the question varies according to whom you ask. So why isn't there a straight forward answer? The problem arises because there isn't a universally agreed definition of 'country' and because, for political reasons, some countries find it convenient to recognize or not recognize other countries. For example, Taiwan claims to be a country, but China states that Taiwan is just another part of China. So, how do governments define what makes a country? There are three terms you come across when you try to discover how countries are defined. The Montevideo Convention Constitutive theory of statehood Declarative theory of statehood 1. (a) a permanent population; (b) a defined territory;

Fun Kids Online Math Games "Sheppard offers everything from early math to pre-algebra. The lessons include interactive activities to practice concepts. Students can shoot fruit, pop balloons, and even play math man (the math version of pac man!). Fractions, place value, money, and basic operations are some of the areas that are covered. Check it out at " --Shannon Jakeman , sjakeman.blogspot.com "Online math games, like the ones that you'll find for free at Sheppard Software, provide a valuable opportunity for children to learn a great deal while they're having fun. It can be very difficult for parents to find productive and worthwhile activities for children on the Internet; however fun online math games do offer a wonderful alternative. This free section of Sheppard Software was written for children. Sheppard Software offers a couple of cute games for the youngest math students.

Global Food Disparity: A Photo Diary In an increasingly globalized world, it’s still sometimes shocking to see just how disparate our lives are compared with other human beings around the world. A book of photographs by Peter Menzel called "Hungry Planet: What the World Eats" ("©Peter Menzel www.menzelphoto.com. Ten Speed Press, published in 2005) makes a relevant point with great irony: at a time when hundreds of millions of people don't have enough to eat, hundreds of millions more are eating too much and are overweight or obese. In observing what six billion eat for dinner the authors note, "Today, more people are overweight than underweight." It is these cultural differences, emphasized and reinforced by the author, which exemplifies the lifestyles and dietary habits of people around the world. You can buy the book here. Meet the The Manzo family of Sicily. Germany: The Melander family of Bargteheide Food expenditure for one week: 375.39 Euros or $500.07.