Makerspace in the Library! 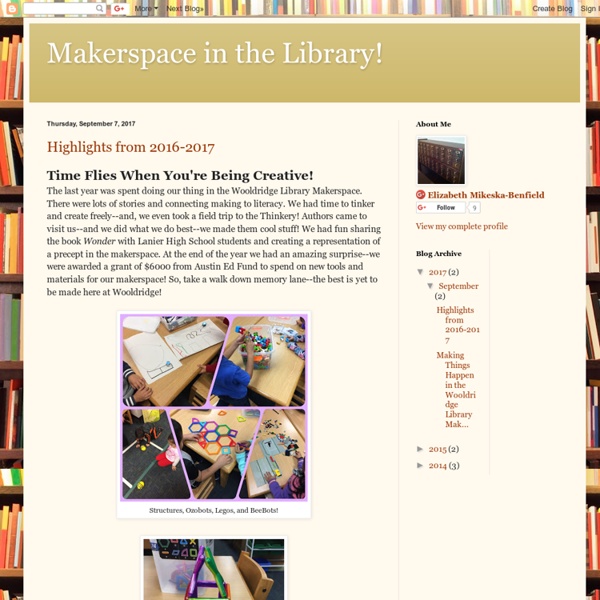 The (Latecomer) Beginner's Guide To Minecraft Minecraft first came out in 2009; but just a few weeks ago it debuted on the current console generation. What makes this game endure, 5 years later – with over 15 million licensed players on the PC/Mac alone? It’s awesome, that’s what. If you’re late to the party though, don’t worry – this extensive beginner’s guide has you covered. Why Minecraft? It easy to dismiss Minecraft as an indie game that really ought to have hired some better digital artists, but if you can get past the giant blocks of ugliness you’ll be sure to find at least one aspect of the game that really appeals. For some, it’s about the adventure. For others, it’s the creative freedom allowed. For others, it’s about mastering the complex systems of crafting redstone machines, or the simple pleasures of farming – establishing a sustainable food and resource chain. Mobile versions (the “Pocket Edition”) differ slightly, and this guide was written from the perspective of PC gameplay. Game Modes Basic Controls Crafting Combat

Makerspace Resources and Programming ideas | Create, Collaborate, Innovate Create Collaborate Innovate Posts on Making Sign up for this MOOC offered by Exploratorium: Tinkering FundamentalsSign up for Google’s Maker Camp and Google Science Camp.Follow and read the blog over at Exploratorium’s Tinkering Studio or sign up for their tinkering course!Find cool stuff and Make it at your Library! Favorite Maker Tools Invent to Learn by Sylvia Martinez and Gary StagerInvent to Learn Guide to Fun by Josh BurkerScript Changers: Digital Storytelling with Scratch by Kylie PepplerSoft Circuits by Kylie PepplerShort Circuits by Kylie PepplerArt of Tinkering by Karen Wilkinson and Mike PetrichMakerspace Playbook by Maker MediaBig Book of Makerspace Projects by Me! Check out these Great Blogs from other Makers The Tinkering Studio Blog : This R&D lab on the floor of the Exploratorium is a maker’s dream! More Great Books for Your School Library Makerspace Diana Rendina has a great post and pinterest board on this topic! I’ve learned so much from my Twitter PLN. Like this:

Makerspaces, Participatory Learning, and Libraries – The Unquiet Librarian The concept of libraries as makerspaces first hit my radar last November when I read about the Fayetteville Free Library’s FabLab. As I began hearing more buzz about libraries and makerspaces the first few months of this year, I decided that learning more about this concept and exploring how I might apply the elements of makerspaces to my library program would be a personal learning project for the summer. So what is a makerspace? Makerspace defines it as: Modeled after hackerspaces, a makerspace is a place where young people have an opportunity to explore their own interests, learn to use tools and materials, and develop creative projects. It could be embedded inside an existing organization or standalone on its own. The Library as Incubator Project describes makerspaces as: In late spring, I was even more intrigued by the concept as my friend and colleague Kristin Fontichiaro began sharing some of her thoughts on makerspaces and the possibilities for school libraries. Like this:

uTEC Maker Model he uTEC Maker Model visualizes the developmental stages of creativity from individuals and groups as they develop from passively using a system or process to the ultimate phase of creativity and invention. As illustrated in the model below, there arefour levels of expertise. A Makerspace participant begins at the Using level. A User enjoys engaging in an activity to sample something new. Here individuals or groups use a tool, device, or program in the way—and for the purpose— the inventor intended. Examples include learning how to, then playing the computer game, playing the musical score, or using a software program pretty much the way it was designed to be used. We recognize high levels of skill and perhaps even addictive behaviors on the part of these consumers, but they are still just at the consuming level. At the Tinkering level, the user begins to fiddle with or retry things that the original creator did not intend or build into the invention or instructional pattern.

Launching a Makerspace: Lessons Learned From a Transformed School Library | MindShift | KQED News Excitement about school makerspaces has been in the air, but many educators eager to create hands-on learning spaces in their schools still aren’t sure how to get started or why it’s worth the effort. New Canaan High School librarian Michelle Luhtala recently jumped headfirst into creating a makerspace in her library and documented what she learned, how her space changed and how it affected students along the way. Her experience was very different from elementary school librarian Andy Plemmons, whose makerspace started with a 3-D printer obtained through a grant and blossomed into a core teaching resource at his school. Luhtala is blessed with a big library, but for most of her career it has been dominated by large bookshelves. Over time, Luhtala has pared down her collection as she increased the digital reading material the library offers, but in order to make room for a makerspace she cleared out 7,000 books. A floor plan of shelving in Luhtala’s library in 2011.

Active Learning | Kristin Fontichiaro's Blog About Learning, Teaching, Making Things, and Libraries Building professional capacityTeacher-librarians are well positioned to impart data literacy to teens, but who’s giving instructors the resources and support that they need to do so?Kristin Fontichiaro, clinical associate professor at University of Michigan’s School of Information, and Jo Angela Oehrli, learning librarian at University of Michigan Library, were up for the task. As principal investigators of the two-year IMLS-funded project “Supporting Librarians in Adding Data Literacy Skills to Information Literacy Instruction,” they set out to design materials for high school librarians looking to foster data and statistical literacy skills in their students.“We were seeing on our own campus that data was becoming a powerful mode of expression and wasn’t working in ways that information literacy always works,” says Fontichiaro.

8 Design Steps for an Academic Makerspace -- THE Journal Hands-on Learning Page 2 of 2 8 Design Steps for an Academic Makerspace "Without this component, we see a lot of failures," he added. Jarowski also said that teachers could find interesting lesson plans that involve makerspaces online. 4. Jarowski warned against buying anything online that seems extremely inexpensive because they are likely to be knock-offs of dubious quality and offering no support. Safety is important, too, so you must also budget for goggles, gloves, aprons, lab coats and a fire extinguisher. 5. "Media specialists love this stuff, so it is good to get them involved, Jarowski said. On the other hand, some aspects of makerspace work make a lot of noise and may not mesh well with other uses of the library. 6. 7. You should have both high-tech and low-tech areas, and clean and messy areas, with separate workstations for different types of activities. 8. About the Author David Raths is a Philadelphia-based freelance writer focused on information technology.

How to Start a Makerspace When You're Broke Everyone’s Favorite Excuse I’ve had the honor and privilege of sharing with hundreds of librarians and educators about our makerspace. Unfortunately, I see many educators hold back on starting a makerspace because of funds. “I’d love to do (insert cool Maker activity) at my school, but we don’t have a budget for that.” What many people don’t realize is that the idea that you need a lot of money to start a Makerspace is a myth. Share Your Vision with ALL THE PEOPLE You want to start a makerspace. Recycled materials can make for awesome projects Seek out Donations Never discount the value of donated materials. Consider putting out a bin for donations of recycled materials. We first started our makerspace with bins of K’nex found in a storage room Work with What You’ve Got Since you’ve started sharing your vision, you might have found out that your school already has some maker supplies lying around. Our Epic LEGO Wall was funded through DonorsChoose Crowdfund Your Makerspace Go Make Stuff :)