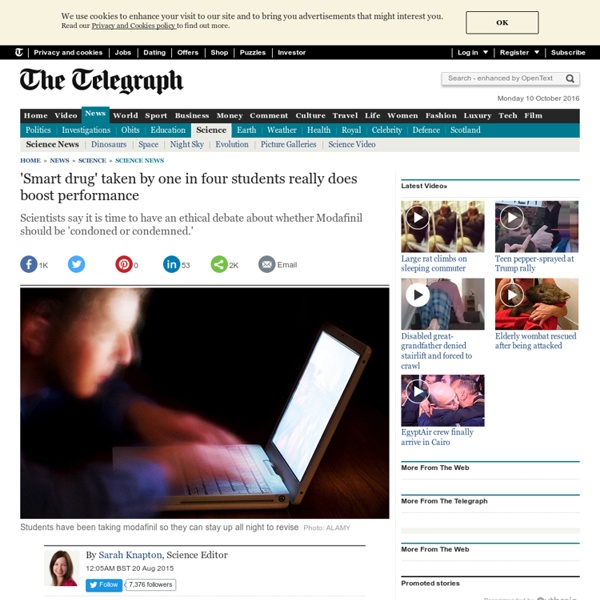 Dr Ruairidh Battleday said: “Modafinil can and does enhance some cognitive functions. “For the first time, we have a cognitive enhancer that appears not to have significant detrimental cognitive, emotional, or physical side effects. “This means that it is time for a wider societal debate on how to integrate and regulate cognitive enhancement . Modafinil is taken by up to one in four students at British universities Photo: ALAMY A survey run by the Oxford University student newspaper The Tab showed that 26 per cent of students at the university said they had used it. Modafinil is usually prescribed to treat sleeping disorders and has been used in the past by the US Air Force to keep pilots alert during long distance flights. But doctors have anecdotally complained that they are being forced to give students valium to manage withdrawal after exams because it effects sleep patterns so badly.

5 disturbing drugs that you never wanted to know about We’ve all been subjected to that terrible ‘This is your brain on drugs’ video where they fry an egg. The only thing that video ever did was make me hungry for breakfast food. In my opinion, if the public school system wants to scare kids away from doing drugs, they should put on a screening of Requiem for a Dream at the school assembly. More commonly known as Ambien, this prescription sleeping pill was developed to treat insomnia. Photo credit: Azlin Ahmad Yes, that’s right – the stuff you generously sprinkle on your eggnog around the holidays is a hallucinogenic. Named for its molecular structure, which resembles a dragonfly, this drug is essentially a super-charged version of LSD. 2,4-Dinitrophenol is an industrial chemical that became popular among those who wanted to lose weight – without doing the work. Popular in Russia, this DIY drug is cheap and can be easily made with just a single trip to your local pharmacy and hardware store.

Drug lets eczema sufferers be 'comfortable in their skin' A drug that treats rheumatoid arthritis appears to offer a new way to treat people with moderate to severe eczema, a small study suggests. The drug also seems to reverse two other disfiguring skin conditions: vitiligo and alopecia areata. “I’m hopeful we are entering a whole new era in treatment.” Eczema (atopic dermatitis) is a chronic condition that causes severe itching and leaves the skin red and thickened. It can adversely affect sleep and quality of life—and standard treatments, such as steroid creams and oral medicines, commonly fail to relieve symptoms. “Eczema affects millions of children and adults in the United States,”says Brett King, assistant professor of dermatology at Yale University. Dramatic improvement Based on current scientific models of eczema biology, researchers hypothesized that a drug approved for rheumatoid arthritis, tofacitinib citrate, would interrupt the immune response that causes eczema. Alopecia and vitiligo [related] Source: Yale University

Over the Counter Pain Reliever Found to Blunt Emotions Like Joy Heather Callaghan, ContributorWaking Times It’s been about 12 years since Equilibrium quietly arrived in theaters, only to become better known as the years went on. The dystopian flick about the forced removal of emotions – i.e. any shred of humanity – through mandated injections was quite the extreme allegory to average viewers. But perhaps you looked around and saw the “desensitizing metaphor” in all kinds of things in this twisted bumpy stop we call reality. Fluoride, prescription drugs, antibiotics and other things that wipe out the gut (second brain), television programming, heavy metal and chemical exposure, schooling, etc… A good many things keep consciousness quelled by various forms of suppression. So, it’s not too surprising to discover that over-the-counter medicines like Tylenol can steal smidgens of joy too. Ohio State University researchers found a bizarre and previously unknown side effect when taking acetaminophen – the main ingredient in Tylenol. About the Author

Drug used to treat cancer appears to sharpen memory: Clues to keeping brain cells alive in those with Alzheimer's -- ScienceDaily Can you imagine a drug that would make it easier to learn a language, sharpen your memory and help those with dementia and Alzheimer's disease by rewiring the brain and keeping neurons alive? New Rutgers research published in the Journal of Neuroscience found that a drug -- RGFP966 -- administered to rats made them more attuned to what they were hearing, able to retain and remember more information, and develop new connections that allowed these memories to be transmitted between brain cells. "Memory-making in neurological conditions like Alzheimer's disease is often poor or absent altogether once a person is in the advanced stages of the disease," said Kasia M. Bieszczad, lead author and assistant professor in Behavioral and Systems Neuroscience in the Department of Psychology. "This drug could rescue the ability to make new memories that are rich in detail and content, even in the worst case scenarios."

foodandwine You may be planning a quiet evening in this weekend, but your brain could have other plans for you. New research from Texas A&M and the University of California, San Francisco says that when your brain and booze get together, they have a devious way of encouraging you to keep going back to the bar for one more drink. In a recently published paper in The Journal of Neuroscience, scientists say that alcohol is able to change neurons in the brain in a way that encourages the brain to want to drink more alcohol, and the more you drink over time, the more pronounced these changes can become. According to Futurity, researchers looked at two types of dopamine receptors in animals: D1 neurons, referred to as “go” pathways because they encourage behavior, and D2 neurons, referred to as “no-go” pathways because they inhibit behavior. The animals that were exposed to alcohol saw their D1 neurons “mature,” making them more susceptible to activation in the future.

Mind Control Techniques To Make Someone Love You When you purchase a course on how to attract someone into your life, or a dating course on how to use the right lines, these are techniques that are very easy to understand. All you have to do is modify your body language, and the things that you say, and you should be able to get a positive result. But there are courses out there that are not about interacting with someone in person with words or pickup lines. What Is A Mind Control Technique? There are several techniques that you can use to control the mind of another person. This will make you more mysterious, and when this is done the right way, you can attract women to you because they will want to know more about you based upon the way that you act. Direct Eye Contact You are probably seeing movies, or perhaps you have been to a psychologist, that has used regression therapy. When you are talking with someone that you would like to attract into your life, always make direct eye contact. All things begin with a thought.

Costa and Jackson: Three Gifts to Educators from the Genius of Reuven Feuerstein June 2 2014, Volume 1, Issue 4, No. 17 Art Costa has been writing and consulting about critical thinking for four decades. His writings focus on the theory called "habits of mind." Yvette Jackson is Vice President, National Urban Alliance and a life-long advocate for Feuerstein’s work and the need for children of color and poverty to have equal access to instruction and programs that provide them with critical thinking and problem solving skills. " Change the input and the brain changes accordingly." - Reuven Feuerstein Reuven Feuerstein is an Israeli clinical, developmental, and cognitive psychologist. As Director of Psychological Services in Europe after World War II, Reuven was responsible for assigning prospective Jewish candidates for immigration from the European continent to educational programs in Israel. The improvement made Feuerstein question the current beliefs regarding the notion of a fixed intelligence. Gift 1: Structural Cognitive Modifiability Gift 3: Mediative Environments

“We Are Trained To Misinform” – Ex-Big Pharma Sales Rep Speaks Out About The Deception In The Pharmaceutical Industry “There is no such thing as a safe drug.” This comes from ex-pharmaceutical sales rep and author of the book, Confessions of an Rx Drug Pusher, Gwen Olsen. For 15 years, Gwen was living an unintentional lie, working as a pharmaceutical sales rep for some of today’s largest pharmaceutical manufacturers, including Johnson & Johnson, Bristol-Myers Squibb and Abbott Laboratories. But through a gradual course of tragic events, Gwen’s eyes were eventually opened to the unethical and tyrannical truth about pharmaceutical drugs. “It was an awakening process, a spiritual and consciousness process where I started observing what was happening, what some of the drugs were doing, the misinformation, the disinformation. In her tell all book, Gwen writes about her years as a pharmaceutical sales rep, exposing the dirty secrets of the industry that often go untalked about. But in 2oo4, a family tragedy that tied into the corruption of the pharma industry would change everything for Gwen.