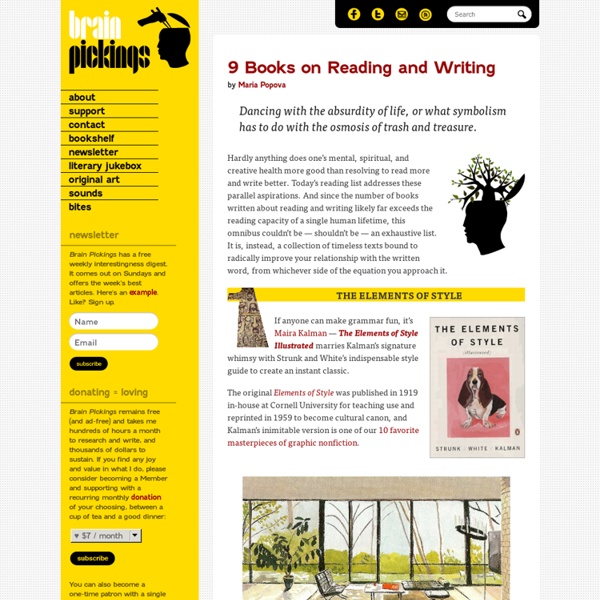 by Maria Popova Dancing with the absurdity of life, or what symbolism has to do with the osmosis of trash and treasure. Hardly anything does one’s mental, spiritual, and creative health more good than resolving to read more and write better. Today’s reading list addresses these parallel aspirations. And since the number of books written about reading and writing likely far exceeds the reading capacity of a single human lifetime, this omnibus couldn’t be — shouldn’t be — an exhaustive list. It is, instead, a collection of timeless texts bound to radically improve your relationship with the written word, from whichever side of the equation you approach it. If anyone can make grammar fun, it’s Maira Kalman — The Elements of Style Illustrated marries Kalman’s signature whimsy with Strunk and White’s indispensable style guide to create an instant classic. On a related unmissable note, let the Elements of Style Rap make your day. On the itch of writing, Lamott banters: On why we read and write:

7 Essential Books on Music, Emotion, and the Brain by Maria Popova What Freud has to do with auditory cheesecake, European opera and world peace. Last year, Horizon’s fascinating documentary on how music works was one of our most-liked pickings of 2010. But perhaps even more fascinating than the subject of how music works is the question of why it makes us feel the way it does. Today, we try to answer it with seven essential books that bridge music, emotion and cognition, peeling away at that tender intersection of where your brain ends and your soul begins. Six Tips on Writing from John Steinbeck By Maria Popova If this is indeed the year of reading more and writing better, we’ve been right on course with David Ogilvy’s 10 no-nonsense tips, Henry Miller’s 11 commandments, and various invaluable advice from other great writers. Now comes Pulitzer Prize winner and Nobel laureate John Steinbeck (February 27, 1902–December 20, 1968) with six tips on writing, originally set down in a 1962 letter to the actor and writer Robert Wallsten included in Steinbeck: A Life in Letters (public library) — the same magnificent volume that gave us Steinbeck’s advice on falling in love. Steinbeck counsels: Abandon the idea that you are ever going to finish. Lose track of the 400 pages and write just one page for each day, it helps.

7 Essential Books on the Art and Science of Happiness by Maria Popova From Plato to Buddha, or what imperfection has to do with the neuroscience of the good life. If you, like me, are fascinated by the human quest to understand the underpinnings of happiness but break out in hives at the mere mention of self-help books, you’re in luck: I’ve sifted through my personal library, a decade’s worth of obsessive reading, to surface seven essential books on the art and science of happiness, rooted in solid science, contemporary philosophy and cross-disciplinary insight. From psychology and neuroscience to sociology and cultural anthropology to behavioral economics, these essential reads illuminate the most fundamental aspiration of all human existence: How to avoid suffering and foster lasting well-being. The question of what makes us happy is likely as old as human cognition itself and has occupied the minds of philosophers, prophets and scientists for millennia. Human rationality depends critically on sophisticated emotionality.

5 Timeless Books of Insight on Fear and the Creative Process by Maria Popova From Monet to Tiger Woods, or why creating rituals and breaking routines don’t have to be conflicting notions. “Creativity is like chasing chickens,” Christoph Niemann once said. But sometimes it can feel like being chased by chickens — giant, angry, menacing chickens. Whether you’re a writer, designer, artist or maker of anything in any medium, you know the creative process can be plagued by fear, often so paralyzing it makes it hard to actually create.

Why We Love: 5 Must-Read Books on the Psychology of Love It’s often said that every song, every poem, every novel, every painting ever created is in some way “about” love. What this really means is that love is a central theme, an underlying preoccupation, in humanity’s greatest works. But what exactly is love? Why I Write: George Orwell's Four Motives for Creation by Maria Popova “All writers are vain, selfish, and lazy, and at the very bottom of their motives there lies a mystery.” Literary legend Eric Arthur Blair, better known as George Orwell, remains best remembered for authoring the cult-classics Animal Farm and Nineteen Eighty-Four, but he was also a formidable, masterful essayist. Among his finest short-form feats is the 1946 essay Why I Write (public library) — a fine addition to other timeless insights on writing, including Kurt Vonnegut’s 8 rules for a great story, David Ogilvy’s 10 no-bullshit tips, Henry Miller’s 11 commandments, Jack Kerouac’s 30 beliefs and techniques, John Steinbeck’s 6 pointers, and various invaluable insight from other great writers. I give all this background information because I do not think one can assess a writer’s motives without knowing something of his early development. Looking back through the last page or two, I see that I have made it appear as though my motives in writing were wholly public-spirited.

Springpad Get inspired. Get organized. Get more done. Get Started Get Started Get the App Get the App it's free! Creative Cartography: 7 Must-Read Books about Maps by Maria Popova From tattoos to Thomas More’s Utopia, or what Moby Dick has to do with the nature of time. We’re obsessed with maps — a fundamental sensemaking mechanism for the world, arguably the earliest form of standardized information design, and a relentless source of visual creativity. Today, we turn to seven fantastic books that explore the art and science of cartography from seven fascinating angles. Map As Art, The: Contemporary Artists Explore Cartography is the definitive overview of today’s bravest, boldest creative cartography, featuring 360 colorful creations by well-known artists and emerging visual experimenteurs alike, including Brain Pickings favorites Maira Kalman, Paula Scher and Olaful Eliasson.

The Nature of Fun: David Foster Wallace on Why Writers Write by Maria Popova “Fiction becomes a weird way to countenance yourself and to tell the truth instead of being a way to escape yourself or present yourself in a way you figure you will be maximally likable.” On the heels of the highly anticipated new David Foster Wallace biography comes Both Flesh and Not: Essays (public library) — a collection spanning twenty years of Wallace’s nonfiction writing on subjects as wide-ranging as math, Borges, democracy, the U.S. Open, and the entire spectrum of human experience in between.