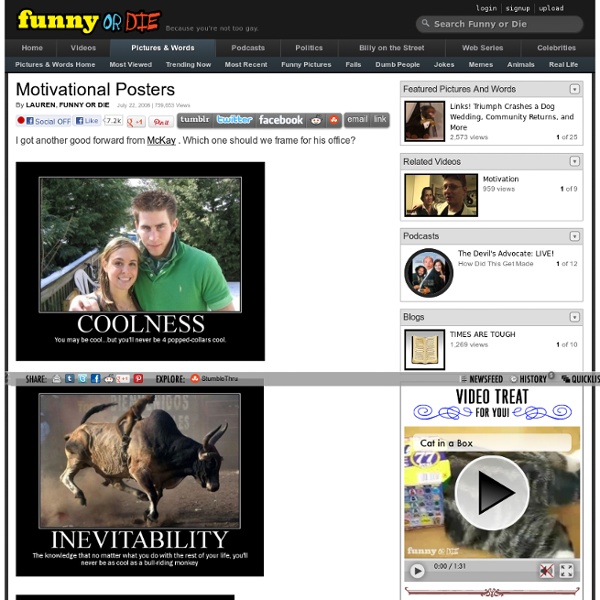 I got another good forward from McKay . Which one should we frame for his office?

Various quotations | #222 « From up North In From up North’s inspiration galleries we present the latest of our findings from the wonderful world of design. Amazing high quality artworks in various categories from great designers all over the globe. Quote by George Bernard Being happy… Sometimes I pretend to be normal… Top 10 Funny Pictures of June 2010 In June 2010 there were number of pictures posted on popular social media site like Reddit, Digg, Stumbleupon etc. From those huge collection of images we have selected the most funny pictures of June 2010, I hope you may like our selection. Let us know if you have any other picture that could be in this list, in comments below. There are few Gif files towards the end, and they may take a little while to load. He ruined this kid’s life Laziness The Controller You Wish You Were Playing With At E3 Yellow Card I fixed the iPhone 4 “holding” problem I have you Now Luckiest Day of His Life The best stunt of the century Now This Is A Great Roommate!

Strand Superyacht - Two for One (by @baekdal) #design I know what you are thinking. It is devilishly hard to decide whether you should get a new yacht, or just get another super car. Right? A yacht is relaxing, but the car is fun. Actually, there is. And it has a top speed of an phenomenal 50 knots. And, it comes with a built-in garage for the "Tender." If that is too small for you, they have also come up with the Strand Craft 166. It is 166 foot long, can retract the flybridge and radar mast for a more streamline style. There are five double en-suite staterooms, each equipped with 52 inch Bang & Olufsen TVs, top of the line sound systems, LED mood lighting and an iPad control and information center. And it is capable of a cruising speed of 30 knots with a top speed of 40 knots. So there you have it. Follow: 42Concepts

Egyptian Archaeologist Admits Pyramids Contain Alien Technology |Latest UFO News| UFO 2011 Sightings|Alien Pictures|2011 Solar Flares|Disclosure Project|Web Bot UFO Aliens may have helped build Pyramids of Giza says, Cairo university archeologist Head of the Cairo University Archaeology Department, Dr Ala Shaheen in December 2010 had told an audience that there might be truth to the theory that aliens helped the ancient Egyptians build the oldest of pyramids, the Pyramids of Giza. On being further questioned by Mr Marek Novak, a delegate from Poland as to whether the pyramid might still contain alien technology or even a UFO with its structure, Dr Shaheen, was vague and replied “I can not confirm or deny this, but there is something inside the pyramid that is “not of this world”. Delegates to the conference on ancient Egyptian architecture were left shocked, however Dr Shaheen had refused to comment further or elaborate on his UFO and alien related statements. Actually ancient Egyptian writings very often talk of beings from the sky, the sky opening and bright lights coming down to teach them technology and give them wisdom.

Mr. X by Carl Sagan by Carl Sagan It all began about ten years ago. I had reached a considerably more relaxed period in my life - a time when I had come to feel that there was more to living than science, a time of awakening of my social consciousness and amiability, a time when I was open to new experiences. I had become friendly with a group of people who occasionally smoked cannabis, irregularly, but with evident pleasure. Initially I was unwilling to partake, but the apparent euphoria that cannabis produced and the fact that there was no physiological addiction to the plant eventually persuaded me to try. I can remember another early visual experience with cannabis, in which I viewed a candle flame and discovered in the heart of the flame, standing with magnificent indifference, the black-hatted and -cloaked Spanish gentleman who appears on the label of the Sandeman sherry bottle. I want to explain that at no time did I think these things 'really' were out there.