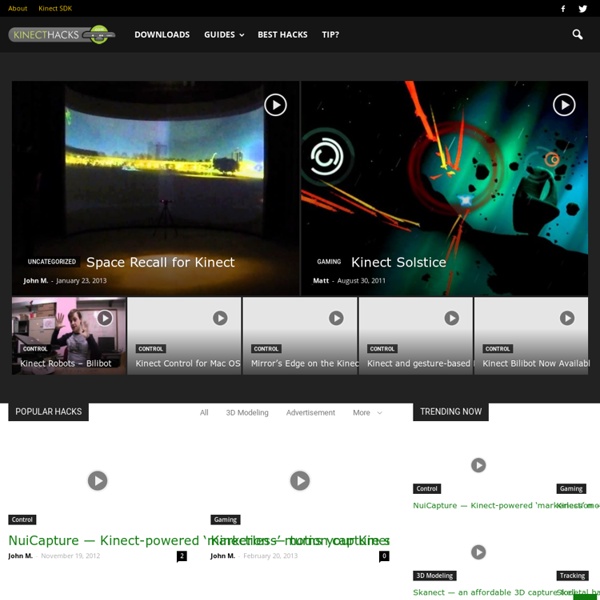 Top 10 Best Kinect Hacks Thanks to ever-growing Kinect Community, there are a lot of great Kinect programs/hacks out there and more come each day. The artists, developers and technology enthusiast who belong to the Kinect Community have presented and share their Kinect programs not only within the community, but also to the rest of the world. In honor of the community as well as the Kinect device, Kinecthacks.com has currently compiled its TOP 10 BEST KINECT HACKS. The team has gone through a lot of content it has featured in order to create this list of the best and most brilliant Kinect programs. The following programs have been selected for pushing the Kinect Technology, its unique creativity and its goal in improving daily routines and tasks. For its contributions to the community as well as its potential, these programs have made it on our Top 10 List. Without further ado, the Top 10 Best Kinect Hacks of Kinecthacks.com (Updated September 10, 2011) 10. 9. 8. 7. 6. 5. 4. 3. 2. 1.

Visual learning Visual thinking is a learning style where the learner better understands and retains information when ideas, words and concepts are associated with images. Research tells us that the majority of students in a regular classroom need to see information in order to learn it. Some common visual learning strategies include creating graphic organizers, diagramming, mind mapping, outlining and more. Visual learning helps students clarify their thoughts Students see how ideas are connected and realize how information can be grouped and organized. With visual learning, new concepts are more thoroughly and easily understood when they are linked to prior knowledge. Visual learning helps students organize and analyze information Students can use diagrams and plots to display large amounts of information in ways that are easy to understand and help reveal relationships and patterns. Visual thinking and learning utilize graphical ways of working with ideas and presenting information.

not_available I find my life is more fulfilling when I am working on at least one creative side project. Together these projects have taken me on a journey through numerous interesting cognitive landscapes and helped keep my mind fresh for other challenges. My art tends to make use of new technologies – I enjoy the feeling of discovering the first artistic possibilities of a new medium. Working on such projects also gives me the well-rounded feeling of pulling on a variety of skills from both the technical and artistic sides Here’s a sample of what I’ve done in the last couple of years: Depth-Sculpting Reality with the Kinect 3D camera The Kinect 3D camera (made by PrimeSense) captures the world in true 3D, acquiring distance information along with color in real time. Wood grain for artistic visualization This series of projects explores the use of wood grain as an artistic visualization tool. Specific designs with videos showing how the light dances over the surface as it’s moved: Custom car Ephemerisle:

MIT Uses XBox Kinect to Create Minority Report Interface Minority Report has come to life thanks to the Kinect and MIT. In the movie Minority Report, Tom Cruise uses an advanced user interface system that lets him control media files with nothing more than a gesture from his gloved hands. He could do the same now with little more than an XBox. A member of the research staff at MIT’s Computer Science and Artificial Intelligence Laboratory (CSAIL) has created a Minority Report interface using the Kinect 3D sensor and a bunch of open source software. Not only does the device only cost $150, you can use it without any dorky gloves. Garratt Gallagher, the interfaces’s creator, shows off some basic gesture controls in the video below. Did Microsoft understand what they were doing when they put a $150 3D motion tracker on the market? Compare Gallagher’s setup to the original system shown in the movie. And Gallagher did it all using open source software! [screen capture and video credit: MIT CSAIL] [source: MIT CSAIL]

Daniel Shiffman The Microsoft Kinect sensor is a peripheral device (designed for XBox and windows PCs) that functions much like a webcam. However, in addition to providing an RGB image, it also provides a depth map. Meaning for every pixel seen by the sensor, the Kinect measures distance from the sensor. This makes a variety of computer vision problems like background removal, blob detection, and more easy and fun! The Kinect sensor itself only measures color and depth. However, once that information is on your computer, lots more can be done like “skeleton” tracking (i.e. detecting a model of a person and tracking his/her movements). What hardware do I need? First you need a “stand-alone” kinect. Standalone Kinect Sensor v1. Some additional notes about different models: Kinect 1414: This is the original kinect and works with the library documented on this page in the Processing 3.0 beta series. SimpleOpenNI I’m ready to get started right now What is Processing? What if I don’t want to use Processing?

Generazioni connesse not_available LES CHEMINS DE L’INCONNAISSANCE Two Kinects Can Make A Model Of The World Around You @Bakamoichigei: If someone did this professionally, couldn't they simply code something to cut out a lot of that? Like, the table above...if it's clear there's a linear surface, could a program figure that out and when displaying it on screen reduce all that interference? @Luke Plunkett: The issue is this part right here: "if it's clear there's a linear surface." It may be clear to you and me, but it wouldn't be so clear to a computer. Although one could do this to an extent through on-the-fly detection algorithms, you are almost sure to either miss some elements that are linear or mark some non-linear objects as linear (probably both). So unfortunately, the simple fix gets complicated fast. The absolute best way I can think of to remove the interference would be to either polarize the IR from each Kinect or have each Kinect produce a slightly different wavelength in the IR spectrum. @Kenneth Blaney: If I'm not the only one with the polarizer idea, WHY ISN'T IT DONE YET?