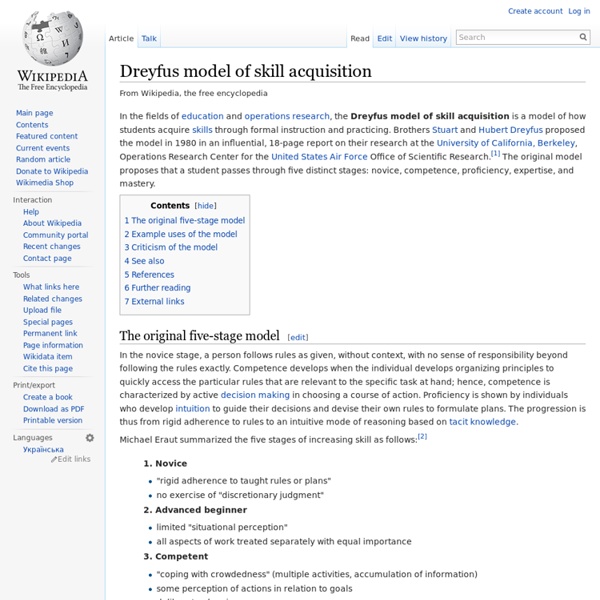 In the fields of education and operations research, the Dreyfus model of skill acquisition is a model of how students acquire skills through formal instruction and practicing. Brothers Stuart and Hubert Dreyfus proposed the model in 1980 in an influential, 18-page report on their research at the University of California, Berkeley, Operations Research Center for the United States Air Force Office of Scientific Research.[1] The original model proposes that a student passes through five distinct stages: novice, competence, proficiency, expertise, and mastery. The original five-stage model[edit] Michael Eraut summarized the five stages of increasing skill as follows:[2] Instead the original Dreyfus model is based on four binary qualities: Recollection (non-situational or situational)Recognition (decomposed or holistic)Decision (analytical or intuitive)Awareness (monitoring or absorbed) This leads to five roles: 1. Example uses of the model[edit] Criticism of the model[edit] See also[edit] Related:  Self Actualisation

Brainwave entrainment Brainwave Entrainment is any practice that aims to cause brainwave frequencies to fall into step with a periodic stimulus having a frequency corresponding to the intended brain-state (for example, to induce sleep), usually attempted with the use of specialized software. It purportedly depends upon a "frequency following" response on the assumption that the human brain has a tendency to change its dominant EEG frequency towards the frequency of a dominant external stimulus.[citation needed] Such a stimulus is often aural, as in the case of binaural or monaural beats and isochronic tones, or else visual, as with a dreamachine, a combination of the two with a mind machine, or even electromagnetic radiation. Hemispheric Synchronization, a potential and generally desired result of brainwave entrainment, refers to a state when the brainwave pattern of the right and left hemispheres become alike. History[edit] Aural entrainment[edit] Binaural beats[edit] Binaural beats Monaural beats[edit]

Learning styles Learning style is an individual's natural or habitual pattern of acquiring and processing information in learning situations. A core concept is that individuals differ in how they learn.[1] The idea of individualized learning styles originated in the 1970s, and has greatly influenced education.[2] Proponents of the use of learning styles in education recommend that teachers assess the learning styles of their students and adapt their classroom methods to best fit each student's learning style. David Kolb's model[edit] David A. David Kolb’s Experiential Learning Model (ELM) [5] 1. "Hands-on" and concertWants to doDiscovery methodSets objectives/schedulesAsks questions fearlesslyChallenges theoriesAdaptableReceive information from othersGut feeling rather than logic 2. "Hands-on" and theoryAnalogiesSpecific problemsTests hypothesisBest answerWorks aloneProblem solvingTechnical over interpersonal 3. 4. Learning Modalities[edit] 1. 2. 3. Descriptions of Learning Modalities: Other models[edit] 1.

A PRACTITIONER'S GUIDE TO HEDONISM The Greek philosopher Epicurus has been a victim of muck-raking and slander for more than two thousand years. Anthony Gottlieb sets the record straight, and resurrects some ancient advice on the good life ... From INTELLIGENT LIFE magazine, September 2007 WHERE IS is a hedonist to look for his heroes? Not to the religious traditions of the East, to be sure: they lack enthusiasm for the illusory pleasures of this world. None of the greatest Western philosophers has produced a paean to pleasure that can serve as much of a guide for today’s enlightened hedonist. Thus Kant preached a stern gospel of dutifulness, and Plato’s pleasures were unstintingly abstract and intellectual. But there is one Greek philosopher whose name has become synonymous with the life of pleasure--especially sensual pleasures, and above all those of a gourmet. Exactly what Epicurus got up to in the undergrowth will never be known.

Mind Hacks Digital Literacy + Digital Fluency Update 6/13/2012: We finally finished our book on this topic. It is available in print here, and in Kindle format here. You can also download a sample chapter here: here (601k PDF) Literacy and fluency* have to do with our ability to use a technology to achieve a desired outcome in a situation using the technologies that are available to us. ..and it applies to our ability to use digital technologies to have the intended positive effect on people and situations: Note that a literate person is perfectly capable of using the tools. *For the sake of simplicity, we have boiled all of this down to three levels of skill, and have given them what we think are easy-to-understand names. Related Posts:

WannaLearn.com Neuroskeptic How to Change the World Amazon start selling the paperback edition of my latest book, APE: Author, Publisher, Entrepreneur. APE explains how to publish a book by breaking the process down into three stages: Author explains how to write a book. Publisher explains how to produce both ebooks and printed books.Entrepreneur explains how to market and sell your book with an emphasis on social media. You can order APE here: There are 204 Amazon reviews for it: 181 five stars, 21 four stars, and 2 three stars which averages to five stars! Here are three of the blurbs: “Nuts, bolts, and inspiration too. Seth Godin, author and founder of The Icarus Project “Guy’s book is the perfect companion on the journey of independent publishing and great reading for the millions who aspire to become authors.” Atif Rafiq, General Manager, Kindle Direct Publishing at Amazon.com

Hacking Knowledge: 77 Ways to Learn Faster, Deeper, and Better If someone granted you one wish, what do you imagine you would want out of life that you haven’t gotten yet? For many people, it would be self-improvement and knowledge. Newcounter knowledge is the backbone of society’s progress. Great thinkers such as Leonardo da Vinci, Thomas Edison, Benjamin Franklin, Albert Einstein, and others’ quests for knowledge have led society to many of the marvels we enjoy today. Life-changing knowledge does typically require advanced learning techniques. Health Shake a leg. Balance Sleep on it. Perspective and Focus Change your focus, part 2. Recall Techniques Listen to music. Visual Aids Every picture tells a story. Verbal and Auditory Techniques Stimulate ideas. Kinesthetic Techniques Write, don’t type. Self-Motivation Techniques Give yourself credit. Supplemental Techniques Read as much as you can. For Teachers, Tutors, and Parents Be engaging. For Students and Self-Studiers Be engaged. Parting Advice Persist. Sources For This Article Did you enjoy this article?

100 Amazing How-To Sites to Teach Yourself Anything Posted by Site Administrator in Online Learning May 7th, 2009 Learning new skills and expanding your knowledge doesn’t have to cost you an arm and a leg. There are loads of free resources on the Web that can help you find instructional videos, tutorials and classes to learn a wide variety of skills from fixing basic car problems to speaking another language. With 100 sites to choose from, you’re bound to find something here that will help you learn just about anything you could want. General Tutorials These sites offer a wide range of tutorials and videos. Around the House Want to know how to fix that broken cabinet or hang up some great wallpaper? Business and Management If you feel like you’re seriously lacking on business and management skills at work, no need to worry. KnowThis? Language and Writing Those who want to learn a new language, improve their writing skills or just learn more about literature will be well-served by these instructional sites. Technology Math S.O.S. Science Creativity