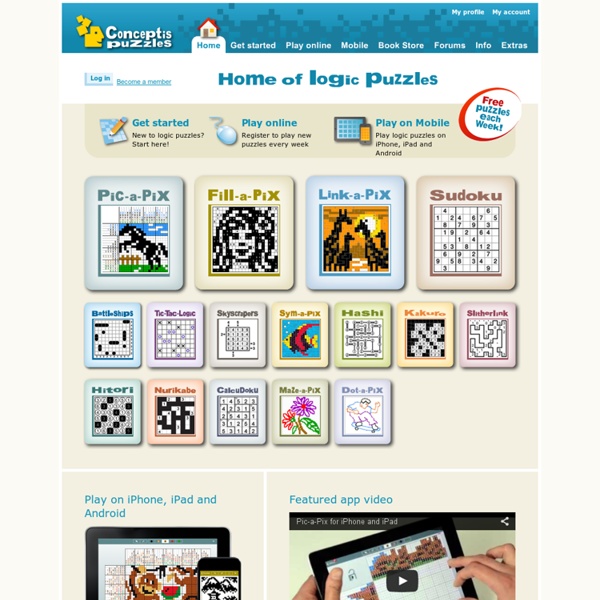 Cryptogram Assistant This is a JavaScript 1.2 implementation of a letter-pair replacement solver, also known as a substitution cipher. This is the kind of puzzle where A is N, B is O, C is P, etc. It can also be called a cryptoquip or a cryptogram in the local newspaper. To use it, you just define a "key" and the letters in the upper part will be translated and shown in the lower part. In a related vein, you can check out the ROT13 encoder which swaps letters from the first half of the alphabet with the second half (and vice versa), or the Caesar cipher where you essentialy "slide" the alphabet over to the left or right. Result: Keyed Caesar alphabet: ABCDEFGHIJKLMNOPQRSTUVWXYZ0123456789 Or a decode alphabet: ABCDEFGHIJKLMNOPQRSTUVWXYZ0123456789

Online Calcudoku Puzzles Jay is Games - Indie Games, Browser Games and Casual Game reviews, walkthroughs, room escape games, point and click games, puzzle games and more! Planarity.net The Sphinx The Sphinx engulfed by desert sands In the shadow of the Pyramids, on the edge of the Giza plateau, sits one of Egypt's most extraordinary monuments—the Great Sphinx. Carved out of the natural bedrock and enlarged with blocks of limestone, this enormous statue of a recumbent lion with a human head is the largest surviving sculpture from the ancient world. It is also the earliest colossal sculpture the Egyptians erected, so old that for much of history the Egyptian Pharaohs knew not from when it came, and themselves worshipped it as a God. It is generally accepted that the Sphinx was built by Pharaoh Khafre (c. 2575—2465 BC) during the Old Kingdom, the age of the great pyramid builders. There is speculation that the monument may be older than this, however, for an inscription within the Great Pyramid, dating from 600 BC, records that Pharaoh Khufu—Khafre's father—carried out repairs on the Sphinx's tail and headdress. What was the Sphinx? The original purpose of the Sphinx is unknown.