Brains Sweep Themselves Clean Of Toxins During Sleep 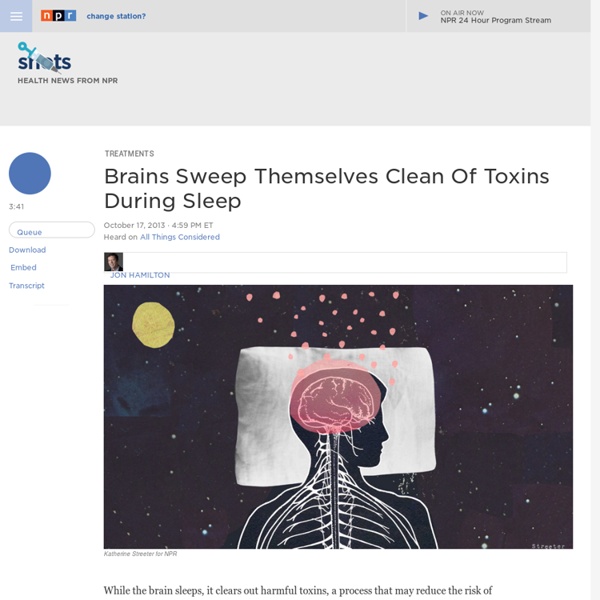 Katherine Streeter for NPR While the brain sleeps, it clears out harmful toxins, a process that may reduce the risk of Alzheimer's, researchers say. During sleep, the flow of cerebrospinal fluid in the brain increases dramatically, washing away harmful waste proteins that build up between brain cells during waking hours, a study of mice found. "It's like a dishwasher," says Dr. Maiken Nedergaard, a professor of neurosurgery at the University of Rochester and an author of the study in Science. The results appear to offer the best explanation yet of why animals and people need sleep. Nedergaard and a team of scientists discovered the cleaning process while studying the brains of sleeping mice. The scientists noticed that during sleep, the system that circulates cerebrospinal fluid through the brain and nervous system was "pumping fluid into the brain and removing fluid from the brain in a very rapid pace," Nedergaard says. So why doesn't the brain do this sort of housekeeping all the time?

Related:  Sleep and Dreams • Neuroplasticity • Learning how to Learn

How to Spend the Last 10 Minutes of Your Day How much sleep did you get last night? If the answer is “not enough” you’re hardly alone. According to Gallup’s estimates, almost half the people you’ll run into today are suffering from some level of sleep deprivation. We often dismiss a little morning fatigue as an inconvenience, but here’s the reality. ADHD in Adults: Understanding Why You Do What You Do What I have come to understand — something that people with ADHD know from an early age — is that, if you have an ADHD nervous system, you might as well have been born on a different planet. Most people with ADHD have always known they are different. They were told by parents, teachers, employers, spouses, and friends that they did not fit the common mold and that they had better shape up in a hurry if they wanted to make something of themselves.

The Pomodoro Technique® - Time Management Skills From MindTools.com Staying Focused Throughout the Day © iStockphotoCsondy After four "pomodori," you've earned yourself a good break! Do you find that your productivity fluctuates from one day to the next? Some days, you fly through your tasks in no time. Free software: 14 programs to keep you organized On Sunday, I reviewed the worthwhile book Getting Organized in the Google Era by Douglas C. Merrill, during which I mentioned that most of the productivity software I use for my work is free. A few people emailed me and asked about them, including this one (which made me smile) from Dot:

How to Break the Procrastination Habit New laws on marijuana were supposed to boost tax revenues and free up cops to go after “real” criminals. But underground sales—and arrests—are still thriving. It’s just after four o’clock on a hot Seattle afternoon, and Thomas Terry is standing in the parking lot of a Jack in the Box. Known for fights that end with police sirens and sometimes ambulances, it’s a spot some locals half-jokingly call “Stab in the Box,” but today the scene is quiet. A man is walking up the street toward Terry and a few other young men who are gathered in the shade of a brick wall where the parking lot meets the sidewalk. Brain Zaps Can Trigger Lucid Dreams Lucid dreams, in which people are aware of and can control their dreams, are rare. But now scientists have found they can induce this weird state of mind in people by zapping their brains with a specific frequency of electricity. "I never thought this would work," said study researcher Dr. John Allan Hobson, a psychiatrist and longtime sleep researcher at Harvard University. "But it looks like it does." The results showed that when the inexperienced dreamers were zapped with a current of 40 Hertz, 77 percent of the time these participants reported having what were described as lucid dreams.

A Minority President: Why the Polls Failed, And What the Majority Can Do « George Lakoff By George Lakoff The American Majority Hillary Clinton won the majority of votes in this year’s presidential election. Harvard Initiative for Learning and Teaching This blog entry is part of a series of topical Practice-Oriented Literature Overviews written by the HILT Research Fellows. by Michael C. Friedman Note-taking should be an obvious practice and an intuitive skill: pay attention in class, and scribble (or with the current generation of students, type) furiously as the instructor speaks and displays slides of information, right?

Pushup Bra for Men Turns Man Boobs into Power Pecs Good news for males who still enjoy tight-fitted t-shirts. A new “muscle-enhancing” top by U.K.-based Funkybod.com gives men who haven’t peaked in the pectorals a chance to fit in with all the other fist-pumping brawny folk. The padded undershirt effectively serves as the answer to a woman’s padded bra, acting as a “confidence booster” for men everywhere. The shirt, which costs about $48, is available in black, white and grey. Opinion: For a more productive life, daydream In 1990, a 25-year-old researcher for Amnesty International, stuck on a train stopped on the tracks between London and Manchester, stared out the window for hours. To those around her, no doubt rustling newspapers and magazines, busily rifling through work, the young woman no doubt appeared to be little more than a space cadet, wasting her time, zoning out. But that woman came to be known as JK Rowling. And in those idle hours daydreaming out the train window, she has said that the entire plot of the magical Harry Potter series simply "fell into" her head. Mark Twain, during an enormously productive summer of writing in 1874, spent entire days daydreaming in the shade of Quarry Farm in New York, letting his mind wander, thinking about everything and nothing at all, and, in the end, publishing "The Adventures of Tom Sawyer." Such creative breakthroughs in leisurely moments are hardly unique to literature.

Want to get ahead? Sleep in Smug early birds take note: Night owls actually have more mental stamina than those who awaken at the crack of dawn, according to new research. "It's the late risers who have the advantage, and can outperform the early birds," said Philippe Peigneux, a professor of clinical neuropsychology at the Free University of Brussels in Belgium, who along with co-author Christina Schmidt published the counterintuitive findings in the latest issue of the journal Science . Using magnetic resonance imaging, the pair conducted an experiment that measured alertness and ability to concentrate in 30 subjects who were naturally "extreme" early or late risers. The early risers got up between 5 a.m. and 6 a.m., and the late risers at noon. Maintaining their natural schedules, the volunteers spent two consecutive nights in sleep labs. After 10 hours of being awake, the early birds showed reduced activity in brain areas linked to attention span, compared with the night owls.

Exercise and Learning: How Physical Activity Boosts the Brain Slide 2 of 4 How the Brain Learns and Creates Memories As fundamental as the neurotransmitters are, there’s another class of master molecules that, over the past 15 years, has dramatically changed our understanding of connections in the brain. I’m talking about a family of proteins referred to as "factors," the most prominent of which is the brain-derived neurotrophic factor (BDNF). Whereas neurotransmitters carry out signaling, neurotrophins, such as BDNF, build and maintain the infrastructure itself. Once it became clear to researchers that BDNF was present in the hippocampus, the area of the brain related to memory and learning, they set out to test whether it was a necessary ingredient in the process.

Try, try again? Study says no: Trying harder makes it more difficult to learn some aspects of language, neuroscientists find When it comes to learning languages, adults and children have different strengths. Adults excel at absorbing the vocabulary needed to navigate a grocery store or order food in a restaurant, but children have an uncanny ability to pick up on subtle nuances of language that often elude adults. Within months of living in a foreign country, a young child may speak a second language like a native speaker. New Food Pyramid Illustrates Rise In Toxicity With Food Processing Share by MAE CHAN | Prevent Disease A food processing pyramid designed by Udo Erasmus perfectly illustrates how processed foods rise in toxicity and potential health dangers as we move from the bottom, based on raw foods, to the top of the pyramid based on hydrogenated, superheated toxic foods which promote disease. Approximately 70% of all calories in the western diet come from a combination of the following four foods: wheat, dairy, soy and corn – assuming, that is, we exclude calories from sugar. The problem is, they don’t do anything to advance our health. Were it true that these four foods were health promoting, whole-wheat-bread-munching, soy-milk-guzzling, cheese-nibbling, corn-chip having populations would probably be experiencing exemplary health among the world’s nations.