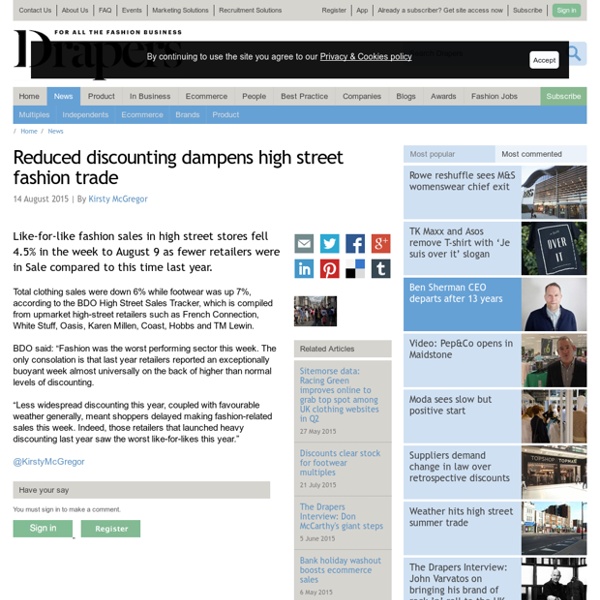 UK retail sales volumes dip in June - BBC News UK retail sales volumes fell unexpectedly by 0.2% in June, after consumers bought fewer household goods, and less food and petrol. The figures from the Office for National Statistics (ONS) also showed the annual rate of sales growth slowed to 4.0% last month from 4.7% in May. That was the slowest annual growth rate since September 2014, and was below analysts' forecasts. However, the ONS said the annual growth rate was still "strong". Sales volumes in the April-to-June quarter were up 0.7% from the previous quarter.

Global Recession Impacts on Fashion Industry: Strategies for Survival The whole world is facing global recession. The economy is slowing, the business environment is unpredictable and the consumers are getting increasingly diverse, informed, technologically strong and demanding. The global meltdown has, in no way, spared the fashion industry. This industry, along with other textile products industry, is also feeling the pinch of financial adversity. Chanel vs. Chanel: Coco's Brand Steps Off the Runway and Into the Courtroom Chanel is ubiquitous—on the runway each fashion week, in its boutiques lining Fifth Avenue and Rodeo Drive, and now in the courtroom as it seeks to uphold its trademark rights against a little-known salon and spa in Indiana. Merrillville, Indiana, to be precise. According to papers filed in the US District Court in Hammond, Indiana, Chanel Inc. has filed a trademark infringement action against Chanel’s Salon, arguing that the salon is benefiting from an association with the chi-chi brand’s reputation. The LVMH-owned brand also claims it has sent cease and desist letters that have been ignored. The fame of the Chanel trademark is hardly disputable, a factor weighing in the luxury brand’s favor.

London Fashion Week 2015: From catwalk to High Street 24 February 2015Last updated at 19:03 ET By Harriet Hall BBC News Inside London Fashion Week Twice a year, London's grand neoclassical Somerset House, welcomes a tumult of fashion designers and their models dressed in their finest gladrags. How Premium Fashion Brands Are Maximizing Their Social Media ROI Social media and digital technology have forever changed the retail industry. In 2011, brands and retailers have reached a tipping point, digital innovations have decentralized commerce, and real-time consumer demand for designer merchandise has forever changed retail production cycles. Many fashion brands, mocked for their inability to move with the web because of a fear of accessibility, are no longer fighting the flow. Through their embrace of social media and social commerce, fashion brands are now innovating and profiting from their online marketing strategies. Luxury and premium brands are starting to lead the way for all retailers looking to connect with their customers and build online revenue channels. Fashion Brands and Social Commerce

Apple Watch To Make Editorial Debut in Vogue China - BoF - The Business of Fashion BEIJING, China — Apple’s relationship with fashion has grown from a casual flirtation to a full-blown love affair. BoF can reveal that the Apple Watch is set to make its editorial debut on the cover of Vogue China’s November issue, out this Monday, featuring Liu Wen. A spread from Vogue China’s November issue | Source: Vogue China It’s the latest in a series of activities that puts fashion at the focus of Apple’s communication strategy. On September 9th, in the middle of New York Fashion Week, the Silicon Valley-based company invited a cadre of fashion editors and bloggers to the unveiling of the Apple Watch, held at its the headquarters in Cupertino, California.

Atmospheric Reentry millinery fashion collection by Maiko Takeda Hundreds of colourful bristles emanate from headdresses in Maiko Takeda's millinery collection, presented at the Royal College of Art fashion show earlier this week. The adornments consist of transparent plastic spikes tinted with colour gradients at the bases and tips, which are held in place between sections of acrylic joined by small silver rings. "While hats are commonly made with substantial and durable materials such as fabric, felt, plastic, leather so on, instead I wanted to create ethereal experiences for the wearer through the pieces," Takeda told Dezeen. "Through the experiment process, I developed the technique to create a visual effect of intangible aura by layering printed clear film, sandwiched with acrylic discs and linked together with silver jump rings." One head piece comprises two domes covered in orange and red spines that sit either side of the face with in thin gap in between, and another mask with orange and purple spines wraps around the head like a sea cucumber.

Christian Louboutin Lipstick Launch - Fall Beauty Trends When Christian Louboutin ventured into beauty, we weren’t shocked to see stiletto-like spikes atop bottles of shiny lacquer—the pièce de résistance being a blood-red polish the color of his legendary soles. Adding to the famed designer’s lineup of polishes—his Scarabée collection was one of our must-buy beauty picks for fall—are lipsticks intended to make a statement. “When a woman carries a handbag, we look at her shoulders. When she slips on a pair of heels, we observe her walk. If she applies lacquer to her nails, we admire her hands,” said Louboutin, in a release from the company. Louis Vuitton to Stage Instagram-Friendly ‘Series 3’ Exhibition in London LONDON, United Kingdom — From 21 September, a Brutalist former office block neighbouring London’s Somerset House will be enveloped in a fantastical confection of style, craft skills and technical spectacle, all part of a clever marketing display designed to evoke the creative soul and manufacturing nous of Louis Vuitton. In a break from the archive-based historical displays through which the French brand once reinforced its heritage, each season since the appointment of creative director Nicolas Ghesquière in 2014, Louis Vuitton has marked the arrival of its collections in retail stores with a nomadic exhibition. ‘Series 1’ for Autumn/Winter 2014 showed in Shanghai and Tokyo; ‘Series 2’ for Spring/Summer 2015 travelled between LA, Beijing, Seoul and Rome. ‘Series 3’ will launch in London during the city’s fashion week and based on figures from the previous editions, the exhibition is expected to attract some 100,000 visitors, according to the brand.