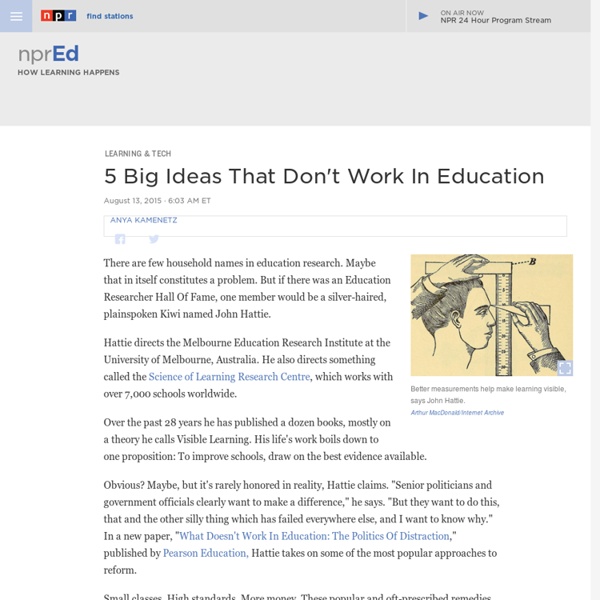 There are few household names in education research. Maybe that in itself constitutes a problem. But if there was an Education Researcher Hall Of Fame, one member would be a silver-haired, plainspoken Kiwi named John Hattie. Hattie directs the Melbourne Education Research Institute at the University of Melbourne, Australia. He also directs something called the Science of Learning Research Centre, which works with over 7,000 schools worldwide. Over the past 28 years he has published a dozen books, mostly on a theory he calls Visible Learning. Obvious? Small classes. Hattie doesn't run his own studies. Over the years, he has scrutinized — and ranked — 1,200 different meta-analyses looking at all types of interventions, ranging from increased parental involvement to ADHD medications to longer school days to performance pay for teachers, as well as other factors affecting education, like socioeconomic status. Technical Challenges Hattie's grand unified theory is simple — maybe too simple. 1. Related:  Language Learning Theory, Blogs, etc. • Is Digital Education the Answer • Hard to be a Good Teacher in an INept System

ESL EFL Teaching Activities Worksheets Lessons Games 10 Emerging Education Technologies Are you or your students wearing your Apple Watches to school, and if so, are you using them as part of your curriculum? What about the use of digital textbooks, adaptive learning, collaboration with other schools or flipped classrooms? These technologies represent some of the cutting edge tools and trends in education. While some are being implemented now, regular use of others is on the (not to distant) horizon. We’ve scanned the gurus’ lists and found the top technologies that educators need to prepare for in the next one to five years. Image via Flickr by Kārlis Dambrāns As we look at the top new trends in edtech, we notice some common themes: Individualism– much of the new technology is for one person and is customized to that person’s preferences, to be used when convenient. 1. 2. 3. Shared information—collaboration is key, whether it is with increased reliance on social media and an opportunity for more openness. 4. 5. 6. 8. 9. 10. These are exciting times for edtech.

After a parent screamed at her, this first-grade teacher called the police What should educators do when they are unfairly penalized for something they said? This is what has happened to Rafe Esquith, a nationally celebrated Los Angeles fifth-grade teacher. He is still banned from his classroom because he told a joke in class that few people would consider the least bit offensive. Teachers are threatened with administrative punishments far more often than we know. They often react as we would if our bosses came after us. They are frightened, confused and ready to take the easiest way out. Jay Mathews is an education columnist and blogger for the Washington Post, his employer for 40 years. What happens if they reject those instincts and instead get tough? [L.A. district continues to persecute one of the nation’s best teachers] Linda Johnson, a retired California teacher who frequently contributes to the washingtonpost.com comments page for this column, told me what happened when she decided not to bow her head and take unfair criticism from her supervisors.

What happens in the brain when you learn a language? Learning a foreign language can increase the size of your brain. This is what Swedish scientists discovered when they used brain scans to monitor what happens when someone learns a second language. The study is part of a growing body of research using brain imaging technologies to better understand the cognitive benefits of language learning. Tools like magnetic resonance imaging (MRI) and electrophysiology, among others, can now tell us not only whether we need knee surgery or have irregularities with our heartbeat, but reveal what is happening in our brains when we hear, understand and produce second languages. The Swedish MRI study showed that learning a foreign language has a visible effect on the brain. In other words, the areas of the brain that grew were linked to how easy the learners found languages, and brain development varied according to performance. Looking at functional MRI brain scans can also tell us what parts of the brain are active during a specific learning task.

Coding Camp for Minority Boys Where Mentors Make a Big Difference On the second floor of Morgan State University’s engineering building, Jacob Walker, 12, is putting the finishing touches on a ruler he’s just created. Not yet an actual ruler. One he’s designing on the computer. He just needs to add his initials — then it’s time to produce it on a 3-D printer. Jacob starts seventh grade in the fall and has big dreams. “When I was a child,” he says, “I loved to play with Legos, and it inspired me to be an engineer when I get older.” Jacob is one of some 50 boys in this free, four-week camp at Morgan State. Students learn to code, design apps, create products — even build a business plan. “We knew that they had these types of capabilities,” says LaDawn Partlow, a lecturer at Morgan State, who oversees the program. To find students, Partlow and her team reached out to local middle-school principals and counselors with this simple request: They aren’t now. “Why not start with the middle schools,” she says. Copyright 2015 NPR.

L.A. district continues to persecute one of the nation’s best teachers In this 2003 file photo, Rafe Esquith, a fifth-grade teacher at Hobart Elementary School in Los Angeles, leads an innovative after-school group in his classroom. (Jonathan Alcorn/For The Washington Post) Fifth-grade teacher Rafe Esquith’s worst nightmare began March 19, during a puzzling meeting in his principal’s office. That was wrong. Fortunately, his attorneys have prepared a detailed account of the administrative incompetence and wrong-headedness that created this situation as Los Angeles Unified School District investigators continue to search for anything they can use against their most-celebrated teacher. At that March meeting, according to their account, the principal told Esquith: “You have nothing to worry about. Three weeks later, Esquith learned that the district had forwarded a complaint to the California Commission on Teacher Credentialing, but the teacher still didn’t have details. Esquith was told that the district was pressuring him for an apology.

People remember 10%, 20%...Oh Really? Publication Note This article was originally published on the Work-Learning Research website (www.work-learning.com) in 2002. It may have had some minor changes since then. Updated Research Even after more than a decade, this blog post still provides valuable information explaining the issues -- and the ramifications for learning. Introduction People do NOT remember 10% of what they read, 20% of what they see, 30% of what they hear, etc. My Search For Knowledge My investigation of this issue began when I came across the following graph: The Graph is a Fraud! After reading the cited article several times and not seeing the graph---nor the numbers on the graph---I got suspicious and got in touch with the first author of the cited study, Dr. "I don't recognize this graph at all. What makes this particularly disturbing is that this graph has popped up all over our industry, and many instructional-design decisions have been based on the information contained in the graph. Who Should We Blame?

Schools as Punishing Factories: The Handcuffing of Public Education By Henry A. Giroux, Truthout This piece first appeared at Truthout. The Nobel Prize-winning author Ngugi wa Thiong’o has insisted rightfully that “Children are the future of any society,” adding, “If you want to maim the future of any society, you simply maim the children.” As we move into the second Gilded Age, young people are viewed more as a threat than as a social investment. If one important measure of a democracy is how a society treats its children - especially children of color, poor and working-class youth, and those with disabilities - there can be little doubt that the United States is failing. To read more articles by Henry A. The National Center on Family Homelessness reports that “One in 45 children experience homelessness in America each year. Teachable Moment or Criminal Offense? Every age has its approach to identifying and handling problems. Children are being punished instead of educated in US schools. If you have trouble leaving a comment, review this help page.

7 Ways to Memorize a Language and Understand It Posted on 08. Oct, 2014 by meaghan in Language Learning We published a SlideShare earlier this month discussing “8 Mistakes that Haunt Language Learners”. One of these mistakes is worth a deeper look—the concept of memorizing what needs to be understood. It’s a big problem for anyone who wants to learn a language quickly, but more importantly sustain it over time and use it fluidly. So what, exactly, is the problem with memorizing versus understanding? Image by Deb Stgo on Flickr.com Learning a language presents a similar struggle. Memorize what needs to be memorized. Look for patterns. Use mnemonics and tricks. Engage your senses. Image by Jeffrey Anderson on Wikimedia Commons Explain the concept to someone else. Be interested. Review often. So, there you have it. Share this Post! About meaghan Meaghan is the Social Media Coordinator for Transparent Language, aka the messenger of language news to twitterverse.

Related:
Related:  Language Learning Theory, Blogs, etc.   -  Is Digital Education the Answer   -  Hard to be a Good Teacher in an INept System