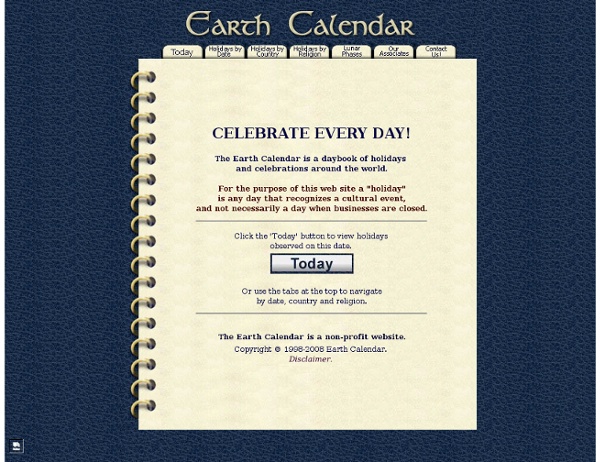 WorldTimeZone - Current time around the World and standard world time zones map of the world- 12 format Calendar Converter Welcome to Fourmilab's calendar converter! This page allows you to interconvert dates in a variety of calendars, both civil and computer-related. All calculations are done in JavaScript executed in your own browser; complete source code is embedded in or linked to this page, and you're free to download these files to your own computer and use them even when not connected to the Internet. To use the page, your browser must support JavaScript and you must not have disabled execution of that language. If the box above says “Your browser supports JavaScript”, you're in business; simply enter a date in any of the boxes below and press the “Calculate” button to show that date in all of the other calendars. Gregorian Calendar The Gregorian calendar is a minor correction to the Julian. While one can't properly speak of “Gregorian dates” prior to the adoption of the calendar in 1582, the calendar can be extrapolated to prior dates. Julian Day Julian Calendar Hebrew Calendar Islamic Calendar P.

The Official Kwanzaa Web Site Kwanzaa: Roots and Branches The Continental African Roots Kwanzaa is an African American and Pan-African holiday which celebrates family, community and culture. Celebrated from 26 December thru 1 January, its origins are in the first harvest celebrations of Africa from which it takes its name. The name Kwanzaa is derived from the phrase "matunda ya kwanza" which means "first fruits" in Swahili, a Pan-African language which is the most widely spoken African language. The first-fruits celebrations are recorded in African history as far back as ancient Egypt and Nubia and appear in ancient and modern times in other classical African civilizations such as Ashantiland and Yorubaland. The African American Branch Rooted in this ancient history and culture, Kwanzaa develops as a flourishing branch of the African American life and struggle as a recreated and expanded ancient tradition. Reaffirming and Restoring Culture Kwanzaa was created in 1966 by Dr.

World Time Server: current local time and date in any zone Winter Solstice by Ann-Marie Imbornoni In astronomy, the solstice is either of the two times a year when the Sun is at its greatest distance from the celestial equator, the great circle on the celestial sphere that is on the same plane as the earth's equator. In the Northern Hemisphere, the winter solstice occurs either December 21 or 22, when the sun shines directly over the tropic of Capricorn; the summer solstice occurs either June 20 or 21, when the sun shines directly over the tropic of Cancer. Reason for the Seasons The reason for the different seasons at opposite times of the year in the two hemispheres is that while the earth rotates about the sun, it also spins on its axis, which is tilted some 23.5 degrees towards the plane of its rotation. Longest Night of the Year The winter solstice marks the shortest day and the longest night of the year. Information Please® Database, © 2007 Pearson Education, Inc.

Online Conversion - Convert just about anything to anything else fra.timegenie FUSEAU HORAIRE & DECALAGE HORAIRE GMT: Greenwich Mean Time - World Time / Time in every Time Zone sans titre Horloge mondiale, heures et fuseaux horaires | The Time Now ::: Home Visas ::: Hospitals Around The World by Region - Expatriates Search Guide to Hospitals & Health Care by Geographical Location by phalinn on Flickr One of the biggest considerations for expats when choosing where to move and live abroad is their access to healthcare. In many parts of the world, quality medical care is available at a fraction of the price that it would cost in places like the United States. Medical procedures are often the driving force behind vacation destinations as well, a practice known a “medical tourism”. In particular, retirees are flocking to places like Central America where they will be fully covered by governmental healthcare once they achieve residency status. Legislation within these countries is now starting to cater to this particular demographic by creating programs that make residency and access into the country easier than ever. However, government healthcare might not be a completely viable option for those that plan on traveling frequently, or spending their winters in their second home while living the rest of the year in their country of origin.