Jessica Lahey’s ‘The Gift of Failure’: A Fear of Risk-Taking Has Destroyed Kids’ Love of Learning 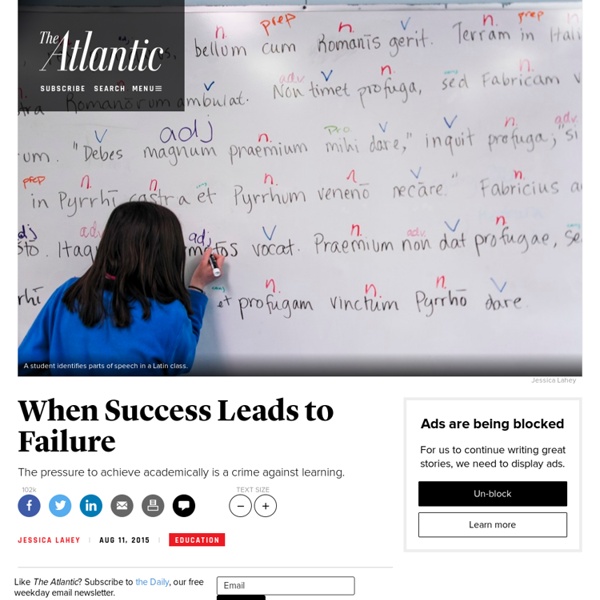 I’ve known the mother sitting in front of me at this parent-teacher conference for years, and we have been through a lot together. I have taught three of her children, and I like to think we’ve even become friends during our time together. She’s a conscientious mother who obviously loves her children with all of her heart. “Marianna’s grades are fine; I’m not worried about that, but she just doesn’t seem to love learning anymore.” She’s absolutely right. The truth—for this parent and so many others—is this: Her child has sacrificed her natural curiosity and love of learning at the altar of achievement, and it’s our fault. I look at this mother with concern on her face, her eager pencil poised to write down my words of wisdom. This mother’s hovering comes from a place of love—that’s clear. Marianna is very smart and high-achieving, and her mother reminds her of that on a daily basis. I know this mom because she’s just like me. Related:  Voices for Justice

Frances Kelsey, FDA Officer Who Blocked Thalidomide, Dies At 101 Dr. Frances O. Kelsey of the U.S. FDA, who is credited with keeping the birth-deforming drug, Thalidomide, off the U.S. market, is shown in an Aug. 1962 photo. Kelsey died on Friday at age 101. toggle caption AP Dr. Dr. In 1960, Kelsey was the new medical officer at the Food and Drug Administration when an application for FDA approval of the sedative Kevadon, the trade name of thalidomide, manufactured by drug company William S. Thalidomide had already been sold to pregnant women in Europe and elsewhere as an anti-nausea drug to treat morning sickness, and Merrell wanted a license to do the same in the U.S. As The New York Times reports, Kelsey asked for more information. "Thus began a fateful test of wills. As The Washington Post adds, "[the] tragedy was largely averted in the United States, with much credit due to Kelsey. ... Kelsey, a physician and pharmacologist, died on Aug. 7.

Supermarket food waste 'must be banned by EU and US', demands French politician Arash Derambarsh | Europe The politician who spearheaded the successful campaign to ban French supermarkets from throwing away unsold food has demanded the EU and the United States follow suit. Arash Derambarsh, a municipal councillor for the commune of Courbevoie in Paris, believes only legislation can prevent such food waste by large supermarkets. He told The Independent: "The problem is simple we have food going to waste and poor people who are going hungry." Now the law has passed unanimously through the French Senate, Mr Derambarsh is calling EU President Jean-Claude Juncker and President Obama to effect similar legislation. "The only goal of supermarkets is to make money, I respect them as they employ a lot people and help the economy," he said. "However, today we got a lot of poor people - we have to change." Prior to the implementation of this law, French supermarkets received tax returns on all unsold food they threw away. Arash Derambarsh "I'm elected, my only interest is the general interest."

This Marine Wants To Tell The Stories Of America's Veterans. But He Needs Your Help. How to Fight Big Medical Bills Health After heart surgery, a couple gets a $30,000 cardiologist’s invoice. Can others avoid the same fate? Please consider disabling it for our site, or supporting our work in one of these ways Subscribe Now > When Susan Rosalsky was hired as an English instructor at SUNY Orange last year, she was elated. “I thought we were out of [hot] water,” she said. And they were—until this past March. Trost and Rosalsky live in Dingmans Ferry, on the easternmost edge of Pennsylvania. Bon Secours admitted Trost, and, after performing an echocardiogram, deduced that he had a failed mitral valve and would require surgery. On April 1, Trost’s heart was operated on by Arthur Ng, a cardiac surgeon with an independent surgery group based in Hackensack, New Jersey. Within weeks, the couple began receiving the types of bills you’d expect from this type of experience: A few hundred for a hospitalist, a few hundred more for a urologist. But the biggest bill was eye-popping: $32,845 for Ng’s services.

Ohrdruf, also called Ohrdruf-Nord, a sub-camp of the Buchenwald Concentration Camp Ohrdruf sub-camp of Buchenwald Colonel Hayden Sears poses with Ohrdruf survivors, April 8, 1945 On April 4, 1945, American soldiers of the 4th Armored Division of General Patton's US Third Army were moving through the area south of the city of Gotha in search of a secret Nazi communications center when they unexpectedly came across the ghastly scene of the abandoned Ohrdruf forced labor camp. A few soldiers in the 354th Infantry Regiment of the 89th Infantry Division of the US Third Army reached the abandoned camp that same day, after being alerted by prisoners who had escaped from the march out of the camp, which had started on April 2nd. Prior to that, in September 1944, US troops had witnessed their first concentration camp: the abandoned Natzweiler camp in Alsace, which was then a part of the Greater German Reich, but is now in France. One of the American liberators who saw the Ohrdruf camp on April 4, 1945 was Bruce Nickols. Dead prisoners at Ohrdruf forced labor camp A. Gen. Home

Tell the Copyright Office: Copyright Law Shouldn't Punish Research and Repair After eighteen years, we may finally see real reform to the Digital Millennium Copyright Act’s unconstitutional pro-DRM provisions. But we need your help. In enacting the “anti-circumvention” provisions of the DMCA, Congress ostensibly intended to stop copyright “pirates” from defeating DRM and other content access or copy restrictions on copyrighted works and to ban the “black box” devices intended for that purpose. In practice, the DMCA anti-circumvention provisions haven’t had much impact on unauthorized sharing of copyrighted content. Instead, they’ve hampered lawful creativity, innovation, competition, security, and privacy. In the past few years, there’s been a growing movement to reform the law. It seems the Copyright Office has heard those concerns. On the one hand, any such recommendation may be too little and too late. On the other hand, this is progress. But that progress won’t be meaningful if the permanent exemptions aren’t truly useful.

Amy Goodman Is Facing Prison for Reporting on the Dakota Access Pipeline. That Should Scare Us All. This Monday afternoon, as the sun hits its peak over Mandan, North Dakota, the award-winning journalist, and host of Democracy Now!, Amy Goodman will walk into the Morton County–Mandan Combined Law Enforcement and Corrections Center and turn herself in to the local authorities. Her crime: good, unflinching journalism. Goodman had the audacity to commit this journalism on September 3, when she was in North Dakota covering what she calls “the standoff at Standing Rock”: the months-long protests by thousands of Native Americans against the Dakota Access Pipeline. The $3.8 billion oil pipeline is slated to carry barrel after barrel of Bakken crude through sacred sites and burial grounds of the Standing Rock Sioux tribe, and tribe members fear it could pollute the Missouri River, the source not only of their water but of millions of others’, should the pipe ever rupture. Goodman’s arrival at the main protest site, the Sacred Stone Spirit Camp, was significant. Goodman was right, of course.