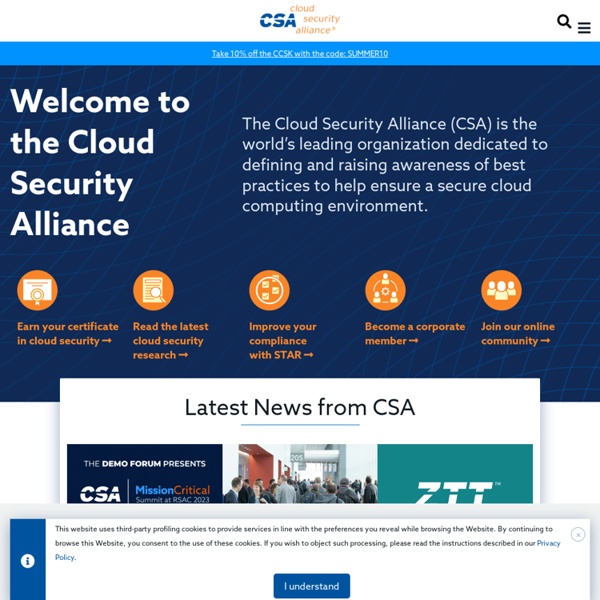 April 02, 2014 Cloud Security Alliance (CSA) Announces SAP Has Joined CSA as an Executive Corporate Member SAP will participate in key research with the CSA on Horizon 2020 – the EU framework programme for research and innovation. April 01, 2014 SIT Partners The Cloud Security Alliance In Landmark Agreement SIT students will have the opportunity to participate in CSA events in Asia Pacific, and will be given priority placements to work with CSA during the course of their studies.

William Vambenepe — IT automation: the seven roads to management middleware You can call it a “Cloud operating system”, an “adaptive infrastructure framework” or simply “IT management middleware” (my vote) as you prefer. It’s the software that underpins the automation engine of your Cloud. You can’t have a Cloud without an automation engine, unless you live in a country where IT admins run really fast, never push the wrong button, never plug a cable in the wrong port, can interpret blinking lights at a rate of 9,600 bauds and are very cheap. The automation engine is what technically makes a Cloud.

Top five cloud computing security issues In the last few years, cloud computing has grown from being a promising business concept to one of the fastest growing segments of the IT industry. Now, recession-hit companies are increasingly realising that simply by tapping into the cloud they can gain fast access to best-of-breed business applications or drastically boost their infrastructure resources, all at negligible cost. But as more and more information on individuals and companies is placed in the cloud, concerns are beginning to grow about just how safe an environment it is. Every breached security system was once thought infallible SaaS (software as a service) and PaaS (platform as a service) providers all trumpet the robustness of their systems, often claiming that security in the cloud is tighter than in most enterprises. But the simple fact is that every security system that has ever been breached was once thought infallible.

How to: Provision a File Published: May 2010 The following examples show how to provision files into various locations inside of Microsoft SharePoint Foundation. Each example uses the same project created in SharePoint development tools in Microsoft Visual Studio 2010.

Cloud Computing Has Become a Dominant Force in Financial Services Cloud computing is emerging as a dominant force in the financial services industry, and investment banks, brokers, market makers and asset managers all will look to push more sophisticated applications into the private cloud, according to Options IT CEO Nigel Kneafsey. In the span of a few short years, cloud computing has gone from being an enigmatic and somewhat exotic technology management model to a dominant force that is changing how business heads relate to and value the underlying technology that supports business growth. In the financial markets in particular, the implications of cloud computing on the business, however, have been neither clearly defined by the service provider nor clearly understood by the average consumer. Admittedly, early descriptions and definitions of cloud computing often relied on metaphors and analogies rather than concrete terms and value propositions.

Bas Vodde on Large Scale Scrum 2. So are you excited about the book that you have written? Tell me why. Absolutely. There is not very much written on large scale Scrum, or large scale development and most of the things that have been written are limited to only a couple of projects or products or companies, because one of the challenges with large scale development is that large projects or large product development is slow and they adopt things slower and large companies tend to be slower so the effort is hard to get experience from multiple products and especially from multiple companies.

The (Cloud) Tipping Point Trusted financial services vendors are grabbing the cloud market away from the Amazons and Googles of the cloud world. While consumers have been quick to move to cloud-based services and technology, the financial industry, collectively, has been one of the slower adopters. Until now. Solutions for Management: Service Management Functions: Configuration Management Published: April 25, 2008 | Updated: July 12, 2012 Launch the download of the MOF 4.0 core documentation in its entirety. Launch the download of Getting Started with MOF 4.0: An Implementation Guide. View the entire list of MOF supporting content available for download. Updated! Google persuades Spanish bank BBVA to use the cloud 11 January 2012Last updated at 06:12 By Tim Weber Business editor, BBC News website BBVA will keep Google applications separate from customer data

SharePoint 2007 Review - Six Pillars of MOSS Microsoft's Office SharePoint Server 2007, or “MOSS” for short, is Microsoft's first integrated server platform that aims to provide web content management, enterprise content services, and enterprise search, as well as shared business processes and business intelligence dashboarding to the small/medium enterprise. Like its predecessor SharePoint Portal Server (SPS) 2003/WSS 2.0, MOSS is fundamentally dedicated to unstructured document storage, structured list storage, and group collaboration. The word “share” has not been removed from the mission concept, which goes something like “connecting people, processes, and information.” This is SharePoint's raison d'etre. That has not changed. What has evolved are several new core capabilities.

NYSE Technologies Launches Capital Markets Cloud Community Platform The technology arm of NYSE Euronext partnered with EMC and VMware to build the cloud platform, dubbed the Capital Markets Community Platform. Related Photo Gallery: Inside NYSE's New Data Center It's no secret that capital markets firms have slow to adopt public cloud technology offerings because of concerns over reliability, security of data and potential headaches from strict industry regulators. vRanger Pro – Industry-standard Virtual Machine Backup and Recovery Safeguard your most business-critical data and applications in virtual and hybrid environments. The Dell Software portfolio of data protection products allows you to quickly capitalize on the cost-efficiency and scalability benefits of virtualization, while working within existing, hybrid environments. Our solutions reach across physical, virtual and cloud environments, providing stability now and in the future. Proven and scalable, these solutions serve as the backbone of data protection for tens of thousands of businesses worldwide, providing you with confidence that your backup and recovery strategy is stable and prepares you for the future.

Creating a Solution Published: May 2010 This topic provides some background information about solution packages in Microsoft SharePoint Foundation and how to manually create them. A solution package is a cabinet file that has a .wsp file name extension. &gt; Content + Context = Collaboration The Principals of C3 have been having a bit of a debate as to whether Microsoft Office SharePoint Server (MOSS) 2007 can be considered a true ECM system. Obviously Microsoft thinks it is as they’ve branded the tool as such. But others like Gartner disagree, calling it Basic Content Services rather than a full-blown ECM tool. So who’s right? There’s a school of thought that says while MOSS is a huge step forward from SharePoint 2003, it still has too many shortcomings to be considered a true ECM suite. These include a lack of vertical applications for things like SOX compliance and CAD drawing management (for now, anyway), no ability to send a persistent link to an object, no end user-accessible audit trail, and the fact that the default RM functionality is to copy a document to the records center while leaving the original file behind.

The role of MOSS in an large scale ECM environment (Part 1) « Agile In this series- Part one- Part two IntroductionOne of my clients asked me whether MOSS can be considered a ‘true’ ECM application. That certainly raised an eyebrow. Well, sure it supports ECM functionality like record management, document management IRM and sorts but does that make MOSS an enterprise ready ‘true’ ECM system? The couple of weeks after I have been discussing the matter with ECM and fellow Sharepoint consultants.