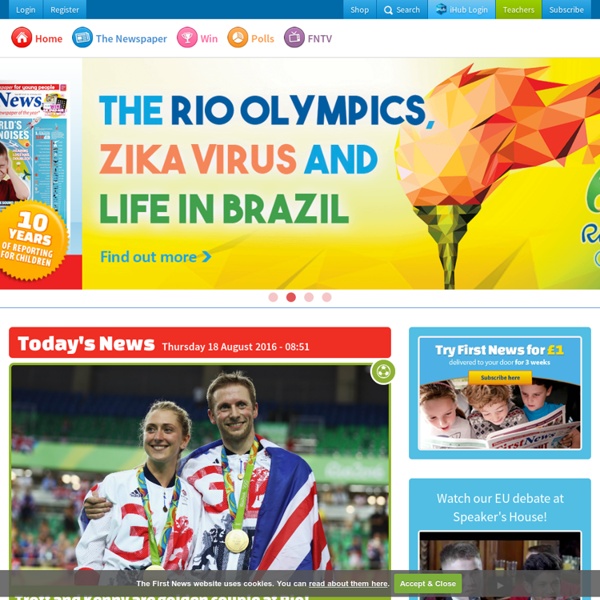 Twenty-Five Great Ideas for Teaching Current Events Looking for ways to work news into your classroom curriculum? Check out these great ideas for connecting current events to all subjects. Education World is pleased to offer 25 activities -- activities intended to help teachers make use of newspapers and to help students make sense of the news. Also included, at the end of the activity list, is a list of additional activities and Internet resources. This first activity won't make better or more interested news readers of your students -- but it was too interesting not to include in our list! Taken from an ERIC document, Twenty Ideas for Teaching Science Using the Newspaper, the first activity provides a recipe for keeping old newspaper clippings from turning yellow.

School Report - Lesson 4: Broadcasting news This lesson explains how to group stories into bulletins and the art of presentation. It also introduces the art of headline writing. Video: Broadcasting News - Huw Edwards BBC newsreader Huw Edwards explains what's involved in broadcasting the news. Whether it's standing in front of the camera, talking into the mic or publishing a written story on the web, broadcasting is when you tell everyone your story. You can recap the key points from video with this accompanying worksheet, or read a transcript of the video:

Spotlight: Rocks and Minerals If you look at pictures of Earth from space, you can see what a rocky planet we live on. The continents are vast shields of stone, with mountains covering one-fifth of the land area. The oceans are dotted with islands—and the dark seas conceal rocky bottoms. There are only four terrestrial (rocky) planets in our solar system: Mercury, Venus, Earth, and Mars. (The other four—Jupiter, Saturn, Uranus, and Neptune—are not solid, but made mostly of gas.) On Earth, the surface is often covered with signs of life—forests, grasslands, oceans, and lakes—but on the other terrestrial planets and the Moon, the rocky terrain is visible everywhere.

Inanimate Alice - About the Project Born-digital Created as a reading-from-the-screen experience for the digital generation, Inanimate Alice stands alongside the best novels for pre-teen and emerging teen readers. Interactive Requires the reader to drive the action forward at their own pace and encourages readers to co-create their own versions of the story, either filling in the gaps or developing new strands. Multimedia ABC3 - News - ABC3 Kids Wellbeing 5,000 kids are surveyed about their every day lives. Syria Ceasefire The US and Russia have negotiated a ceasefire. New Spaceship Virgin Galactic has unveiled it's new spaceship, the VSS Unity. Fiji Storm One of the biggest storms in the southern hemisphere. First Fleet: 04/02/2014, Behind the News Recently we celebrated Australia day on the 26th of January. But why do we mark it on that day in particular? To answer that question, Sarah will take you back in time to 1788, to meet some kids who came to Australia on the First Fleet. Kid 1: “My name is John Hudson and I'm nine years old. I've been an orphan ever since I can remember and I made a living sweeping chimneys. It was horrible work, dangerous too.

WHAT’S GOING ON IN THIS PICTURE - The Learning Network Blog Photo Students 1. After looking closely at the image above (or at the full-size image), think about these three questions: 5 Good Places for Kids to Learn About the News When I was a student in Mrs. Simmons's second grade classroom one of the things that I looked forward to every week was the arrival of the Scholastic Weekly Reader . I loved read the stories about news from other parts of the world (I guess I was destined to become a social studies teacher). Today, students don't have to wait for the Scholastic Weekly Reader to appear in their teacher's mailbox. Here are five student-friendly news sites to use in your current events lesson plans. Go Go News is a news website designed for elementary school students.

ESL English Listening & Adult Literacy - News - Audiobooks - Songs - Radio Dramas Laurie by Stephen King Part One (25 min. at normal speed - Various speeds available) Part Two (28 min. at normal speed - Various speeds available) Laurie is a beautiful and heartwarming story. It is a story about hope and life in general. This story introduces us to Lloyd, a man who recently lost his wife. One day, her sister visits Lloyd in Florida and gives him an unexpected gift - a mixed breed puppy named Laurie.

ESL News New ZealandGrammy Awards » ESL News New Zealand You probably already know that Lorde won two Grammy awards yesterday. She had been nominated for four awards and won two. She won the Best Pop Solo Performance. She and her co-song-writer Joel Little, won the Song of the Year for the song Royals. She performed this song earlier in the ceremony, dressed in a white shirt with black trousers. People noticed that her finger nails were coloured in black dye which is rather unusual.

multiple uses of newspapers & magazines for ELT Newspaper fire orange (Photo credit: NS Newsflash) I love using real things for teaching English. By “real things” I mean something from real life – and not something specially developed for learning or teaching. That’s why I prefer usual movies (and not educational ones – they are hardly very exiting, most of the times, usual radio and not “special English” stations, and usual newspapers (not the ones for ESL learners).