How to speak Australian : Abbreviate Everything 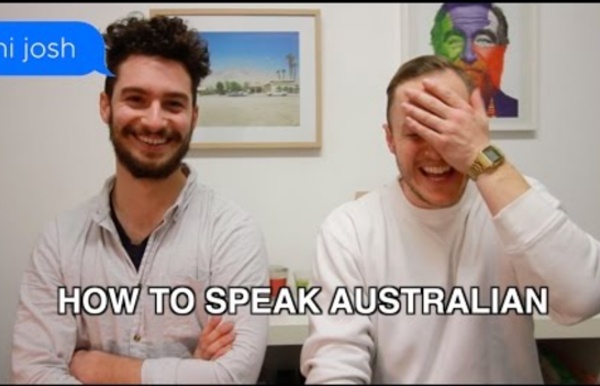 Australia: Fears Over New 'Stolen Generation' By Jonathan Samuels, Australia Correspondent Campaigners are asking for the law to be changed to help rescue thousands of Aboriginal children in Australia from extreme neglect. Alcohol abuse is rife amongst indigenous communities and children are being abandoned while their parents drink. In some rural areas it is common to see toddlers in nappies wandering around unsupervised, even begging for food or warm clothing. Many non-indigenous families are so concerned that they have been taking children off the streets and into their homes without formal permission. They want the law changed to make it easier for white Australians to foster or adopt Aboriginal children. Eight-year-old Cebby, who was born to an alcoholic mother, has been surrounded by alcohol abuse and violence throughout his young life. He told Sky News about the few simple things he thinks adults should provide. "I want them to make me feel safe. The community of Tennant Creek is seeing hundreds of abandoned children

Australia Travel Cheat Sheet; Sign up at <a href " rel "nofollow" target " blank">www.wandershare.com</a> for high res images Where did English come from? - Claire Bowern There are two other TED-Ed lessons related to this topic: How languages evolve and How did English evolve? (a lesson that fills in some of the details that we omit here due to the fact that the focus of this lesson was further in the past). There is still a great deal of debate about Indo-European, most importantly about the location of the homeland. To read more about this debate, there are classic books by Mallory and Renfrew, as well more recent works by Anthony. Then, read these articles by Bouckaert et al. To learn more about the distribution of languages across the world, see LL-map or The Ethnologue.

Aboriginal Australia: History, Culture, and Conflict Aboriginal AustraliaHistory and culture of Australia's indigenous peoples Who Are Aborigines? Aborigines are Australia's indigenous people. Australian Aborigines migrated from somewhere in Asia at least 30,000 years ago. "The Dreamtime" Aboriginal spirituality entails a close relationship between humans and the land. Unlike other religions, however, aboriginal belief does not place the human species apart from or on a higher level than nature. Storytelling, Art, and the Didgeridoo The oral tradition of storytelling informs aboriginals' vibrant cultural life. In the Northern Territory, aboriginal art includes sculpture, bark and rock paintings, and baskets and beadwork. Aboriginal music is often recognizable for its most famous instrument, the didgeridoo. Land Rights Movement As a result of forced assimilation, by the late 1880s most aborigines had joined white rural and urban communities. Land and property rights fueled an important civil rights movement in the 1970s.

This Is What A World Map Looks Like When Scaled According To Population Size Where in the world did Australia go?! A new cartogram by Redditer TeaDranks rescales the world’s countries according to population size instead of geographic area. Reconstructing maps based on different variables can be a powerful tool for understanding the world we live in. In this case, certain regions almost disappear from the map while others expand considerably; Canada transforms into a thin, jagged line while India now takes up a massive amount of space. Other interesting tidbits: North Korea has a larger population than Australia, with 25.1 million people compared to 23.7 million, respectively. “I was inspired by this map which is now ten years old,” said TeaDranks. It is important to note that even modern world maps distort the Earth. To check out a high-resolution version of the map, click here. Credit: TeaDranks / Reddit Read this next: Improved Anti-HIV Antibodies Created Through Genetic Engineering