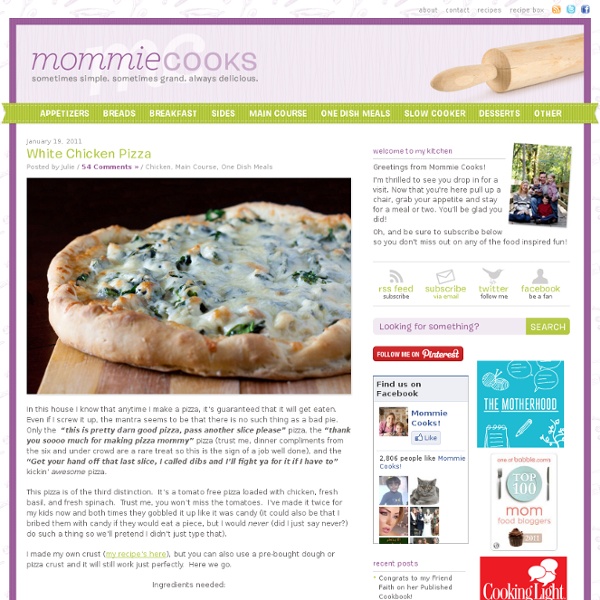 January 19, 2011 White Chicken Pizza In this house I know that anytime I make a pizza, it’s guaranteed that it will get eaten. Even if I screw it up, the mantra seems to be that there is no such thing as a bad pie. Only the “this is pretty darn good pizza, pass another slice please” pizza, the “thank you soooo much for making pizza mommy” pizza (trust me, dinner compliments from the six and under crowd are a rare treat so this is the sign of a job well done), and the “Get your hand off that last slice, I called dibs and I’ll fight ya for it if I have to” kickin’ awesome pizza. This pizza is of the third distinction. I made my own crust (my recipe’s here), but you can also use a pre-bought dough or pizza crust and it will still work just perfectly. Ingredients needed: Throw your chicken, shallots, garlic and the salt/pepper in a skillet and cook them up on medium heat. Once they’re cooked through, remove them from the heat. Next up, the spinach.

justJENN recipes » Iron Man Pizza Hand Pies Tony Stark is the man. No literally. THE man, Iron Man – and for some reason I can only envision little Iron Man hand pies filled with…pizza. Oh, so delicious. I used the Marvel cookie cutter set from Williams Sonoma. And like my Captain America Apple hand pies, these couldn’t be easier.

Cheesy Chicken, Bacon & Avocado Quesadillas What is it about bacon & avocado that I absolutely love?? I am especially loving these quesadillas right now. With their buttery, crispy, heavenly tortilla shells… Yum! They’re one of our favorite quick & easy weeknight meals. Pizza Swirl Bread I have good news and bad news. The good news is… I made you bread. It tastes like pizza. It’s swirled with piles of grated provolone and spicy pepperoni and a nice little mixture of Italian seasoning [...that came out of a tube]. Yeah.

Pepperoni Pizza Monkey Bread Kids can be frustratingly picky eaters. They can also have highly entertaining quirks. My niece used to ask for pepperoni pizza and then proceed to discard all of the pepperoni. Pizza Braid A pizza braid is very kid-friendly, easy on the wallet and extremely simple to make. My aunt and cousin first introduced me to them and I’ve been hooked ever since. The possibilities are endless of the varieties you could make (check out the Apple Dessert Braid!), but the recipe below is for a very basic hamburger and pepperoni braid. You could make your own dough, but I prefer the shortcut of using Rhodes rise and bake dough.

Cheese Pinwheel Rolls Sooner or later, all my conversations inevitably turn to food. Don’t believe me? Call me up sometime and try to, say, sell me some insurance. I guarantee that before we get off the phone, I’ll be giving you my recipe for blackberry jam. Bacon Breakfast Pizza This is part of my Oh My Bacon Grease! Series. To see how it all began, click here. I’m working on filling up my bacon grease jar today so I followed my mother’s advice and decided to make her breakfast pizza, starring bacon. In it’s original form, this recipe could feed an army.

The Pastry Affair - Home - Garlic Parmesan Pull-Apart Bread I once made the driest pancake in the world. I can see you sitting at home, staring at your computer screen, and scoffing at my bold statement. Driest pancake in the world? Yeah, right. How would you even know? Brown Sugar Bacon Buttermilk Waffles So you pretty much need to make these waffles immediately. This was my first foray into homemade waffles, and I was blown away by the results. Although I have owned a Belgian-waffle maker for a few years now, all I had ever done was mix up some Bisquick which, now that I think about it, is probably an insult to my awesome Waring Pro round “flip over” fancy-schmancy waffle maker. Well, I’m sure it was happy to see this batter hitting its surface. Imagine bacon that is topped with brown sugar and then baked in the oven so that the brown sugar carmelizes into a glaze on top of the bacon.

Stumblers Who Like Omnomicon makes » recipe: ice cream cake (but not like... If you’ve been following along, you’re probably aware that I collect cookbooks. Specifically, cookbooks created by New England civic organizations between 1950 and 1980 for fundraising purposes. With yard sale season in full swing, I find myself solvent with new recipe ideas, among them one I found in this vandalized and water-damaged collection. The picture on the cover somewhat suggests the architecture of Calvary Baptist Church in Easthampton, but I bought the book in Millbury and it has no date (I’ve never been to that Church, I just tried to do some due diligence in my googling). Nevertheless, it *does* include a chocolate cake recipe with a secret ingredient: ice cream.

Italian Grilled Cheese Who doesn’t love a good grilled cheese? And, I know it’s totally Ameeeerican to make the classic: American cheese, mayonnaise and bread. But, why not change it a bit and use REALLY fresh and natural ingredients?!?!? Broccoli and White Cheddar Mac & Cheese « The Craving Chronicles Mac & cheese. Oh how I love mac & cheese. It’s one of my favorite foods on the planet (besides chocolate). Whenever it’s cold outside or I need some comfort or I’m hungry or it’s a day that ends in ‘y’, I turn to mac & cheese. I’ve had to impose mac & cheese limits on myself to keep from eating it every day of the week.