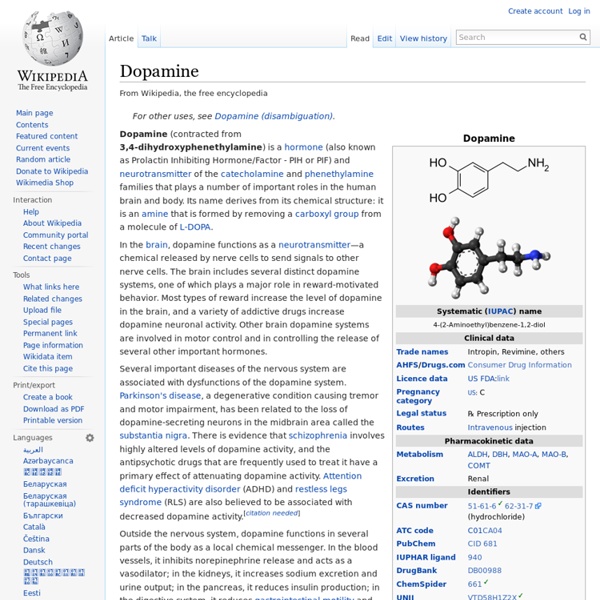 Dopamine (contracted from 3,4-dihydroxyphenethylamine) is a hormone (also known as Prolactin Inhibiting Hormone/Factor - PIH or PIF) and neurotransmitter of the catecholamine and phenethylamine families that plays a number of important roles in the human brain and body. Its name derives from its chemical structure: it is an amine that is formed by removing a carboxyl group from a molecule of L-DOPA. In the brain, dopamine functions as a neurotransmitter—a chemical released by nerve cells to send signals to other nerve cells. The brain includes several distinct dopamine systems, one of which plays a major role in reward-motivated behavior. Most types of reward increase the level of dopamine in the brain, and a variety of addictive drugs increase dopamine neuronal activity. Several important diseases of the nervous system are associated with dysfunctions of the dopamine system. Outside the nervous system, dopamine functions in several parts of the body as a local chemical messenger.

Endorphins Endorphins ("endogenous morphine") are endogenous opioid peptides that function as inhibitory neurotransmitters.[1] They are produced by the pituitary gland and the hypothalamus in vertebrates during exercise,[2] excitement, pain, spicy food consumption, love, and sexual activity,[3][4] and they resemble the opiates in their abilities to produce analgesia and a feeling of well-being. The term implies a pharmacological activity (analogous to the activity of the corticosteroid category of biochemicals) as opposed to a specific chemical formulation. It consists of two parts: endo- and -orphin; these are short forms of the words endogenous and morphine, intended to mean "a morphine-like substance originating from within the body."[5] The term "endorphin rush" has been adopted in popular speech to refer to a feeling of exhilaration that can be brought on by pain, danger, or other forms of stress,[2] supposedly due to the influence of endorphins. History[edit] Mechanism of action[edit]

Pair bond In biology, a pair bond is the strong affinity that develops in some species between a pair consisting of a male and female, or in some cases as a same-sex pairing, potentially leading to producing offspring and/or a lifelong bond. Pair-bonding is a term coined in the 1940s[1] that is frequently used in sociobiology and evolutionary psychology circles. The term often implies either a lifelong socially monogamous relationship or a stage of mating interaction in socially monogamous species. It is sometimes used in reference to human relationships. Monogamous voles, such as prairie voles, have significantly greater density and distribution of vasopressin receptors in their brain when compared to polygamous voles. Both vasopressin and dopamine act in this region to coordinate rewarding activities such as mating, and regulate selective affiliation. Varieties[edit] Black-backed jackals are one of very few monogamous mammals. Examples[edit] See also[edit] References[edit] Jump up ^ "Pair-bond".

la joie 9 Ways Facebook Is Changing People’s Lives Pan Xunbin / Shutterstock Facebook has over 800 million users, and researchers and pollsters have been busy studying them. Here are some of the ways the site is impacting people's lives and changing their behavior. 1. You Might Be Addicted If you're on Facebook, could you go 24 hours without checking your page? 2. When polled, a majority of people admit to snooping on their significant other through social media. 3. While many employers are blocking their workers’ access to social networking sites like Facebook and Twitter, studies have shown that people who use Facebook at work are actually up to 9% more productive than people who don't. 4. Most people use social networks to talk about the positives in their lives. Since you are only seeing the good part of a hundred or more people’s lives, you may end up feeling increasingly upset about the problems in your own life, which, at least according to their pages, none of your friends have. 5. ...or it Can Boost Your Self Esteem 6. 7. 8. 9.

Oxytocin Oxytocin (/ˌɒksɨˈtoʊsɪn/; Oxt) is a mammalian neurohypophysial hormone. Produced by the hypothalamus and stored and secreted by the posterior pituitary gland, oxytocin acts primarily as a neuromodulator in the brain. Oxytocin plays an important role in the neuroanatomy of intimacy, specifically in sexual reproduction of both sexes, in particular during and after childbirth; its name comes from Greek ὀξύς, oksys "swift" and τόκος, tokos "birth." Recent studies have begun to investigate oxytocin's role in various behaviors, including orgasm, social recognition, pair bonding, anxiety, and maternal behaviors.[4] For this reason, it is sometimes referred to as the "bonding hormone". It is on the World Health Organization's List of Essential Medicines, a list of the most important medications needed in a basic health system.[7] Medical uses[edit] Injected oxytocin analogues are used for labor induction and to support labor in case of difficult parturition. Side effects[edit]

faire le vide Ocean's toxic alkalisation spurred animal evolution - life - 18 April 2012 HOW ironic. Concerns abound about the acidification of oceans due to climate change. Meanwhile, researchers have found evidence that the reverse - a massive and toxic alkalisation of the oceans hundreds of millions of years ago - paradoxically made animal life flower. Complex animals first appeared 850 million years ago but didn't evolve into a great variety of forms until the Cambrian period, 540 million years ago. Why the delay? Answering this is difficult, in part because rocks that formed immediately before the Cambrian appear to have vanished. Shanan Peters of the University of Wisconsin-Madison and Robert Gaines of Pomona College in Claremont, California, now suggest this crucial rock record may have dissolved into the ocean. The result was toxic. New Scientist Not just a website! More From New Scientist 410-million-year-old arachnid crawls back to life (New Scientist) Neanderthal demise traced in unprecedented detail (New Scientist) Human sex from the inside out (New Scientist)

Reward system Drugs of abuse target the brain's pleasure center.[1] Certain neural structures, called the reward system, are critically involved in mediating the effects of reinforcement. A reward is an appetitive stimulus given to a human or some other animal to alter its behavior. Reward or reinforcement is an objective way to describe the positive value that an individual ascribes to an object, behavioral act or an internal physical state. Definition[edit] In neuroscience, the reward system is a collection of brain structures that attempts to regulate and control behavior by inducing pleasurable effects. History[edit] James Olds and Peter Milner were researchers who found the reward system in 1954. Skinner box Anatomy of the reward system[edit] The major neurochemical pathway of the reward system in the brain involves the mesolimbic and mesocortical pathways. Animals vs humans[edit] Modulation by drugs[edit] Psychological drug tolerance[edit] Sensitization[edit] Neurotransmitters and reward circuits[edit]