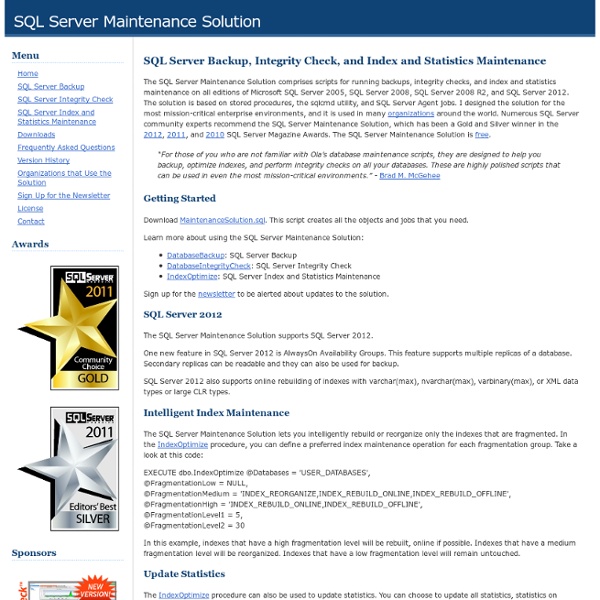 SQL String User Function Workbench: part 2 /* In which Robyn and Phil pull together the themes from their TSQL String Array Workbench and String User Function workbench, to provide a simple TSQL string-handling package. */ This workbench finishes of what has been a three-part series of string functions. In it, we introduce the idea of using XML to provide a very simple array for doing string handling. This allows us to use functions for searching and splitting strings that will be familiar to users of procedural languages such as PHP and Python. The first part, TSQL String Array Workbench showed how the basics worked and then demonstrated how it could be used with a PHP-style string function. Of course, this principle could be extended to arrays and matrices. We then got rather diverted by the Python string functions (now string methods) and so wrote the SQL String User Function Workbench: part 1 that emulated all the python string functions that didn't have lists as parameters so we didn't use the XML array mechanism. p.s.

URLEncode Hello Robert Cary, Thank you for the cool TSQL URLEncode script, it was almost exactly what I was looking for. I slightly modified it to allieviate the need for creating/populating table numbers by selecting from a derived table using RowNum() as the incremented field [num] Alzowze ";0)ps... IF EXISTS ( SELECT 1 FROM dbo.sysobjects WHERE id = OBJECT_ID(N'[dbo]. CREATE FUNCTION [dbo]. DECLARE @encodedString VARCHAR(4000) IF @decodedString LIKE '%[^a-zA-Z0-9*-.! WHERE num BETWEEN 1 AND LEN(@decodedString) AND SUBSTRING(@decodedString,num,1) like '[^a-zA-Z0-9*-.! ENDELSEBEGIN SELECT @encodedString = @decodedString END RETURN @encodedString

Tibor Karaszi's SQL Server pages Overview The purpose of this article is to explain how the datetime types work in SQL Server, including common pitfalls and general recommendations. Thanks to SQL Server MVP Frank Kalis, this article is translated to German. There is also a Russian version, thanks to Evgeny Vinchyk from Ukraine, available as a word document. Acknowledgements I like to thank the following persons who provided valuable suggestions and input for this article: Steve Kass, Aaron Bertrand, Jacco Schalkwijk, Klaus Oberdalhoff, Hugo Kornelis, Dan Guzman and Erland Sommarskog. Versions of SQL Server This article applies to SQL Server 7.0, 2000, 2005 and 2008, where not noted otherwise. Date and time types in SQL Server Prior to SQL Server 2008, there are two types in SQL Server to handle date and time. Note that there is no type to store only date or only time. SELECT CAST('20041223' AS datetime) ----------------------- 2004-12-23 00:00:00.000 As you can see, we have finally a date-only and a time-only type. What?

Slow in the Application, Fast in SSMS? An SQL text by Erland Sommarskog, SQL Server MVP. Last revision: 2013-08-30. This article is also available in Russian, translated by Dima Piliugin. Introduction When I read various forums about SQL Server, I frequently see questions from deeply mystified posters. No, SQL Server is not about magic. To understand how to address that performance problem in your application, you need to read on. Table of Contents Presumptions The essence of this article applies to all versions of SQL Server, but the focus is on SQL 2005 and later versions. For the examples in this article I use the Northwind sample database. This is not a beginner-level article, but I assume that the reader has a working experience of SQL programming. Caveat: In some places I give links to the online version of Books Online. How SQL Server Compiles a Stored Procedure In this chapter we will look at how SQL Server compiles a stored procedure and uses the plan cache. What is a Stored Procedure? Stored procedures. Overview