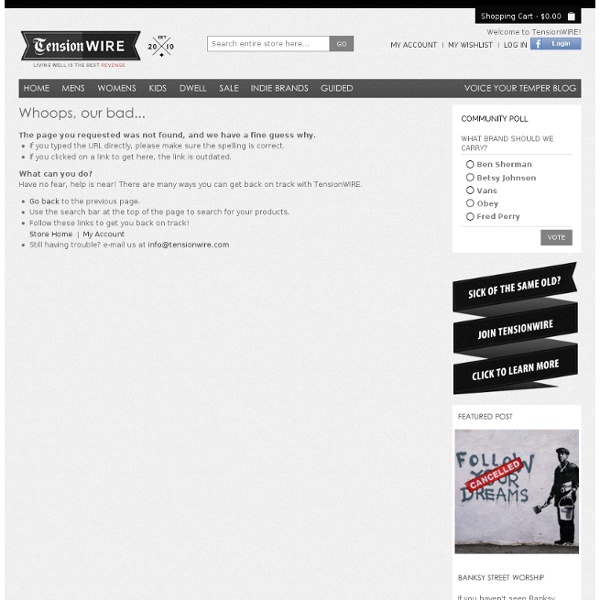 <div class="noscript"><div class="noscript-inner"><p><strong>JavaScript seem to be disabled in your browser.</strong></p><p>You must have JavaScript enabled in your browser to utilize the functionality of this website.</p></div></div> The page you requested was not found, and we have a fine guess why. If you typed the URL directly, please make sure the spelling is correct.If you clicked on a link to get here, the link is outdated. What can you do? Have no fear, help is near! Go back to the previous page.Use the search bar at the top of the page to search for your products.Follow these links to get you back on track! ShareThis Copy and Paste

Rashad Alakbarov Paints with Shadows and Light This is kind of flying all over the internet right now, but I couldn’t resist sharing. Artist Rashad Alakbarov from Azerbaijan uses suspended translucent objects and other found materials to create light and shadow paintings on walls. The jaw-dropping light painting above, made with an array of colored airplanes is currently on view at the Fly to Baku exhibition at De Pury Gallery in London through January 29th. (via art wednesday, fasels suppe) lead pencil studio: non-sign II nov 25, 2010 lead pencil studio: non sign II ‘non-sign II’ is an installation by seattle based art collective lead pencil studio located at the canada-US border near vancouver. the sculpture is made from small stainless steel rods that are assembled together to create the negative space of a billboard. while most billboards draw attention away from the landscape ‘non-sign II’ frames the landscape, focusing attention back on it.

Controversial Sculptures by David Cerny Continuing our article series about the most creative artists in the world this time we present David Cerny from Czech Republic. Wikipedia: “David Černý (born December 15, 1967 in Prague) is a Czech sculptor whose works can be seen in many locations in Prague. His works tend to be controversial. He gained notoriety in 1991 by painting a Soviet tank pink that served as a war memorial in central Prague. Heike Weber Installations Utterly amazing installations by Heike Weber. She draws with permanentmarkers on acrylic floor and walls – surfaces that have reached up to 600 m2. I can’t begin to imagine how time consuming these breathtaking installations must have been. Via TRIANGULATION

Exposing Texas's Ungodly Heat, With Giant Melting Crayon Sculptures Blazes have been ripping across Texas this year, as the state endures its worst drought in history. To educate the public about wildfires, the National Ranching Heritage Center (NRHC) in Lubbock commissioned Tennessee artist Herb Williams to construct a smattering of giant, flame-shaped sculptures, some 8 feet tall, using 60,000 to 70,000 Crayola crayons. As time passes, the crayons melt and warp on the landscape, their slumped forms exposing the parched, blowy conditions that feed real flames. Unwanted Visitor: Portrait of Wildfire opened October 7 and already, as you can see in the photo above, the sculptures have liquefied significantly. Williams built Unwanted Visitor with a grant from the Texas Commission on the Arts. “We were very excited about this because their budget has been cut so drastically this year,” NRHC’s Emily Arellano tells Co.Design.

Kevin Francis Gray – Haunting Sculptures + New .COMs $7.99/yr plus 18 cents/yr ICANN fee. Discount based on new one-year registration prices as of 1/27/2012 with sale price reflected in your shopping cart at checkout. Discount applies to new registrations and renewals and cannot be used in conjunction with any other offer or promotion. Domains purchased through this offer will renew at regular price after the initial term has expired. It is Not Digital, It is Anamorphic Art! & Illusion & The Most Amazing Creations in Art, Photography, Design, and Video. - StumbleUpon Artist Felice Varini is a master of anamorphic installations. He paints directly on indoor and outdoor spaces such as rooms, stairways, buildings, and more. His work requires that you view it at a specific angle, so that you can see geometric shapes.

Strange Sculptures Made of Discarded Clothes (15 pics) Chances are that if you ran into Guerra de la Paz's colorful sculptures in an art museum, you'd enjoy them from afar and then take a few steps closer. That's because the Cuban born American artists who make up Guerra de la Paz, Alain Guerra and Neraldo de la Paz, create curiously interesting sculptures made out of old clothes. In fact, they originally took their materials from the waste bins of second-hand goods shipping companies in Miami’s Little Haiti. Seoul-based artist Choi Xooang Choi Xooang has a amazing capability to pull you into his work. Mixing amazing technique and utter blunt shocking images Choi is climbing my list of favorite artists. Half of his outlandish pieces are not done just for shock value but to bring awareness to human right abuses in Korea. Also, if you like this, you’ll most likely enjoy the work of Emil Alzamora. (via This is colossal)

Quilling - Turning Paper Strips into Intricate Artworks Quilling has been around for hundreds of years, but it’s still as impressive and popular now as it was during the Renaissance. The art of quilling first became popular during the Renaissance, when nuns and monks would use it to roll gold-gilded paper and decorate religious objects, as an alternative to the expensive gold filigree. Later, during the 18th and 19th centuries, it became a favorite pass-time of English ladies who created wonderful decorations for their furniture and candles, through quilling. Basically, the quilling process consists of cutting strips of paper, and rolling them with a special tool. It sounds simple enough, but special skill is required to create more advanced shapes like marquises, arrowheads or holly leaves.

Pencil Lead Sculpture Most of us will agree with the age-old saying that “patience is a virtue.” How many of you, however, would actually hang on for two years and a half to bring a piece of art into existence? Dalton Ghetti, 49, a Bridgeport artist, has spent 25 good years working with a razor blade, a sewing needle and a sculpting knife for carving his unique art on the graphite of pencil. The artist says: