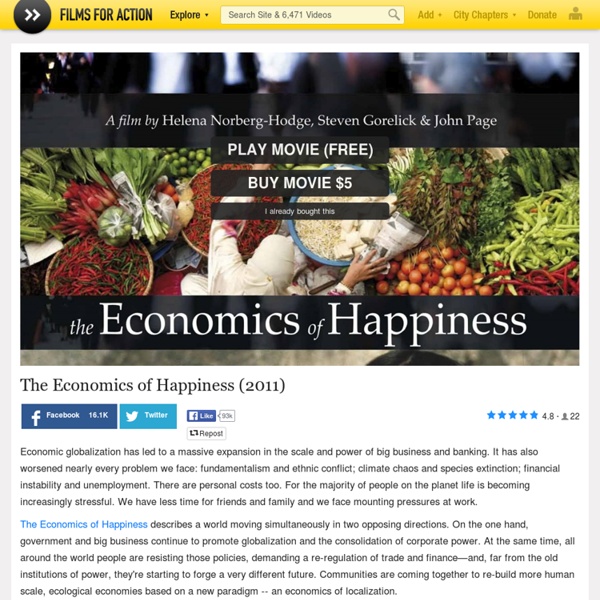 Economic globalization has led to a massive expansion in the scale and power of big business and banking. It has also worsened nearly every problem we face: fundamentalism and ethnic conflict; climate chaos and species extinction; financial instability and unemployment. There are personal costs too. For the majority of people on the planet life is becoming increasingly stressful. We have less time for friends and family and we face mounting pressures at work. The Economics of Happiness describes a world moving simultaneously in two opposing directions. We hear from a chorus of voices from six continents including Vandana Shiva, Bill McKibben, David Korten, Michael Shuman, Juliet Schor, Zac Goldsmith and Samdhong Rinpoche - the Prime Minister of Tibet's government in exile.

Basic Income Gathers Steam Across Europe Barcelona. In the last few months basic income—an unconditional cash payment to every member of the population—has been getting more and more attention in the media and social networks. Three items are especially interesting. First, Yanis Varoufakis, the able Greek economist, Minister for Finance in the first Syriza government and well known for his trenchant opposition to Troika austerity measures bashing the poor and already vulnerable majority of the population, has become such a media star that every time he gives an opinion on political economy, some theoretical aspect of economics or economic policy, his words are widely disseminated. Hence, his remarks on basic income, which he described as “a necessity” at the Future of Work conference in Zurich on 5 May 2016, are of no small import.

PROPAGANDA (2012) Since it mysteriously appeared on YouTube on July 18, 2012, ‘Propaganda’ has been described as ‘1984 meets The Blair Witch Project’, ‘A mouthful of scary porridge’, and ‘Even better than Triumph of The Will.’ It topped Indiewire’s top 10 films to watch out for at IDFA, where it had its world premiere. This was followed by The Independent declaring it ‘the real viral hit of 2012’ and Films for Action rating it their Number One film for 2012. So far, the film has been translated in to six languages. Controversial to the core, ‘Propaganda’ is part of an ongoing international incident involving the Australian Federal Police, the South Korean Embassy in New Zealand, the Catholic Church, the Counter-Terrorism Unit in Christchurch and the Korean Society, which has publicly accused the filmmakers of being North Korean agents. From "Sabine": Here is the formal statement I gave to Federal Police on 16 June 2012:

In Transition 2.0: A Story of Resilience & Hope in Extraordinary Times (2012) This film is an inspirational immersion in the Transition movement, gathering stories from around the world of ordinary people doing extraordinary things. There are stories of communities printing their own money, growing food, localising their economies and setting up community power stations. Transition is an idea that has gone viral, a social experiment that is about responding to uncertain times with solutions and optimism. Why Understanding Obstacles is Essential to Achieving Goals There is no shortage of pithy quotes encouraging positive thinking: “If you can dream it, you can do it.” “Reach for the stars!” “Look on the bright side.”

Introduction What is degrowth actually about? Degrowth is a perspective and an emerging social movement, which in the last few years brought together a multitude of projects and ongoing debates around alternative economies. The main idea of degrowth is an economy and society which aims for the well-being of all and for ecological sustainability. One key conviction is that social and ecological global justice can only be achieved when the destructive economic activities of the global North are reduced. Degrowth criticises the current framework of society, which always calls for “higher, faster, further”, as well as connected phenomena like acceleration, excessive demands, marginalization and the destruction of the global ecosystem.

HUMAN (2015) What is it that makes us human? Is it that we love, that we fight? That we laugh? Cry? Our curiosity? The quest for discovery? This 2016 Resolution for Humanity Will Give You Chills and Light a Fire Under Your Feet For 2016, we need a resolution capable of confronting the crisis we face, and making a future worth fighting for. "A Resolution" looks back on the crisis and confusion of 2015: climate change-driven wildfires, droughts, and storms; ISIS and their attacks in Paris, Beirut, and Ankara; bankrupt political leaders at COP21 debating how fast to kill the world; and an ever growing number of people murdered by police across American cities. As times grow darker, as despair and hopelessness grow in tandem with stupidity and horror, people everywhere are searching for vision and direction. As people worldwide are taking stock, looking backwards to 2015 and forward to 2016, "A Resolution" shows that amidst growing catastrophe, the only real future is the one we’ll make. Woodbine is a hub for building autonomy in the Anthropocene. Our mission is to grow collective material and organizational capacities and build revolution in the 21st century.

Junk Food Isn't Just Making People Fat—It's Making Them Stupid Crossword, Sudoku, and Jeopardy! enthusiasts beware: Every french fry and candy bar you consume might be throwing off your game. A study conducted by researchers at Oregon State University and published in the journal Neuroscience suggests that high-fat, high-sugar diets have a detrimental effect on what they refer to as "cognitive flexibility," or the power to adapt and adjust to changing situations. The research was performed using laboratory mice that consumed diets with varying levels of fat and sugar before facing a gamut of tests—primarily mazes and basic puzzles—to monitor changes in their mental and physical function. The researchers paid specific attention to the types of gut bacteria present in each control group.

Finally, a breakthrough alternative to growth economics – the doughnut So what are we going to do about it? This is the only question worth asking. But the answers appear elusive. Faced with a multifaceted crisis – the capture of governments by billionaires and their lobbyists, extreme inequality, the rise of demagogues, above all the collapse of the living world – those to whom we look for leadership appear stunned, voiceless, clueless. 2012: Time For Change (2010) "2012: Time for Change" presents an optimistic alternative to apocalyptic doom and gloom. Directed by Emmy Award nominee João Amorim, the film follows journalist Daniel Pinchbeck, author of the bestselling 2012: The Return of Quetzalcoatl, on a quest for a new paradigm that integrates the archaic wisdom of tribal cultures with the scientific method. As conscious agents of evolution, we can redesign post-industrial society on ecological principles to make a world that works for all.

Greece to receive 1000 Bitcoin ATMs AnonHQ Economy Bitcoin ATMs could spring up across Greece as soon as October, as citizens and businesses become increasingly desperate to move their money despite capital controls. BTCGreece, which bills itself as the country’s first bitcoin exchange, plans to eventually install 1,000 ATMs nationwide, in partnership with European bitcoin platform, Cubits: “We are creating the ecosystem of bitcoin and blockchain solutions in the Greek market,” BTC Greece founder, Thanos Marinos told CoinTelegraph. “That will include the rollout of 1,000 ATMs and solutions for the e-commerce and tourism industry. Partnering with best of breed companies in the bitcoin space will enable us to provide the Greeks with solutions that will ease the difficulties of the capital controls.”

How to Protect The Body Against AI Assimilation (Morgellons) The body is an amazing thing, despite the program of 'disgust' we are all indoctrinated into on Earth. Can you mistreat a car for a long time and expect it to keep running? Probably not, but our bodies can take an enormous amount of punishment. Even after a long life of unconscious habits that slowly destroy this temple for our consciousness, it can still be rejuvenated.The body can be thought of as a network of cells, tissue and biochemical structures all working as a reflection of its environment; our consciousness and choices.