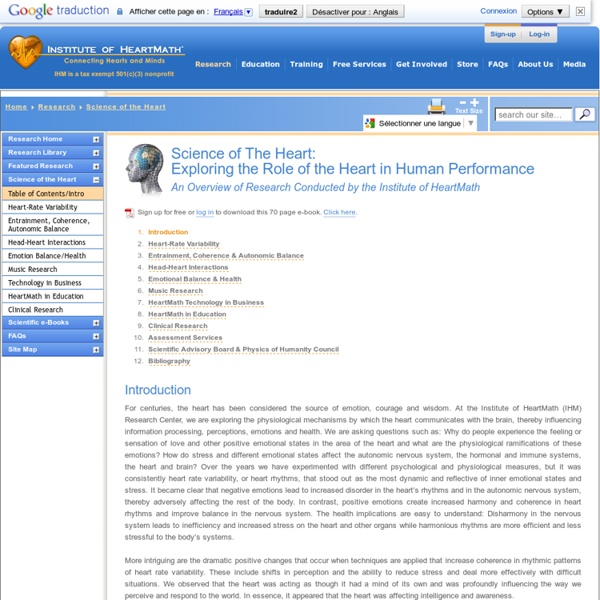 For centuries, the heart has been considered the source of emotion, courage and wisdom. At the Institute of HeartMath (IHM) Research Center, we are exploring the physiological mechanisms by which the heart communicates with the brain, thereby influencing information processing, perceptions, emotions and health. We are asking questions such as: Why do people experience the feeling or sensation of love and other positive emotional states in the area of the heart and what are the physiological ramifications of these emotions? How do stress and different emotional states affect the autonomic nervous system, the hormonal and immune systems, the heart and brain? Over the years we have experimented with different psychological and physiological measures, but it was consistently heart rate variability, or heart rhythms, that stood out as the most dynamic and reflective of inner emotional states and stress. Compiled by Rollin McCraty, Mike Atkinson and Dana Tomasino. All rights reserved. Dr. Related:  Biology

About Biomimicry 3.8 is the global leader in biomimicry innovation consulting, professional training, and educational program and curricula development. Our mission is to train, equip, and connect engineers, educators, architects, designers, business leaders, and other innovators to sustainably emulate nature’s 3.8 billion years of brilliant designs and strategies. Over the past 14 years, our company has helped more than 250 clients and partners redesign carpets, furniture, manufacturing processes, airplanes, and even entire cities, all in nature’s sustainable image. In concert with our partners we have reached millions through talks and the media and have trained hundreds who now practice biomimicry in their professions. A Brief History When Janine Benyus popularized the term “biomimicry” in her seminal book Biomimicry: Innovation Inspired by Nature (1997), she admits she had no idea it would galvanize an entire movement. Then, we all evolved.

David R Hamilton PhD | Using Science to Inspire Phage - The Virus that Cures - Science on DocuWatch From Wikipedia A bacteriophage (from 'bacteria' and Greek - to eat") is any one of a number of viruses that infect bacteria. Bacteriophages are among the most common organisms on Earth. The term is commonly used in its shortened form, phage. Typically, bacteriophages consist of an outer protein capsid enclosing genetic material. The genetic material can be ssRNA, dsRNA, ssDNA, or dsDNA ('ss-' or 'ds-' prefix denotes single-strand or double-strand) between 5,000 and 500,000 nucleotides long with either circular or linear arrangement. Phages are estimated to be the most widely distributed and diverse entities in the biosphere. They have been used for over 60 years as an alternative to antibiotics in the former Soviet Union and Eastern Europe.

waking times This Is Your Brain On Aspartame Margie King, Green Med InfoWaking Times Controversy continues to rage over the artificial sweetener aspartame. Since it was first approved by the Food and Drug Administration (FDA) in 1981, aspartame has made its way into more than 6,000 food items. The FDA claims aspartame is safe but has … More 4 Things You Should Know About Your ‘Third Eye’ Scott Thill, AlterNetWaking Times We still lack a complete understanding of the pineal gland — but that doesn’t stop us from speculating. Located in nearly the direct center of the brain, the tiny pinecone-shaped pineal gland, which habitually secretes the wondrous neurohormone melatonin while we sleep at night, was … More The Synchronized Brains of Movie Viewers Heather Callaghan, GuestWaking Times Why read the book when I can watch the movie version? 7 Ways Our Children Are Being Brainwashed Gregg Prescott, M.S., In5D GuestWaking Times 1. As children, the brainwashing begins … More Time Compression and the Psychonaut Dr.

Mucus found to harbor a previously unknown human immune system Though not something people like to ponder, the purpose of mucus as a protective barrier that keeps underlying tissues moist and traps bacteria and other foreign organisms is well known. However, researchers at San Diego State University (SDSU) have now discovered that the surface of mucus is also the site of an independent human immune system that actively protects us from infectious agents in the environment. Mucus is produced by tissue that lines the inner surfaces of the body which come into contact with the outer environment. The mouth, nose, sinuses, throat, lungs, and gastrointestinal tract all possess mucus-producing tissue. The mucus layer has long been identified as providing protection against the outside world, but in a rather passive manner. No longer. Bacteriophage adheres to mucus layers and provides immunity against invading bacteria (Image: Jeremy Barr) To double check this hypothesis, cells not coated by mucus were also exposed to E. coli.

Jia Ni Teo | Happy Healthy Abundant The second brain in our stomachs 10 July 2012Last updated at 20:53 ET By Michael Mosley BBC TV Michael Mosley swallows a tiny camera which streams live images of his digestive system Our own stomachs may be something of a dark mystery to most of us, but new research is revealing the surprising ways in which our guts exert control over our mood and appetite. Not many of us get the chance to watch our own stomach's digestion in action. But along with an audience at London's Science Museum, I recently watched live pictures from my own stomach as the porridge I had eaten for breakfast was churned, broken up, exposed to acid and then pushed out into my small intestine as a creamy mush called chyme. I had swallowed a miniature camera in the form of a pill that would spend the day travelling through my digestive system, projecting images onto a giant screen. Its first stop was my stomach, whose complex work is under the control of what's sometimes called "the little brain", a network of neurons that line your stomach and your gut.

21 Traits of an Awakening Soul Christina Sarich, ContributorWaking Times You can say its because of a global shift in consciousness, a destiny we have arrived at due to spiritual evolution, or the outcome of strange times, but, many people all across the globe are going through intense personal changes and sensing an expansion of consciousness. Personal changes of this magnitude can be difficult to recognize and to understand, but here are 21 traits of an awakening soul, a ‘sensitive’, or an ‘empath.’ 1. 2. 3. 4. 5. 6. 7. 8. 9. 10. 11. 12. 13. 14. 15. 16. 17. 18. 19. 20. 21. These 21 traits of an awakening soul are a reminder of how important it is to maintain awareness, clarity and strength in these interesting times. About the Author Christina Sarich is a musician, yogi, humanitarian and freelance writer who channels many hours of studying Lao Tzu, Paramahansa Yogananda, Rob Brezny, Miles Davis, and Tom Robbins into interesting tidbits to help you Wake up Your Sleepy Little Head, and See the Big Picture.