How to Teach Students to Evaluate the Quality of Online Information 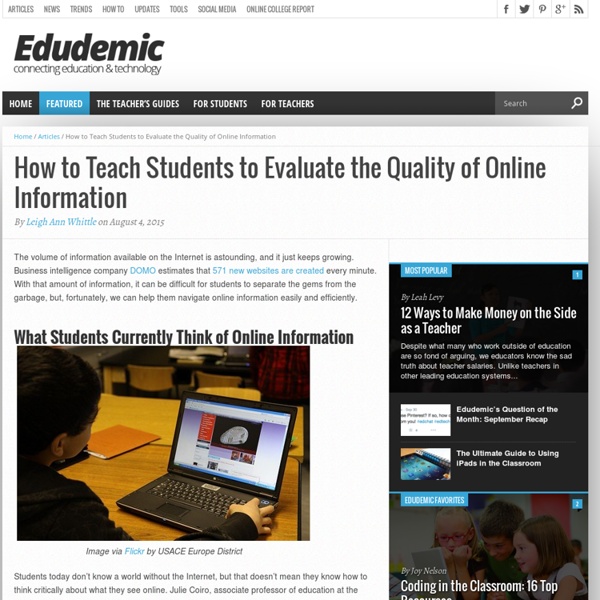 The volume of information available on the Internet is astounding, and it just keeps growing. Business intelligence company DOMO estimates that 571 new websites are created every minute. With that amount of information, it can be difficult for students to separate the gems from the garbage, but, fortunately, we can help them navigate online information easily and efficiently. What Students Currently Think of Online Information Image via Flickr by USACE Europe District Students today don’t know a world without the Internet, but that doesn’t mean they know how to think critically about what they see online. Coiro suggests strategies to help students to effectively evaluate what they see on the Internet, practice refuting what is on the Internet, and cross-check claims. Identifying Good Content There are a few checks and balances to ensure that online content is indeed credible. Learning to Use Websites Effectively Students may not understand the differences in quality between websites.

Is School For Everyone? Some Say ‘No’ Several years ago, few people who knew Hannah Noblewolf would have thought that she would turn out to be an outgoing, articulate, self-assured young woman who has successfully completed her first year at her top-choice college. For years, she struggled with social anxiety, depression and, as a result, school. She had always been bright — she even skipped fourth grade — but her intellectual acuity, paired with being younger than her classmates, made her school life deeply unpleasant. Noblewolf comes from a highly educated, upper-middle-class family where academic success was not up for discussion. Neither she nor her parents would ever have believed that dropping out of school would be what was best for her. Mandela Day Mandela Day is on 18 July. This integrated skills lesson plan for upper-secondary students looks at Nelson Mandela's life and explores some of themes surrounding South Africa during apartheid. Introduction

For Students, Why the Question is More Important Than the Answer Thinkstock In a traditional classroom, the teacher is the center of attention, the owner of knowledge and information. Teachers often ask questions of their students to gauge comprehension, but it’s a passive model that relies on students to absorb information they need to reproduce on tests.

Class Story- A New Excellent Platform for Teacher-Parent Communication September 5, 2015 The popular educational platform ClassDojo released today a new interesting tool called ‘Class Story’ which enables teachers to ‘easily and safely share updates and photos from class with parents’. Class Story is an excellent alternative to a public classroom website or blog and teachers can use it as a secure and private space where they can communicate with parents and engage in the learning of their kids. Fostering teacher-parent communication is the driving philosophy behind Class Story and as, Don Liam (chief product officer of ClassDojo) stated, it reduces ‘the friction in communicating with parents by providing a quick way to share important updates, photos, and all the moments parents would love to see but previously couldn’t.' Being part of ClassDojo app, Class Story works and syncs across any iOS/Android device and any web browser for both teachers and parents.

Best Young Adult Novels, Best Teen Fiction, Top 100 Teen Novels It's almost a cliche at this point to say that teen fiction isn't just for teens anymore. Just last year, the Association of American Publishers ranked Children's/Young Adult books as the single fastest-growing publishing category. Which is why we were only a little surprised to see the tremendous response that came in for this summer's Best-Ever Teen Fiction poll. Integrating Technology In The Classroom: 24 EdTech Tools And 5 Benefits Of Educational Technology Integration There are many ways of integrating technology in the classroom; ways that do not directly involve the use of computers. Some of the traditional classroom tools have found equivalent technology tools. Schools or teachers that have adopted or replaced traditional classroom tools with equivalent technology tools are seen to be teaching with edTech tools. Whiteboard Tools

Smartphones in the classroom: a teacher's dream or nightmare? When students return to class this fall, a majority of them will be toting something that teachers themselves are still learning to deal with: a mobile device. Whether it's a smartphone, tablet or laptop, survey after survey shows more and more — and younger and younger — schoolchildren have their own computing devices and are taking them to class. A report last year found that just among Grade 4 students, 25 per cent had a cellphone; for high school students, close to 90 per cent have smartphones. School districts once tried to fight the trend. The Toronto District School Board, Canada's largest, banned cellphone use in class from 2007 to 2011.

24 Best Poems to Teach in Middle and High School It can be hard to know which poems will spur your middle and high schoolers into deep, meaningful discussion and which will leave them, ahem, yawning. So we asked experienced teachers to share their favorites—the punch-in-the-gut poems that always get a reaction, even from teens. Here's what they had to say. 11 Simple Ways To Start Using Technology In Your Classroom Via Edudemic If you’re on the education technology fence, you probably can’t decide which device or app is the best one to really use. You aren’t sure if you want to jump into the edtech pool with Evernote, Moodle, an iPad, a Chromebook, or some other hot new product or service.

7 accessibility features every teacher should know for back to school. It’s that time of the year again. The supplies and textbooks have come in. The room is decorated. Soon students will be walking through the door and it’s off the races. Gender roles discussion and information gap - ESL speaking activity The main focus of this class would be the discussion questions. With my advanced learners I find that this might take up to 2 hours of class time so I typically split the questions over two classes. I don't want students getting bored with the topic so i don't make them do the questions all at once.

ALiEM Where is the pedagogy in flipped classrooms? Flipped Classroom Model Flipped classrooms can be generally thought of as a teaching approach where learners are first exposed to new content before class on their own and then process the information in a facilitated, group setting during class. Dr. Robert Cooney (@EMEducation) discussed in a blog post at iTeachEM his experience with flipping the classroom. In his blog post he writes about the pioneers of this model Eric Mazur (@Eric_Mazur), a Harvard physics professor, and Jon Bergmann (@jonbergmann) and Aaron Sams both high school teachers.

Anti-socially mobile? What I really think about classroom tech Tom Bennett reflects on the Great Tech Debate of 2015 This may shock you, but I don’t think mobile phones should be banned from school. Or iPads from the classroom. It won’t shock you if you have the wit to read entire articles rather than headlines, or the wisdom to triangulate your sources before swallowing a story entire. Podcast: Gender Roles Podcast: Gender Roles Whose job is it to take out the trash in your family? Is there such a thing as “pink jobs” and “blue jobs”?