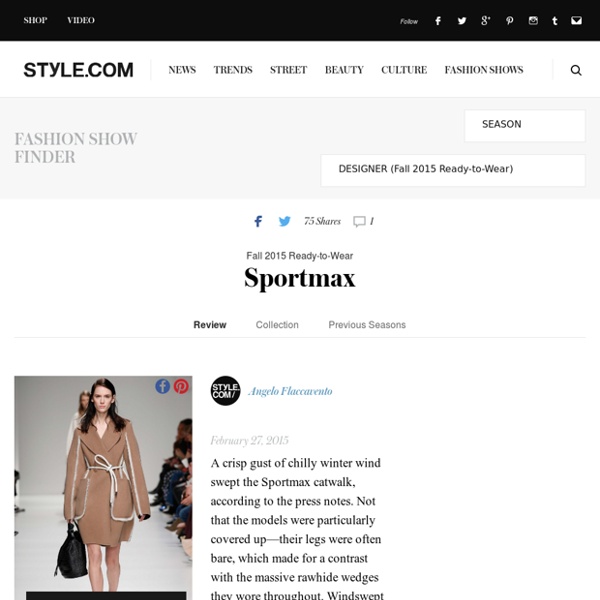 sportmax The Economist explains: China's addiction to luxury goods ASK any luxury retailer where their most valuable customers are from and most will say China. The post-2008 years have not been the easiest for luxury brands, but China's apparently unquenchable thirst for all things bling has made up for the slowing down of European consumption. By some estimates, half of the world’s luxury spending will come from Chinese wallets by next year. The Chinese only recently started making enough money to splurge. The main reason why they buy abroad is price. The slowing Chinese economy and an official crackdown on corruption and lavish gifting has tempered the luxury market after years of double-digit growth. Transgender Models Strike A Pose In New Barneys Ads, Catalogs: PHOTOSNewNowNext by Eric Shorey 1/30/2014 Valentijn (on left) wears Giorgio Armani. Ryley (center) wears Armani Collezioni. Leonard and Gloria wear their own clothes. Photo © Bruce Weber. Barneys has taken a progressive step forward with its new ad campaign and catalogs: Shot by legendary photographer Bruce Weber, “Brothers, Sisters, Sons & Daughters“ features some 17 trans men and women sporting high-end fashion available at the luxe retailer “I was exquisitely aware that in the last decade, the [lesbian, gay and bi] communities have made extraordinary advances, and the transgender community has not shared in that progress,” Barneys marketing exec Dennis Freedman, formerly the creative director of W magazine, told the New York Times. The models are depicted interacting with family members and loved ones (while still looking devastatingly gorgeous) and their personal stories are being shared on a Barney’s mini-site, The Window. View some images from the “Brothers Sisters, Sons and Daughters” campaign below.

Luxury Fashion - over 170 Top Designers Discover mytheresa.com, the epicentre of runway highlights and exclusive seasonal offerings from New York, London, Paris and Milan’s luxury fashion designers. The mytheresa edit features clothing, bags, shoes and accessories from more than 170 international luxury designer brands such as Balenciaga, Burberry, Alexander McQueen, Diane von Furstenberg, Saint Laurent, and Christian Louboutin, as well as key pieces from on-trend labels like Acne Studios, Isabel Marant, Mulberry, Roger Vivier, Proenza Schouler, By Malene Birger, plus many more. The mytheresa.com fashion and designer clothing website is updated with a total of over 500 new arrivals a week from the latest collections, cementing it as the heartbeat of today’s fashion trends. A Unique Shopping Experience More than 170 of the world’s hottest designers 500 New Arrivals a week from the latest runway collections Exclusive womenswear fashion Weekly editorials, presenting the newest trends and style inspiration Service and Quality

Is Luxury Branding Bad for Society? Surprise! Research shows exposure to luxury brands make us more selfish.New research, reported in The New York Times this week (and elsewhere earlier), corroborates what all of us driving Hondas have always told ourselves: that guy in the BMW actually is a jerk. Well, at least he (and males were significantly worse than females) and other drivers of Porsche, Mercedes, etcetera are more like to blow through a pedestrian-prioritized crosswalk than non-luxury car drivers, according to this survey, which is summarized in the video below. We May Be Inherently Selfish, but Luxury Brands Make Us More SoSo, is this just a facet of my-wallet-is-bigger-than-your-wallet male psychology, or do luxury brands exacerbate our less socially positive and more self-aggrandizing tendencies? Harvard Study Says The Devil May Actually Wear PradaA 2009 study out of Harvard Business School offers these bracing insights So What’s A Luxury Brand to Do?

Chanel vs. Chanel: Coco's Brand Steps Off the Runway and Into the Courtroom Chanel is ubiquitous—on the runway each fashion week, in its boutiques lining Fifth Avenue and Rodeo Drive, and now in the courtroom as it seeks to uphold its trademark rights against a little-known salon and spa in Indiana. Merrillville, Indiana, to be precise. According to papers filed in the US District Court in Hammond, Indiana, Chanel Inc. has filed a trademark infringement action against Chanel’s Salon, arguing that the salon is benefiting from an association with the chi-chi brand’s reputation. The fame of the Chanel trademark is hardly disputable, a factor weighing in the luxury brand’s favor. The court will also consider that Chanel’s Salon is owned by Chanel Jones, and therefore, it would seem that her use is not intended to be adverse to the label started by designer Coco Chanel. Unfortunately for Ms. It might be hard for a Mrs. It is in Chanel Inc.’s best interest to take on a case against Jones.

Why Fashion Week Is Important, And How It Could Be Better - NYFW Spring 2014 This New York Fashion Week went off with the usual highs, lows and PR drama, but it started on an unhappy tone. Fern Mallis, the former doyenne of Fashion Week at Bryant Park, along with other fashion world insiders, took to the New York Times the day before shows to rain on the NYFW parade before it had even begun. Over grumbles about the media circus, packed schedule and commercialization of the event, people are asking: What is the true value of New York Fashion Week? Photo by Driely S. "[NYFW] is a nice celebration of the industry and all of the art that goes into it, the creative minds and the talented craftsmen," Whitney Pozgay, the designer behind contemporary line WHIT, told Racked. Pozgay sought to differentiate herself this season by putting on a breakfast instead of a show. The Whit presentation. These types of moves, in the face of a continuously growing calendar, don't surprise seasoned fashion editors. It's a sentiment that many attendees can agree upon.

Market turmoil hitting luxury brands - Business Insider REUTERS/Hannibal HanschkeA member of People for the Ethical Treatment of Animals (PETA) covered with artificial blood, stands on fur during a protest against the use of fur in front of a boutique of luxury goods company Burberry in Berlin April 12, 2007. Nothing is going quite right for the world's major luxury goods brands at the moment. The market tumult that began in China and ripped through Europe and the Americas is particularly bad for some companies, and there's no question that major producers of fashion items, watches and jewellery are among them. A HSBC note released on Wednesday gives the main reasons for that, explaining why stock prices for these major brands have been even weaker over the past month than other big listed companies. A chart from the research note shows that altogether, major luxury stocks are actually in a bear market — taken from their various highs over the course of 2015 so far they're down 22.4% today. Here's how it looks: Investing.com, Business Insider

Christian Louboutin: The World’s Most Fabulous Shoes, Channel 4 - TV review - Reviews - TV & Radio - The Independent These objects of desire are not designed with commerce or comfort in mind, but they are supposed to make the wearer happy. Louboutin revealed that a picture of Princess Diana looking sadly at her feet was the inspiration for the very first pair of shoes he designed under his own name. “It would be nice to have something to make her smile, when she looked at her feet.” Luckily, you didn’t have to be overawed by Louboutin’s creative process to find this year-in-the-life snapshot amusing. Toast of London’s Tracy-Ann Oberman delivered the need-to-know info in a voiceover as arch as the angle of those famous red soles: he goes everywhere on a Vespa accompanied by Safquat, his Bangladeshi butler. His close, personal friends include Catherine Deneuve, Kylie Minogue and the Queen of Bhutan. Not that Louboutin’s customers are complaining.

jeremy scott’s cyborg club girls were a 60s sci-fi dream Bouncing down the runway to the ecstatic sounds of The B-52s, the wigs at Jeremy Scott's spring/summer 16 show yesterday looked animatronic. A tonged blond sex kitten do bobbed up and down against Gigi Hadid's golden shoulders as she opened the show in a candy-coloured vinyl halter top and mini skirt. Her lips were painted Palm Beach coral and IRL Barbie girl Paris Hilton smiled approvingly in the front row. Jeremy Scott is making his cinematic debut tonight in New York, as the star of Jeremy Scott: The People's Designer, a new documentary that follows his life from the studio to SoulCycle. Soon after Gigi came Soo Joo Park, strutting in a silver metallic rain slicker with a purple jacquard spider print and luminous neon green doorknocker earrings. The late-60s, early-70s references told a story about nostalgia. Didn't it also look a little Lady Miss Kier? Part of making something new was a collaboration with Brazilian jelly-shoe brand Melissa (how had this not happened before?).