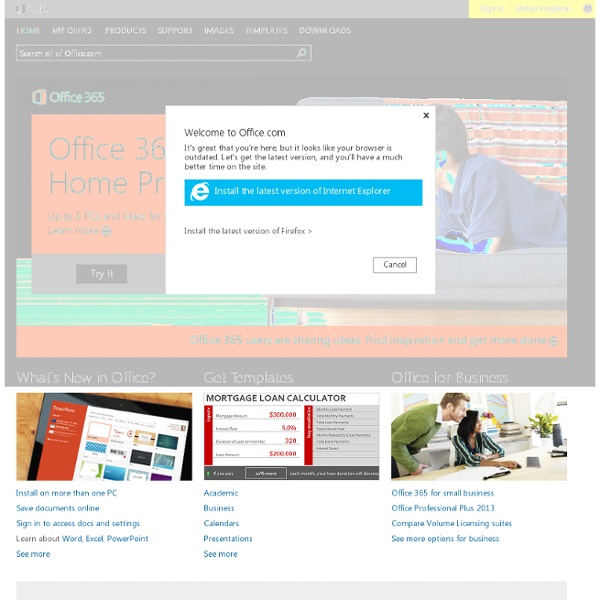 Best free and legal music download sites The Internet has made it easy to get a free download of just about any song you want. The problem, however, is that free music isn’t always legal music. If you’re the honest type and you like to pay for your tunes and support the artists, labels, and retailers who distribute them, then illegal downloading simply isn’t an option. Web Screenshots - Take a Screen Capture Online This tool will help you capture a screenshot image of any public web page with a click. You don't need any software or browser extensions to capture the image of any web page. And it works with lengthy web pages too that extend below the fold. To get started, simply paste the URL of the web page in the input box and hit the "Screen Capture" button.

The 20 best tools for online collaboration A team of designers does not always work in the same office; you work in distributed groups, some of you may be working from home, and clients can be based all over the world. This is where collaboration tools come in - they make it easier and faster for designers to get feedback and approve artwork in a professional manner, and they come in all sort of forms, from free Android apps to Chrome extensions. Some are created specifically for designers, some serve as a concept crafting whiteboard often with tools to make simple annotations, and some are all-in-one web apps that include an element of project management. Here we gather together some of the best available online tools to allow designers to take part in collaborational work in real time.

Free Audio Books Sort by Titles Per Page 1 - 10 of 11136 Titles by Dale Carnegie Available on:Audio Download RSS Feed Search Engine Instant RSS Search engine will help you discover RSS feeds on the web around your favorite topics. You may use the tool to search RSS feeds for blogs, news websites, podcasts and more. It is instant search and hence the search results display as you type. You may use any of the Google search operators - like allintitle, inurl, etc. - for more accurate results. You can subscribe to the feeds in your favorite RSS Reader (like Feedly) or use the Preview link to see the 10 most recently published articles from that feed. US changes nuclear strategy to first strike: Analyst A US-made nuclear weapon (file photo) The United States has changed its military doctrine in favor of using nuclear weapons for preemptive purposes, an analyst writes for Press TV. “US war doctrine has been changed. US nuclear weapons are no longer restricted to a retaliatory force, but have been elevated to the role of preemptive nuclear attack,” Paul Craig Roberts wrote in a column for Press TV website.

Start Developing iOS Apps Today: Where to Go from Here Taking the ToDoList App to the Next Level The to-do list app you just created benefits from numerous built-in behaviors. You can continue to experiment with this app to enhance your understanding, or you can start something new. If you do continue with the to-do list app, here are some areas to investigate: Your to-do list disappears when you quit and relaunch the app.

Survival Gardening And a Way to Relax and De-Stress Survival gardening can be fun, relaxing and actually quite simple… Many people seem to think they don’t have enough space for a garden but the areas where you can learn how to grow a basic vegetable garden are endless. Music Discovery Project Upload Disco Loading... CIA and FBI Work with Fascists in Ukraine as ‘War in Europe’ Unfolds ‘Andriy Parubiy, the National Security and Defense Council boss of the junta in Kyiv, announced on Sunday the Ukrainian military will expand the “active stage of the operation in towns where extremists and terrorists are carrying out illegal activities.” The renewed effort to assert control and defeat anti-junta activists and paramilitaries in Donetsk, Sloviansk, Kramatorsk, Kostyantynivk and other towns in eastern Ukraine coincides with news the CIA and FBI will work with the regime to put down popular uprisings against the government in Kyiv. On Monday, coup Interior Minister Arsen Avakov said the failure of police in Odessa, where violence claimed the lives of dozens of people over the last few days, has resulted in the formation of “Kiev-1,” a paramilitary comprised of “civil activists” who previously worked with the fascist Right Sector and Svoboda to overthrow Ukraine’s elected president in February.’