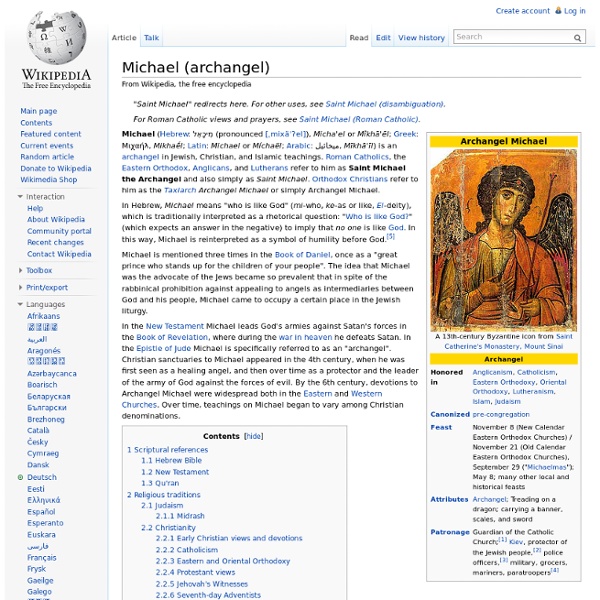 Michael ("who is like God?", Hebrew: מִיכָאֵל‎ (pronounced [mixåˈʔel]), Micha'el or Mîkhā'ēl; Greek: Μιχαήλ, Mikhaḗl; Latin: Michael (in the Vulgate Michahel); Arabic: ميخائيل‎, Mīkhā'īl) is an archangel in Jewish, Christian, and Islamic teachings. Roman Catholics, the Eastern Orthodox, Anglicans, and Lutherans refer to him as "Saint Michael the Archangel" and also as "Saint Michael". Michael is mentioned three times in the Book of Daniel, once as a "great prince who stands up for the children of your people". In the New Testament Michael leads God's armies against Satan's forces in the Book of Revelation, where during the war in heaven he defeats Satan. "At that time Michael, the great prince who protects your people, will arise." In view of this, Michael is seen as playing an important role as the protector of Israel, and later of the Christian Church. "...there was war in heaven. "Michael the archangel, when contending with the devil he disputed about the body of Moses"

Gabriel In Abrahamic religions, Gabriel (Hebrew: גַּבְרִיאֵל, Modern Gavri'el Tiberian Gaḇrîʼēl, God is my strength; Arabic: جبريل, Jibrīl or جبرائيل Jibrāʾīl) is an angel who typically serves as a messenger sent from God to certain people. In Islam, Gabriel (Jibra'il) is considered one of the four archangels whom God sent with his divine message to various prophets, including Muhammad.[6] The 96th chapter of the Quran, sura Al-Alaq, is believed by Muslims to be the first surah revealed by Gabriel to Muhammad. Judaism[edit] Gabriel is interpreted by the Rabbanim to be the "man in linen" in the Book of Daniel and the Book of Ezekiel. In Kabbalah, Gabriel is identified with the sephirot of Yesod. Intertestamental literature[edit] The intertestamental period (roughly 200 BCE – 50 CE) produced a wealth of literature, much of it having an apocalyptic orientation. Christianity[edit] New Testament[edit] Gabriel only appears by name in those two passages in Luke. Gabriel's horn[edit] Feast days[edit]

Sariel Sariel (Aramaic: זהריאל, Greek: ‘Ατριήλ, 'Command of God') is one of the archangels mainly from Judaic tradition. Other possible versions of his name are Suriel, Suriyel (in some Dead Sea Scrolls translations), Esdreel, Sahariel, Juriel, Seriel, Sauriel, Surya, Saraqael, Sarakiel, Jariel, Suruel, Surufel and Sourial. Like Metatron, Suriel is a prince of presence and like Raphael, an angel of healing. He is also a benevolent angel of death (one of a few). Suriel was sent to retrieve the soul of Moses. It is said that Moses received all his knowledge from Suriel, (although Zazagel is credited also with giving Moses his knowledge). In traditional texts[edit] History[edit] The angel Suriyel is briefly mentioned in the Conflict of Adam and Eve with Satan as bearing Adam and Eve from the top of a high mountain to the Cave of Treasures.[5] "… bring what he had brought, and give it to Adam. In the Talmud he is said to have taught Rabbi Ishmael ben Elisha hygiene. Speculation[edit] References[edit]

Archangel An archangel /ˌɑrkˈeɪndʒəl/ is an angel of high rank. Beings similar to archangels are found in a number of religious traditions; but the word "archangel" itself is usually associated with the Abrahamic religions of Judaism, Christianity, and Islam. Some branches of the faiths mentioned have identified a group of seven Archangels, but the actual angels vary, depending on the source. In Judaism[edit] There are no explicit references to archangels in the canonical texts of the Hebrew Bible (Old Testament). In Christianity[edit] Guido Reni's Archangel Michael Trampling Satan, 1636. The New Testament speaks frequently of angels (for example, angels giving messages to Mary, Joseph, and the shepherds; angels ministering to Christ after his temptation in the wilderness, an angel visiting Christ in his agony, angels at the tomb of the risen Christ, the angels who liberate the Apostles Peter and Paul from prison); however, it uses the word "archangel" only twice. Roman Catholic[edit]

Raphael (archangel) Raphael (Standard Hebrew רָפָאֵל, Rāfāʾēl, "It is God who heals", "God Heals", "God, Please Heal") is an archangel of Judaism and Christianity, who in the Judeo-Christian tradition performs all manners of healing. In Islam, Raphael is the same as Israfil. Raphael is mentioned in the Book of Tobit, which is accepted as canonical by Catholics, Orthodox, and some Anglo-Catholics, and as useful for public teaching by Lutherans and Anglicans. The angels mentioned in the Torah, the older books of the Hebrew Bible, are without names. Raphael is named in several Jewish apocryphal books (see below). Raphael bound Azazel under a desert called Dudael according to Enoch 10:4–6: And again the Lord said to Raphael: 'Bind Azazel hand and foot, and cast him into the darkness: and make an opening in the desert, which is in Dudael, and cast him therein. Tobias and the Angel The name of the angel Raphael appears only in the Deuterocanonical Book of Tobit. Raphael, Palazzo Ducale particolare