The Graphs of Sine and Cosine 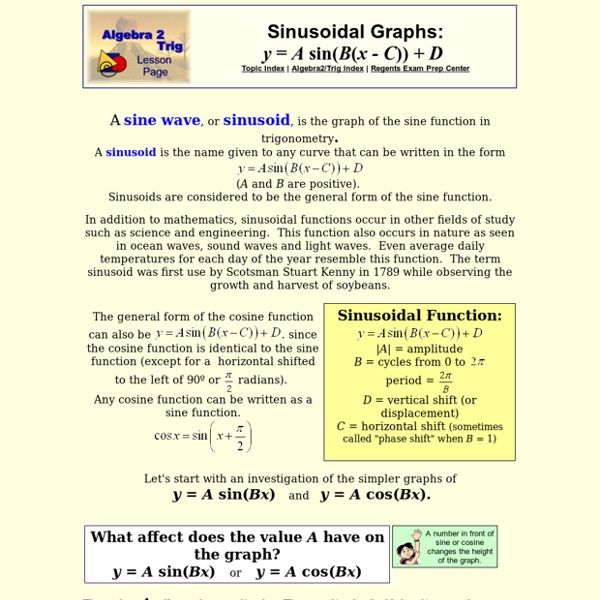 4. Graphs of tan, cot, sec and csc by M. Bourne The graphs of tanx, cotx, secx and cscx are not as common as the sine and cosine curves that we met earlier in this chapter. However, they do occur in engineering and science problems. They are interesting curves because they have discontinuities. For certain values of x, the tangent, cotangent, secant and cosecant curves are not defined, and so there is a gap in the curve. How to Change the Amplitude, Period, and Position of a Tangent or Cotangent Graph You can transform the graph for tangent and cotangent vertically, change the period, shift the graph horizontally, or shift it vertically. However, you should take each transformation one step at a time. For example, to graph follow these steps: Sketch the parent graph for tangent.

1. Graphs of y = a sin x and y = a cos x by M. Bourne The Sine Curve y = a sin t The sine curve occurs naturally when we are examining waves. When waves have more energy, they go up and down more vigorously. Trigonometric Equations Remember to first solve for the trig function and then solve for the angle value. Solution: If there is more than one trig function in the equation, identities are needed to reduce the equation to a single function for solving.

Graphing Trigonometric Functions Graphing Trigonometric Functions (page 1 of 3) Sections: Introduction, Examples with amplitude and vertical shift, Example with phase shift You've already learned the basic trig graphs. But just as you could make the basic quadratic x2, more complicated, such as –(x + 5)2 – 3, so also trig graphs can be made more complicated. We can transform and translate trig functions, just like you transformed and translated other functions in algebra. Let's start with the basic sine function, f(t) = sin(t).

Amplitude and Period Amplitude and Period Learning Objective(s) · Understand amplitude and period. · Graph the sine function with changes in amplitude and period. · Graph the cosine function with changes in amplitude and period. · Match a sine or cosine function to its graph and vice versa. Solving Trigonometric Equations Solving Trigonometric Equations (page 1 of 2) Solving trig equations use both the reference angles you've memorized and a lot of the algebra you've learned. Be prepared to need to think! Lesson HOW TO - Solve Trigonometric equations Introduction The solution of trigonometric equations is one topic that students have particular problems with. There are a few reasons for this: 1. there is usually a simplify part first that requires use of some TRIG identities. 2. there is the use of RADIANS rather than degrees, for which some students are not at ease with. 3. there is the repetitive aspect of TRIG functions that students find bewildering. All in all, a potentially daunting topic. To be honest though, there is nothing that you need fear here, so long as you take it methodically and slowly. Also, you have to understand what it is you are doing.