Your Guide to Good Journalism 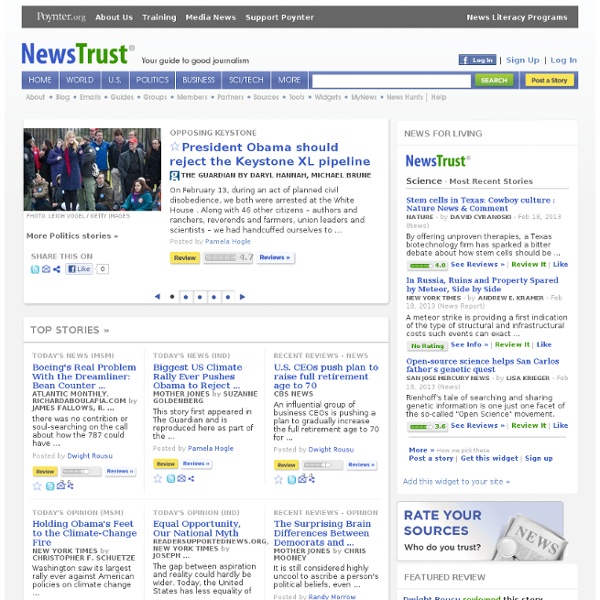 A Machine That Collects Tax From Prostitutes In Bonn, Germany, where prostitution is legal, hookers pay a “prostitution tax” to a ticket machine in order to have sex for monies. The fee is €6 (or $7.80) and shoots out a receipt to make the occupation official. The machines were just installed and is very similar to the ones you see these days that take parking money. Over the first weekend, the machines collected $US382 worth of taxes. That’s, um, a lot of work right there.

SourceWatch Koch Spy Agency Led by Voter Fraud Huckster The Kochs have been complaining about a "lack of civility in politics" as they seek to boost their public image--but one of their top operatives helped propel perhaps the most egregious case of race-baiting voter fraud hucksterism in recent years. At the same time that the Kochs have been on a PR blitz, publicly spinning an image of themselves as well-intentioned patriots trying to make the world a better place and decrying "character assassination," they've been quietly ramping up a clandestine surveillance and intelligence gathering operation focused on their perceived political enemies, Ken Vogel reports at Politico. At the helm of this "competitive intelligence" operation is a man named Mike Roman, Vice President of Research for Kochs' Freedom Partners and who was paid $265,000 last year, according to Freedom Partners' recent tax filing. Read the rest of this item here. Wisconsinites Reject the "Eric O'Keefe Session" of the Legislature

Imagining White House 2.0 - 3dna This is the full-text of my "Imagining White House 2.0" presentation for the Personal Democracy Forum conference. that was just one of the marijuana questions that ranked highly on all three of obama's online forums. much of the dialogue since then has been about how to prevent this "gaming" of the system. well, gaming the system is nothing new. it's been happening for decades. they're called lobbyists. pundits. 501c4s. political consultants. campaign ads. Google - Cached link When you click Cached, you'll see the webpage as it looked when Google last visited the page. About Cached Links Google crawls the web and takes snapshots of each page as a backup in case the current page is not available. These pages then become part of Google’s “cache.” If you click on a link that says Cached, you’ll see the previous version of the site that we have stored. Where to find Cached Links

Transportation We are wondering why it is that car manufacturers are tripping over each other inventing boring and redundant “super modern” and “high design” cars, when the end result is a sea of lookalikes. One can no longer recognize a “premium” make from a lower-end car, certainly not by distinctive and recognizable design features. They are unimaginative, uninspiring and suffer from a serious case of follow-itis. As opposed to being leaders and, in particular, design leaders. Fourteen Propaganda Techniques Fox "News" Uses to Brainwash Americans There is nothing more sacred to the maintenance of democracy than a free press. Access to comprehensive, accurate and quality information is essential to the manifestation of Socratic citizenship - the society characterized by a civically engaged, well-informed and socially invested populace. Thus, to the degree that access to quality information is willfully or unintentionally obstructed, democracy itself is degraded. It is ironic that in the era of 24-hour cable news networks and "reality" programming, the news-to-fluff ratio and overall veracity of information has declined precipitously. Take the fact Americans now spend on average about 50 hours a week using various forms of media, while at the same time cultural literacy levels hover just above the gutter. My curiosity about this question compelled me to sit down and document the most oft-used methods by which willful ignorance has been turned into dogma by Fox News and other propagandists disguised as media.

Weekly Natural Gas Storage Report Summary Working gas in storage was 826 Bcf as of Friday, April 4, 2014, according to EIA estimates. This represents a net increase of 4 Bcf from the previous week. Reuters Photo Fraud The Reuters Photo Scandal A Taxonomy of Fraud A comprehensive overview of the four types of photo fraud committed by Reuters, August, 2006 The recent discovery that the Reuters news agency released a digitally manipulated photograph as an authentic image of the bombing in Beirut has drawn attention to the important topic of bias in the media.

Places Macyâs Thanksgiving Day Parade 2010 For 80 years, Macyâs Thanksgiving Day Parade has kicked off the holiday season with glorious bands, balloons and floats. Itâs theatre of operations is New York City and the parade is watched by an estimated … Top Sports moments in Pictures of 2010 The sports year is coming to an end like a calendar year so we handpicked for you the best sports moments of 2010.

Is this plagiarism? A new web extension can help answer that question Suspicious about the origins of an article you’re reading online? A new browser extension and website, Churnalism U.S., claims to help detect plagiarism by comparing web content to Wikipedia and a database of press releases. Churnalism was built by the Sunlight Foundation, a Washington, DC-based nonprofit that aims to make government more transparent and accountable, and Media Standards Trust, a U.K.-based nonprofit that advocates for transparency in news. The organizations previously created a U.K. version of Churnalism that compares web content to articles from the U.K. national press and the BBC. “Here at Sunlight, we’re increasingly interested in tracking not just the flow of money in politics, but the flow of ideas, whether in legislation or floor speeches or news articles,” Sunlight Labs director Tom Lee said in a statement.

Google office Today, Google employs 20,223 people around the world, receiving a resume every 25 seconds from eager job-seekers, hiring an average of nine new employees a day. Its headquarters, often referred to as the Googleplex, is located in Mountain View, California. It runs thousands of servers across the world, processing millions of search requests each day and about one petabyte of user-generated data each hour. Exercise Google has its own state-of-the-art gym . . . offering weight-training and a host of exercise machines, rowing machines, lockers and shower rooms, and two swim-in-place wave pools. Other perks include free haircuts, dry cleaning and laundry, child care, car services, chiropractors and five on site doctors available for employee check-ups; all free of charge.