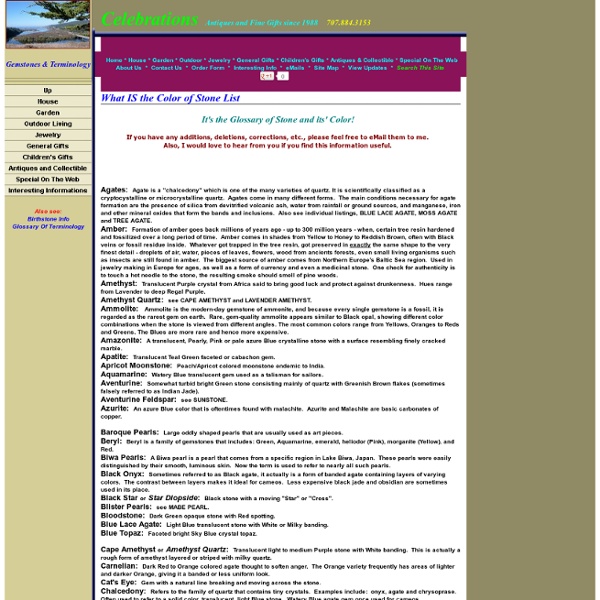 Carnelian Meanings and Uses The Crystal Vaults Comprehensive Illustrated Guide to Crystals Your On-Line Guide to The Healing Energies, Metaphysical Properties, Legendary Uses and Meaning of Introduction to the Meaning and Uses of Carnelian Like the unexpected fire of a sunset, or the first flash of autumn brilliance, Carnelian captivates. A glassy, translucent stone, Carnelian is an orange-colored variety of Chalcedony, a mineral of the Quartz family. In antiquity, as well as today, Carnelian is believed to help timid speakers become both eloquent and bold. The ancient Egyptians called Carnelian "the setting sun." Carnelian Uses and Purposes - Overview Orange stones, especially the carnelians, are excellent aids for training, coordination of physical exercise programs, and for balancing body energy levels. Carnelian is said to attract prosperity, new resources and good luck. Carnelian clarifies the voice. Carnelian is traditionally known to guard against falling masonry and accidents with tools. Carnelian Healing Energy

Society for Psychical Research From the publisher’s website: For thousands of years, voyagers of inner space—spiritual seekers, shamans and mystics—have returned from their inner travels reporting another level of reality that is more real than the one we inhabit in waking life. Others have claimed that under the influence of mysterious substances, known as entheogens, the everyday human mind can be given glimpses of this multidimensional realm of existence. Using information from the cutting edge of modern science, Peake presents a startling new hypothesis that these “inner worlds” are as real, or possibly even more real, than the “reality” we experience in waking life. As his starting point, Peake examines the widespread historical belief that the mid-brain’s pine-cone shaped pineal gland activates the “third eye” described by mystics and seers.

Wicca for the Beginner First, who we are not: we are not Satanists. We do not worship the devil. In fact, we don’t even have a devil. We are not all women, though it may be that the majority of witches are women—this from millennium of disempowerment by the male dominated Judeo-Christian tradition. We are not evil. Really, that pretty much describes us: witches are just ordinary people who use the Powers to enjoy a good life. There is no such thing as a black witch, no matter what the color of their skin. Ever mind the Rule of Three Three time what thou givest returns to thee This lesson well, thou must learn, Thee only gets what thou dost earn! Seriously, we are not dour folks. The Ways of Wicca can be divided into two acts: Magic and Devotion. In short, devotion involves a sort of union with the Powers of the Universe. If you can’t get this to work for you, don’t worry. What about Goddesses and Gods? I think you will soon find that honoring or invoking them is important to your quest. so may it be Reni

What is Hematite? Use of Hematite in Healing, Feng Shui and Jewelry => What is A Crystal? Even though often called a crystal (especially in feng shui circles), hematite is not a crystal, but a mineral (iron oxide). While many stones can look similar to an untrained eye, the heavy and shiny hematite has a distinctive presence that cannot be confused with any other stone. The name hematite derives it meaning from the greek word for blood. The reason for the origin of hematite's name can be twofold. Because hematite has been used for such a long time, it has a wide variety of healing properties ascribed to it, from relieving leg cramps to alleviating fevers. Hematite clearly has a very strong grounding energy; you can feel that just by holding the stone in your hand. Most of the hematite sold on the market comes from Brazil, Venezuela, US and Canada. In feng shui, hematite is used for its grounding, calming, as well as protective properties. The form will depends on what you want to use the hematite for. Do you have a feng shui question?

EZ Chakra Spin This meditation only takes a few minutes, and can be done at any time when you are able to tune in and focus. It is easy to do and can take the place of a full or extended meditation for people who lack the necessary privacy and/or are short on time. Turn your attention to the base of your spine and visualize your base chakra as a vortex [like a small pyramid]. Visualize this chakra a rich vibrant red and spin it. Keep spinning it until it spins fast and on its own. Work your way up through each chakra, visualizing each one and spinning it until it spins fast and on its own. When you spin the 6th chakra, focus *behind* your 3rd eye, in the middle of your head. Each of your chakras should be a powerful vibrant color. When our chakras spin at a faster rate, this helps to protect us from misfortune and disease, opens us to the astral, and protects us astrally as well as in the physical world. Also, note that the soul is made of light.

Welcome to The Church and School of Wicca's Homepage! Citrine: Healing and Feng Shui Energy of the Citrine Crystal Citrine is a controversial crystal. Most of the citrine on the market is actually heat treated amethyst, so when you buy a citrine tumbled stone or a citrine point are you are probably buying a treated amethyst. It is not easy to recognize genuine citrine, but it is relatively easy to see if the so-called citrine is a modified amethyst. Is the colour of the citrine you are looking at is a deep, burnt orange-yellow, then maybe keep looking for more sources to find citrine. A genuine citrine is actually of a gentle yellow colour, and it is relatively rare. Citrine contains a solar quality of energy, this is why it is traditionally considered a good healing crystal for the solar plexus/third chakra issues. Throughout history and in many cultures citrine was known as the merchant's stone. Most of the genuine citrine comes from Brazil, US and Russia. The money and abundance area (Southeast if you follow the classical feng shui bagua) is the best area to place your citrine.

Directing Energy from Azazel Directing Energyfrom Azazel To make full use of your abilities in magick, it is important to be familiar with energy; sensing it, how to absorb it, detect it, send it out and manipulate it. This comes with meditating, sensitizing yourself to it and working with it. With consistent practice, power meditation will naturally increase your bioelectricity. 1. 2. 3. 4. 5. 6. 7. 8. 9. This is an excellent exercise for directing energy at will. It is very important to always direct your energy upwards and out of your crown chakra.

Freemasonry Freemasonry is a fraternal organisation that traces its origins to the local fraternities of stonemasons, which from the end of the fourteenth century regulated the qualifications of masons and their interaction with authorities and clients. The degrees of freemasonry, its gradal system, retain the three grades of medieval craft guilds, those of Apprentice, journeyman or fellow (now called Fellowcraft), and Master Mason. These are the degrees offered by craft, or blue lodge Freemasonry. There are additional degrees, which vary with locality and jurisdiction, and are now administered by different bodies than the craft degrees. The basic, local organisational unit of Freemasonry is the lodge. Masonic Lodge Palazzo Roffia, Lodge in Italy set out for French (Moderns) ritual The Masonic Lodge is the basic organisational unit of Freemasonry. The bulk of Masonic ritual consists of degree ceremonies. There is very little consistency in Freemasonry. Ritual and symbolism Organisations of lodges

How to Clean Your Aura How to Clean Your Aura Cleaning your aura is essential for spiritual hygiene. By cleaning your aura on a daily basis, you protect yourself against psychic attacks and illnesses. Ideally, one should clean the aura twice a day- upon awaking and before falling asleep at night. 1. That’s all there is to it, for a short working. TO FULLY CLEAN YOUR AURA, recite a Satanic rosary, with the seed mantra for the Sun, while visualizing yourself engulfed in brilliant white-gold light. Vibration is much more effective in cleaning the aura. Quite often, if there is a problem, such as illness or if there is a lot of negative energy, one will have difficulty in visualizing the light. Contrary to many teachings, Satan/Lucifer is the bringer of light. "Light is Power" --Lilith

Chakra Alignment Chakra Alignment I want to make something very clear here. For any non-Satanists who visit this page, whether you are so-called "New Age" "Mystics" or whatever, if you proceed to read on, NEVER FORGET- THIS KNOWLEDGE CAME FROM SATAN AND THE EGYPTIAN GOD, THOTH. Thoth is with the Powers of Hell. As with all spiritual knowledge, the cross has been hideously corrupted by Christianity. The equal armed cross represents the four corners/quarters and directions, such as when we summon the Four Crowned Princes of Hell during ritual. "...seven towers - the Towers of Satan [Ziarahs] -six of them trapezoidal in form, and one, the "center" on Mount Lalesh, shaped like a sharp, fluted point." -- The Satanic Rituals by Anton LaVey The above excerpt is also an allegory, as the center is the odd one out, the heart chakra. All one needs to do is to turn the solar 666 chakra so the point [bindu] is facing DOWN. Now, popular writings tout the heart chakra as the 'seat of emotions.'

witch By Doreen Valiente Hear now the words of the witches, The secrets we hid in the night, When dark was our destiny’s pathway, That now we bring forth into the light. Mysterious water and fire, The earth and the wide-ranging air. By hidden quintessence we know them, And will and keep silent and dare. The birth and rebirth of all nature, The passing of winter and spring, We share with the life universal, Rejoice in the magickal ring. Four times in the year the Great Sabbat Returns, And the witches are seen, At Lammas and Candlemass dancing, On May Even and old Hallowe’en. When day-time and night-time are equal, When sun is at greatest and least, The four Lesser Sabbats are summoned, Again witches gather in feast. Thirteen silver moons in a year are, Thirteen is the coven’s array, Thirteen times at esbat make merry, For each golden year and a day. The power was passed down the ages, Each time between woman and man, Each century unto the other, Ere time and the ages began. The Witches' Rune