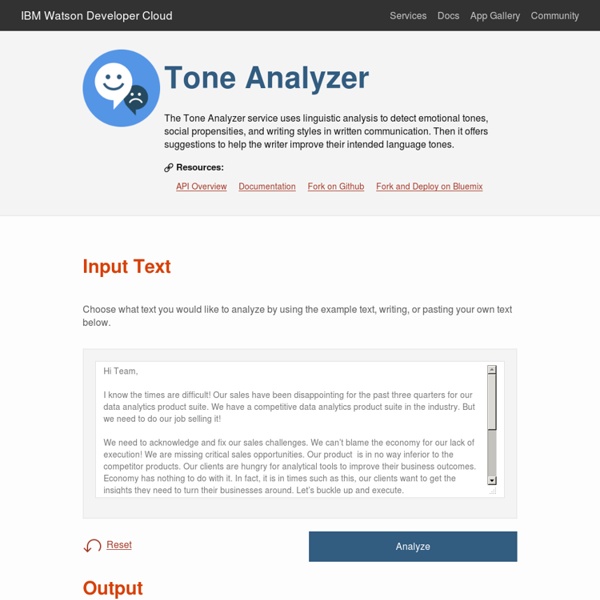 Word's to Describe Tone, Attitude, and Mood - Vocabulary List accusatory expressing the assignment of blame or guiltDiamond started to fight back, pointing an accusatory finger at the Bank of England. apathetic showing little or no emotion or animationHe also missed his first five field goal attempts and appeared apathetic about attacking the basket. awe an overwhelming feeling of wonder or admirationHis words, filled with awe, help illustrate how far he has journeyed. bitter expressive of severe grief or regretMaybe he is bitter about being nominated and not winning?

IBM Snags Clearleap Video Service As It Continues To Pick Off Strategic Cloud Properties This morning IBM announced it was acquiring Clearleap, a company that gives it enterprise-grade video content management services in the cloud, and which adds another layer to its burgeoning cloud strategy. IBM would not disclose the purchase price. Clearleap, whose customers include HBO, The History Channel, Time Warner Cable and Verizon (the parent company of TechCrunch) provides customers with multi-screen video processing and video asset management — and perhaps most importantly the ability to expose these features and functions as open APIs on IBM’s Bluemix Platform as a Service. IBM has been thinking about video for some time and sees it as an increasingly important content type, says Jim Comfort, general manager of cloud services at IBM. “Video will represent 65 percent of Internet traffic going forward,” he said.

Cookie Dough Dip — Homemade Hooplah Is it too soon to post another cookie dough recipe? Yes? Maybe? Sorry, I just can’t help myself. I must have had a bigger dose of cookie dough cravings than I thought, because not only did I make (and eat all of) these Red Velvet Cookie Dough Bars, but when we had company come the following Friday and I needed a fast and easy dessert, this is the dip I decided to make. But can you blame me?

Rhythm and Meter in English Poetry Rhythm and Meter in English Poetry English poetry employs five basic rhythms of varying stressed (/) and unstressed (x) syllables. The meters are iambs, trochees, spondees, anapests and dactyls. In this document the stressed syllables are marked in boldface type rather than the tradition al "/" and "x." Each unit of rhythm is called a "foot" of poetry. The meters with two-syllable feet are IBM Bets Big On Blockchain, The Bitcoin Technology That Could Revolutionize Business IBM will announce its plans for developing blockchain, the distributed ledger technology underpinning bitcoin, on Tuesday, according to a report by the Wall Street Journal, as the company seeks to take a lead on what could become a revolutionary technology. IBM’s CEO Ginni Rometty will reportedly announce details of the company’s plans to advance blockchain technology at a conference Tuesday, including plans to test its own version of the blockchain software during 2016 and its ongoing collaboration with the Hyperledger project. IBM is among a number of companies that have contributed code to the Hyperledger project, which is run by the Linux Foundation, and seeks to build an open source repository of blockchain code that will address current gaps in technology. “The Hyperledger Project is a collaborative effort to focus on an open platform that will satisfy a variety of use cases across multiple industries to streamline business processes,” the foundation said in a statement.

Pottermore Sorting Quiz (all possible questions) Your results for this quiz have been calculated and are presented below: Keep in mind this is not an accurate result, because you did not answer the questions. In order to get an accurate result for "Pottermore Sorting Quiz (all possible questions)" please go back and answer all the questions. Sponsored Links: Characteristics of A Poem.. One of the most definable characteristics of the poetry is economy of language. Poets are miserly and unrelentingly critical in the way they dole out words to a page. Carefully selecting words for conciseness and clarity is standard, even for writers of prose, but poets go well beyond this, considering a word’s emotive qualities, its musical value, its spacing, and yes, even its spacial relationship to the page.The ‘paragraph’ in a poem is called a stanza or a verse. Poetry does not necessarily have to have ordered/regular standards.Poetry is evocative. It typically evokes in the reader an intense emotion: joy, sorrow, anger, catharsis, love and the like.Poetry has the ability to surprise the reader with an Ah Ha! Experience — revelation, insight, further understanding of elemental truth and beauty.

IBM Acquiring Truven Health Analytics For $2.6 Billion And Adding It To Watson Health IBM announced its intent to buy Truven Health Analytics today for a whopping $2.6 billion. It is the fourth major purchase for Watson Health since the unit was established in 2014. Watson Health was formed when IBM purchased Phytel and Explorys in April, 2014. Both companies had the common denominator of being data-driven health companies. The unit added Merge Healthcare for another billion dollars last August to give the company access to a huge store of imaging data. With today’s purchase, IBM gets access to Truven’s cloud-based data repository, 2500 employees and 8500 clients, including U.S. federal and state government agencies, employers, health plans, hospitals, clinicians and life sciences companies.

12 Ways to Eat Cookie Butter - Spoon University I’m only human. Like most people, when I heard about the existence of cookie butter, my mind began to reel. Sure, given my recent obsessions with SunButter and almond butter, I was apprehensive. But like any “butter” addict, curiosity got the best of me. The Rhetorical Triangle - Communication Skills from MindTools Making Your Writing Credible, Appealing, and Logical © iStockphoto/alexsl Does your heart sink a little when you are asked to prepare a written document or present information to an audience? If so, you're not alone! Many people struggle with putting their ideas and thoughts on paper and delivering a message. Can Watson Fix IBM's Fortunes? I'd mentioned a month ago in the Trading With Cody Chat Room that I was excited about the potential for IBM's (IBM) Watson product, and the artificial intelligence it might enable in years ahead. A recent Fortune article discussed one Watson application: "The cognitive computing wunderkind, known for its winning turn on Jeopardy, is pairing its artificial intelligence with the mobile sensing power of Apple's (AAPL) smart watch to create a health platform that can interact and adapt to each individual user. It's the first time Watson's super-computing power will be used with the Apple Watch to transform how people manage their wellbeing. It all happens within an app called CaféWell Concierge, Powered by Watson."