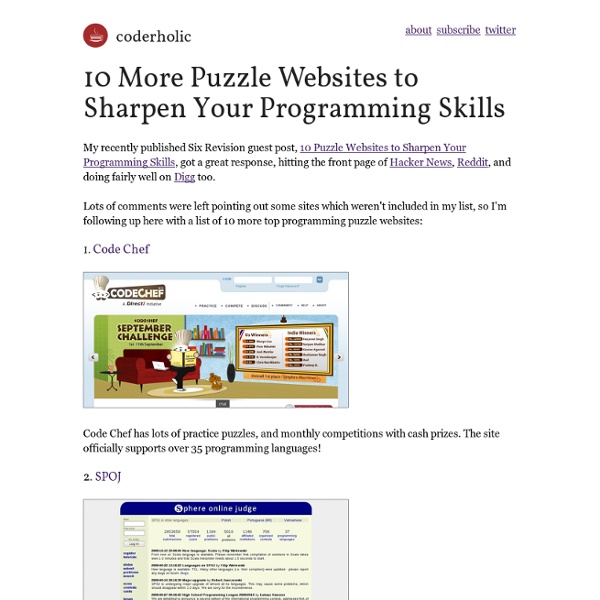 My recently published Six Revision guest post, 10 Puzzle Websites to Sharpen Your Programming Skills, got a great response, hitting the front page of Hacker News, Reddit, and doing fairly well on Digg too. Lots of comments were left pointing out some sites which weren't included in my list, so I'm following up here with a list of 10 more top programming puzzle websites: 1. Code Chef Code Chef has lots of practice puzzles, and monthly competitions with cash prizes. The Sphere Online Judge contains 1871 different programming problems. 3. The aim with code golf is to submit a solution using the fewest characters possible.Solutions can be submitted in Perl, Python PHP or Ruby. 4. Over 2600 great programming puzzles, and also regular contests. 5. An online competition site that automatically checks your submissions. 6. The code jam is a programming contest from Google. 7. 8. A British version of the computing olympiad. 9. 10. A site dedicated to practical Java programming problems.

karan/Projects 14 Coding Challenges to Help You Train Your Brain Programming is becoming an essential part of nearly every industry known to man, the way it helps to organize and maintain large systems is not possible to compare to anything else, and so more and more people begin their journey. You can learn to code both from interactive platforms and also from books – whichever you find most appropriate and easy to learn from. But, sometimes that’s not good enough, and we want to practice new things. Coding is a lot about creativity, your ability to come up with new and interesting ideas; but sometimes, due to a large amount of time spent tackling common problems, we forget about creativity. I’m not quite sure whether that is the reason coding challenges were made, but they certainly help with the part where you need to think of your own stuff to program. We could say that coding challenges are great for: 1. 2. HackerEarth provides a SaaS application to do an automated assessment of the technical and logical skills of candidates. 3. 4. 5. 6. 7. 9. 10.

Coffee Time Challenges As many of you know, I proudly work at facebook. 1) Two Bases Challenge: Find three digits X, Y and Z such that XYZ in base10 (ten) is equal to ZYX in base9 (nine)? Click for hint There are more elegant ways to solve it, but the solution set is so small, you might as well just brute force it. Click for solution 2) One Million Challenge: Write 1,000,000 as the product of two numbers; neither of which contains any zeroes. What are the prime factors? 3) High Product Challenge: Use the digits 0-9 to create two numbers. Bigger numbers go at the front. 4) Exactly a third Challenge: Arrange the numerals 1-9 into a single fraction that equals exactly 1/3 (one third). 5823 / 17469 or 5832 / 17496 5) Three dice Challenge: I roll three dice, and multiply the three numbers together. You should be able to do this without a computer! 6) Word Doc Challenge: I open up a Word document and type all the numbers 1-10000, separated by spaces, (I did not use any 'thousands' punctuation; just raw numbers). 7) Legs 28 dogs

10 places where anyone can learn to code Teens, tweens and kids are often referred to as “digital natives.” Having grown up with the Internet, smartphones and tablets, they’re often extraordinarily adept at interacting with digital technology. But Mitch Resnick, who spoke at TEDxBeaconStreet, is skeptical of this descriptor. Sure, young people can text and chat and play games, he says, “but that doesn’t really make you fluent.” Mitch Resnick: Let's teach kids to code Fluency, Resnick proposes in this TED Talk, comes not through interacting with new technologies, but through creating them. The point isn’t to create a generation of programmers, Resnick argues. In his talk, Resnick describes Scratch, the programming software that he and a research group at MIT Media Lab developed to allow people to easily create and share their own interactive games and animations. At Codecademy, you can take lessons on writing simple commands in JavaScript, HTML and CSS, Python and Ruby. While we’re at it: bonus!

Sleep: The Real Key to a Long-Term, Loving Relationship? It is one of the most common struggles that couples face: Over the life of a relationship, partners can lose a sense of appreciation for each other. Holding on to a sense of gratitude for each other is one of the hallmarks of couples who stay content in their relationships over the course of many years. On the other hand, loss of gratitude and appreciation between partners can jeopardize a relationship’s long-term success. A new study suggests that poor sleep may contribute to a lack of appreciation between romantic partners. After a night of sleep, people were asked to make a list of five things for which they were grateful. The last finding is particularly interesting. Sleep can pose a number of challenges to relationships. These may be among the reasons why an increasing number of couples are choosing to sleep in separate beds. What’s more, sleeping together can actually reinforce good sleep habits. Sweet Dreams, Michael J.