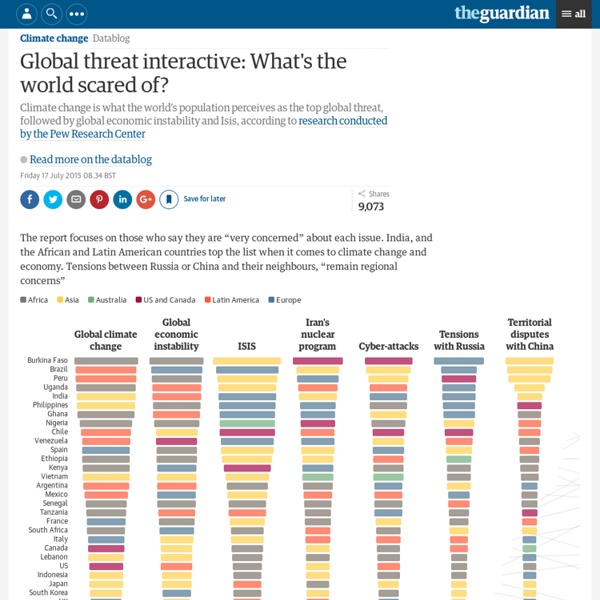 These Maps Show You How to Live, Not Just Where Data for GOOD Knowledge is the first step on the way to progress. It used to be that paper maps were the free gifts that came with your new compass, graphically representing geography via points, lines, and fire-breathing dragons—all of which indicated orientation, distance, latitude, longitude, and the sheer vastness of uncharted territory. But today’s multidimensional digital maps are comprehensive, interactive, and they’ve got the compass built right in. Plus, they’re changing the way we interact with our environments and with each other. Warming of oceans due to climate change is unstoppable, say US scientists The warming of the oceans due to climate change is now unstoppable after record temperatures last year, bringing additional sea-level rise, and raising the risks of severe storms, US government climate scientists said on Thursday. The annual State of the Climate in 2014 report, based on research from 413 scientists from 58 countries, found record warming on the surface and upper levels of the oceans, especially in the North Pacific, in line with earlier findings of 2014 as the hottest year on record. Global sea-level also reached a record high, with the expansion of those warming waters, keeping pace with the 3.2 ± 0.4 mm per year trend in sea level growth over the past two decades, the report said.

TRI and Superfund Environmental Maps TOXMAP classic provides an Advanced Search as well as the ability to save search results and to build custom regions to focus your search. It does not require Flash and is accessible to users with disabilities. No new features are planned. The beta version of TOXMAP is in active development. It has an improved map appearance and interactive capabilities as well as improved U.S. Census layers, availability by Census tract, and additional and updated datasets.

Climate scientists say 2015 on track to be warmest year on record The Earth experienced its hottest June and the hottest first half of the year since records began, according to scientists. Off-the-charts heat is “getting to be a monthly thing”, said Jessica Blunden, a climate scientist for the National Oceanic and Atmospheric Administration. June was the fourth month of 2015 to break a record, she said. “There is almost no way that 2015 isn’t going to be the warmest on record.” Pollution Locator: USA Over 4 billion pounds of toxic chemicals are released by industry into the nation's environment each year, including 72 million pounds of recognized carcinogens. Scorecard can give you a detailed report on chemicals being released from any of 20,000 industrial facilities, or a summary report for any area in the country. Scorecard spotlights the top polluters in the U.S., and ranks states and counties by pollutant releases.

This chart will silence your friends who make excuses for climate change Perhaps you’ve had one of those conversations about climate change where someone lists all the things — other than us people burning carbon — that could be making the weather go haywire in recent decades. There’s ozone pollution. The Earth’s orbit. The way we keep on cutting down trees and setting them on fire or making stuff out of them. 27 Ideas for Teaching with USGS Topographic Maps Powered by Translate The USGS publishes approximately 57,000 different topographic maps covering the United States. spp.dsdip.esriaustraliaonline.com SPP Interactive Mapping System (Plan Making) +Administrative Layers +Liveable Communities and Housing There is no mapping associated with this State Interest. +Economic Growth +Environment and Heritage

What's Really Warming the World? Climate deniers blame natural factors; NASA data proves otherwise Climate scientists tend not to report climate results in whole temperatures. Instead, they talk about how the annual temperature departs from an average, or baseline. They call these departures "anomalies." They do this because temperature anomalies are more consistent in an area than absolute temperatures are.

Melbourne - Planning Schemes Online Skip to content Department of Transport, Planning and Local Infrastructure Planning Schemes Online You are here: Home > Planning Schemes > Melbourne Other Resources Has the great climate change migration already begun? The island paradise is under attack. Thanks to destabilizing forces of climate change – rising sea levels and strengthening storms, particularly – some of Earth’s most picturesque locations are being scrubbed from the map. And the residents of these postcard settings are being forced to consider relocating to avoid being swept away into the sea. In Tuvalu, a collection of reef islands and atolls midway between Hawaii and Australia, saltwater intrusion has already made it difficult to grow traditional crops, and the rainfall that provides much of the drinking water has become unreliable. Despite investments in freshwater storage systems and makeshift bulwarks to slow coastal erosion, much of the nation – where the average land height is a mere 2 meters (about 6.5 feet) above sea level – will likely be under water by the end of the century. “To be successful, it need[ed] to be argued beyond the convention, which is what we did,” Carole Curtis wrote the Guardian by email.