Deb Roy: The birth of a word 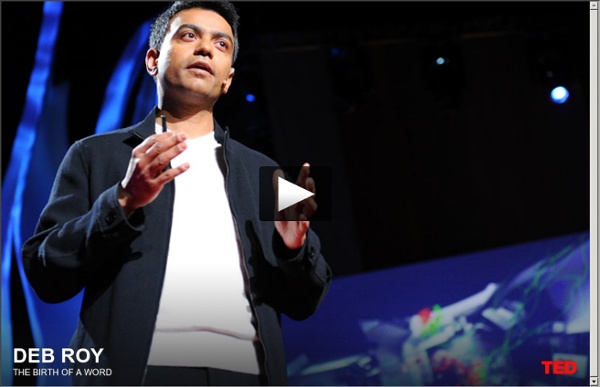 Related:  from metaphor to model...

What Is The Funniest Joke In The World? : 13.7: Cosmos And Culture iStockphoto What's brown and sticky?A stick. I actually laugh every time I hear this joke. Minding the Planet: From Semantic Web to Global Mind Draft 1.1 for Review (integrates some fixes from readers) Nova Spivack (www.mindingtheplanet.net) This article presents some thoughts about the future of intelligence on Earth. In particular, I discuss the similarities between the Internet and the brain, and how I believe the emerging Semantic Web will make this similarity even greater. Angst In Germany Over Invasion Of American English : Parallels iStockphoto It seems hardly a sentence is spoken in Berlin that doesn't have an American English word in it. One word that especially grates — and I confess to a certain bias, having learned German as a toddler when it wasn't so Americanized — is a word pronounced "sogh-ee."

Six Global Theories of Mythology: Part Six – Myths express the Unconscious Human Mind The Human Mind The Sixth Global Theory – Myths reflect Man’s Unconscious Mind After the intensity of the progression of mythological theories in their investigation into the psychology, values, phenomenology, history and rituals of any particular civilisation or society, the Psychoanalytical Theory of myths was inevitable. Freud’s ‘Interpretation of Dreams’ investigated the link between the language of dreams and mythological symbols based on the tribal belief that dreams and myths arise from the same reality. How Language Seems To Shape One's View Of The World : Shots - Health News "It's on the left," he says. "No, it's southeast of here," she says. iStockphoto hide caption itoggle caption iStockphoto "It's on the left," he says.

The Global Brain, the Semantic Web, the Singularity and 360-2020 consciousness to create the Web of WE: socially-voiced co-creation - un knol de 刘Twain Video Introduction F irstly, thank you for your interest and I hope readers will contribute their own considered analysis and gut intuitions here intelligently, regardless of whether or not they agree with these postulations and the presentation of them. Secondly, I’m looking forward to our interactions and building upon this model together. to be published in: R. Trappl (ed.) (1996): Cybernetics and Systems '96 (World Science, Singapore?)Francis Heylighen & Johan Bollen

A Metathinking Manifesto The significant problems we face today cannot be solved at the same level of thinking we were at when we created them. – Einstein For several years now, I’ve been studying the intersection of technology, culture and communication, the impacts of social media, the relationship between creativity, innovation and design, and the potential of various futures. I’ve had this gnawing sensation at the edges of my mind that all these areas were held together by a common thread, but I couldn’t put my finger on the connection. My intention is that by taking this out of the incubation stage in my head and putting it into words, it will become clarified and provide some value. First off, let me lay out a framework . My ideas are based on 3 main concepts: Birth of the global mind The best symbiosis of man and computer is where a program learns from humans but notices things they would not Global consciousness. We’ve heard that before. In the 1960s we were all going to be mystically connected; or it would come as a super-intelligent machine – Terminator’s Skynet – that is inimical to humanity. And yet, what if the reality is more mundane?