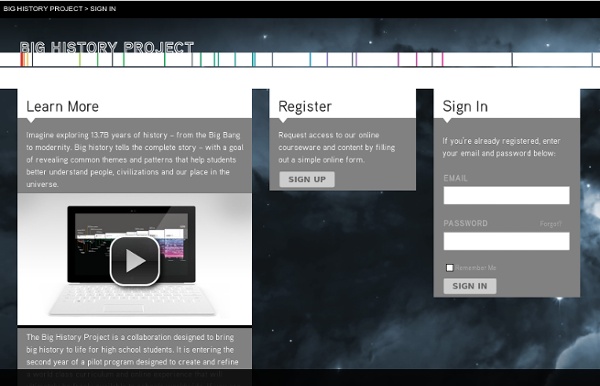 Big History Project Description[edit] Bill Gates became interested in big history when he heard a series of lectures by Christian. For Gates, “he really blew me away. Here’s a guy who’s read across the sciences, humanities, and social sciences and brought it together in a single framework. It made me wish that I could have taken big history when I was young, because it would have given me a way to think about all of the school work and reading that followed. In particular, it really put the sciences in an interesting historical context and explained how they apply to a lot of contemporary concerns”.[3] After Gates and Christian met to discuss the lectures, the genesis of the Big History Project occurred. Project team[edit] The academic advisers are:[6] Initial pilot program[edit] Seven schools were selected for the initial classroom pilot phase of the project. Future pilot program[edit] A second phase of piloting in schools will be utilized in 2012/13 before the release of a free curriculum online in 2013.

The Object of History | Behind the Scenes with the Curators of the National Museum of American History David Christian (historian) David Gilbert Christian (born 1946) is an Anglo-American historian and scholar of Russian history notable for creating and spearheading an interdisciplinary approach known as Big History.[1][2] He began teaching the first course in 1989 which examined history from the Big Bang to the present using a multidisciplinary approach[3][4] with assistance from scholars in diverse specializations from the sciences, social sciences, and humanities.[3] The course frames human history in terms of cosmic, geological, and biological history.[5] He is credited with coining the term Big History[6][7] and he serves as president of the International Big History Association.[5] Christian's best-selling Teaching Company course entitled Big History caught the attention of philanthropist Bill Gates who is personally funding Christian's efforts to develop a program to bring the course to high school students worldwide.[5][8] Christian was born in Brooklyn, New York, to British and American parents.

Internet History Sourcebooks Internet Modern History Sourcebook The Internet Modern History Sourcebook now contains thousands of sources and the previous index pages were so large that they were crashing many browsers. See Introduction for an explanation of the Sourcebook's goals. Explanation of Sources of Material Here. See the Help! page for all the help on research I can offer. The Modern History Sourcebook now works as follows: This Main Index page has been much extended to show all sections and sub sections. Additional Study/Research Aids In addition to the above structure, there are a series of pages to help teacher and students. Modern History in the Movies Older Style Big Indices Still Available Since some faculty members had built into their course pages direct links to the Sourcebook's old indexes, these remain available, but will not be updated with materials added after 12/31/1998. Subjects covered by the source texts in each Section. Studying History The Early Modern World Reformation Early Modern World Absolutism

Digital History Introduction | Thresholds of Time Throughout history, humans have attempted to understand the beginning of time and the universe, but a lack of technology and knowledge made this concept incomprehensible to earlier humans. In the past, humans have answered the mystery of the beginning through creation myths: mythic tales of animals, humanoids, and supernatural forces whose actions create the Earth and heavens, generally possessing religious significance. Big History historians hope to create a modern creation myth with technological and factual foundations. “For me, big history has become a wonderful way of explaining how both my own person and everything around me have come into being.” Modern science has provided a viable theory as to the beginning of the universe and time as we know it, so Big History strives to provide information which might assist humans in answering the question of one’s place and purpose. “In big history, any questions can be addressed concerning how and why certain aspects of the present

Project Avalon - Klaus Dona: The Hidden History of the Human Race Click here for the PDF version of this interview (20 pages) Click here for the video presentation March 2010 **Ed note: Some transcripts contain words or phrases that are inaudible or difficult to hear and are, therefore, designated in square brackets BILL RYAN (BR): This is Bill Ryan here from Project Camelot and Project Avalon. Klaus is going to be doing an audio commentary on one of his extremely special, unusual, and fascinating slide shows about the artifacts and the various phenomena that he has been researching, discovering, investigating personally all over the world relating to what I think you could legitimately call The Hidden History of the Human Race. KLAUS DONA (KD): That's a very good summary, yes. BR: [laughs] So I'm going to step back here, and what follows now, just kick back and enjoy this slide presentation. What are we looking at here ? Ancient World Maps Ecuador Even the next one, [right, above] you can see how this statue is sitting. Bolivia Colombia Guinea, West Africa