A * Lab to make things 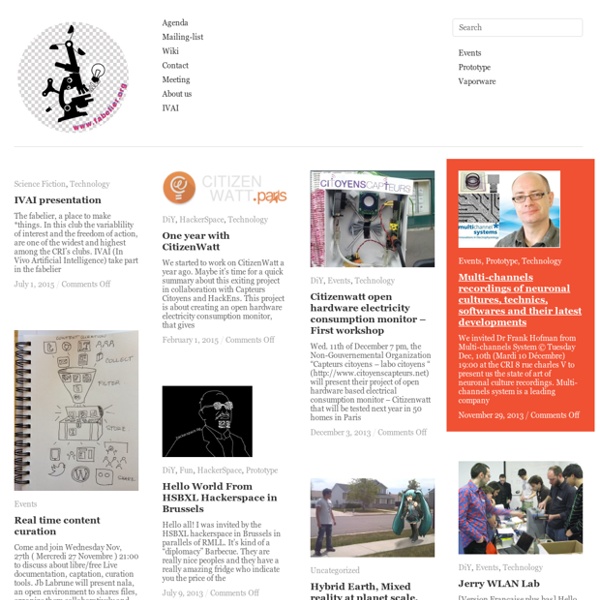 A new dating site wants to help Disney fans find love Obscure Disney knowledge might soon pay off romantically, thanks to a highly specific new dating site that wants to take you from this: ...to this: It's called Mouse Mingle, and it's a website where people can connect with one another over a shared love of all things Disney. Creator Dave Tavres tells Mashable that his website's been in the works since a 2011 trip to Disneyland with a few friends.

[HOW TO] Automate hid driver + CCV in background Hi guys. For few days I tried messing with the sources of both ccv and hid driver but had no luck. My goal was to get hid driver automated and ccv as well working in the background. FTIR Multitouch and Display Device - Experiments with Processing, OSC - Thomas M. Brand materials: - arylic plate, size that is ok for you. make it comaptible to the screensize you will use, so 4:3, 16:9 or so. i took a 640 * 480 * 10 mm plate. be careful when reading the specs on the box of cameras standing on the shelf. for instance 30 fps does not mean automatically that this framerate is available in max resolution. some cameras even seem to duplicate frames to have bigger framerates (??). -optional alternative lens to the one that is normally deliverd along with the camera. take one with a suited focal lenght and F-number for target setup. [Focal Length and Aperture Explained for the Photography Novice] normally optional lenses are sold at the same place as the camera but there are a lot of e-bayers selling different styles of them.

YouTube working on live virtual reality streams, report says Google is on a virtual reality tear to start off 2016. In addition to all the other VR news from the company in recent weeks there's now talk of plans to introduce live, 360-degree video to YouTube. YouTube already offers immersive 360-degree imagery (most popularly through Google's virtual tours) and videos (directly on the site and via Cardboard), but adding a live, 360-degree feature would immediately take things to an entirely new level. Citing multiple sources familiar with the matter, a report from BuzzFeed claims that YouTube has been meeting with 360-degree camera manufacturers to discuss the details around offering live, immersive broadcasts through the popular video-sharing platform. Those are all the details the report offers, as no launch date has been announced and YouTube itself hasn't announced such a product. I got a look at what live VR streaming can be like last year when I watched a Golden State Warriors game via Samsung Gear VR and streamed by NextVR.

24" LLP LCD Project, based on Ikea’s Expedit coffee table. WIP After mounting the lasers, it looks something like this: I’m really happy with the small footprint the “calibration mechanism” have. I mounted the main circuit board to the inner side of the side board. Laser mount - yet another one ;o) Thanks for the encouragement! Don’t plan on adding sides but there’s no laser guard yet - I don’t fancy fried eyes. Has anyone done any real tests on how intense the diffused light from the 25mw lasers actually is? It’s not the best welding job in the world but it’s easy to grind off bad welds :o) It’s made from 20mm box steel and actually really light weight and very portable - cost £20.

How to build a simple screw-adjustable laser mount I need to be able to disassemble my LLP table to transport it, so the worry of laser aligment was bugging me. I thought that using clay would not allow me fine adjustments to get my laser angles 100% correct. I came up with a simple mount that allows you to adjust the up/down pitch of the laser very finely using two screws. Triangle Calculator Instructions Enter values three of the six sides and angles of the triangle and the other three values will be computed. The number of significant values entered will determine the number of significant figures in the results. Frequently Asked Questions Q: I like your triangles, especially the ones that have interior angles not summing to 180 degrees.

Weekly Free Logo Designs For Your Business Free Logo Designs For Your Projects, Added Every Tuesday At Fairpixels, we help ambitious entrepreneurs design their brand. With many unused logo design proposals piling up on our hard drives, we decided to make them available for FREE. If you need a quick, simple and clean logo or placeholder to kick off your project and your budget is limited, check out the feed below or subscribe to get new designs delivered to your inbox once a week.

850nm OSRAM SFH4550 Infrared LEDs (50 pack) - $40.00 : Peau Productions - Store These LEDs were made popular by the recent 10x3 meter LED-LP wall installation by Gabriel Giacomini which you can see in the videos below. They used these LEDs around all the sides of the screens. LED-LP is similar to LLP where it creates a plane of light just over the touch surface and the blobs are created when an object breaks the beam. This is a much safer way to make large installations than using lasers. As you can see bolded in the specifications below, the beam angle is very very narrow at 6 degrees, making these the most ideal LEDs for LED-LP.

Prototyping Laser Mount for the LLP Screen « ㅁ An early prototyping laser mount designed to fit to our frame design, with controls to accurately level the laser on the LLP multitouch surface. Like this: Like Loading... About Suk Kyoung Choi Laser Light Plane Illumination (LLP) From NUI Group Community Wiki Overview Infrared light from a laser(s) is shined just above the surface. The laser plane of light is about 1mm thick and is positioned right above the surface, when the finger just touches it, it will hit the tip of the finger which will register as a IR blob. LLP Parts List

Intel and Google want your phone to see in 3D Intel's RealSense camera tech can sense and scan three-dimensional objects, while Google's Project Tango sensors are adept at motion tracking and 3D-mapping. It just makes sense for the two to come together, which is exactly what was announced today at Intel's Developer Forum. The two have developed a smartphone and software kit that integrates both RealSense and Project Tango technologies, as can be seen in the hardware prototype seen here. While this handset is strictly for developers at the moment, it offers a pretty good early look at what could potentially be in consumer phones later on. Gallery | 6 Photos RealSense Project Tango phone

Labs » Rear-Projection TV Turned into a Multi-touch Display Continuing our multi-touch research, we’ve been working on turning an off-the-shelf rear projection TV into a multi-touch display. This screen has the best width-to-depth ratio of any multitouch system (67″ diagonal viewing area and only 16″ deep). This is also the first example of hacking a multi-touch system into an off-the-shelf television. The system we settled on uses very few additional components and could potentially be applied to any rear-projection TV. The display is only 16″ deep Setup and Theory