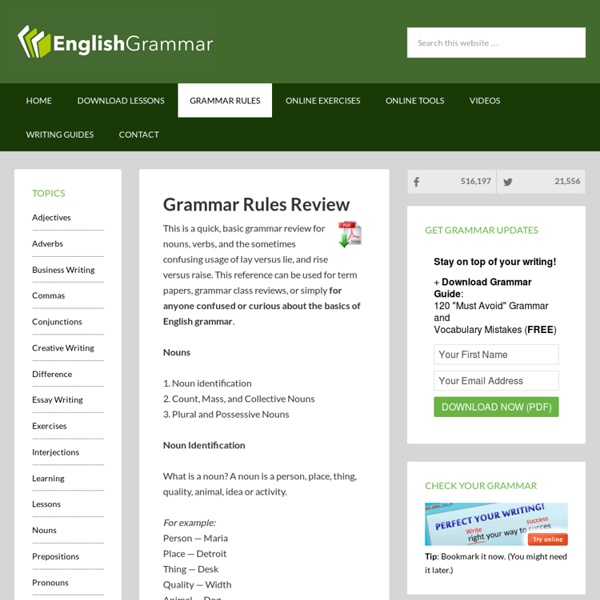 This is a quick, basic grammar review for nouns, verbs, and the sometimes confusing usage of lay versus lie, and rise versus raise. This reference can be used for term papers, grammar class reviews, or simply for anyone confused or curious about the basics of English grammar. Nouns 1. Noun identification 2. Count, Mass, and Collective Nouns 3. Noun Identification What is a noun? For example: Person — Maria Place — Detroit Thing — Desk Quality — Width Animal — Dog Idea — Independence Activity — Navigation Spot the nouns in a sentence: Maria went into the city to purchase detergent. Nouns: Person — Maria Place — City Thing — Detergent The functions of nouns Nouns sometimes function differently in sentences. Grammar vocabulary: Nominal means any word, or group of words, used as a noun. Types of Nouns The names of specific things, places, and people, like Maria or Detroit, are Proper nouns. General, colloquial names, like table or house are Common nouns. Count Nouns Singular — Car Plural — Cars Verbs

Actors: Listen A Minute.com: English Listening Lesson Being an actor ____________ be great. I really wish I could act. I’d love to have the confidence to act in ____________ of people. Being a member of the audience at the ____________ is great, but acting on stage is better. I wonder what it’s like to be a movie actor. Lesson Plan for The Boy in the Striped Pajamas Discussion Questions: See Questions Suitable for Any Film That is a Work of Fiction. 1. In the opening scene of the film, boys are running happily through an upper class area of Berlin. They run past a group of Jews carrying their meager belongings being herded into a truck. 114 FREE Past Simple vs. Present Perfect Worksheets About Our Past Simple vs. Present Perfect Worksheets In this section, you can find worksheets that combine the past simple and present perfect tenses.

The Boy in the Striped Pyjamas (film) The Boy in the Striped Pajamas[1][2] is a 2008 British-Irish historical-drama buddy film based on the novel of the same name by Irish writer John Boyne.[3] Directed by Mark Herman and produced by David Heyman, it stars Asa Butterfield, Jack Scanlon, David Thewlis, Vera Farmiga, Amber Beattie and Rupert Friend. This film is a Holocaust drama, and it explores the horror of a World War II Nazi extermination camp through the eyes of two 8-year-old boys; one the son of the camp's Nazi commandant, the other a Jewish inmate. The film opens in Berlin in Nazi Germany during the Holocaust where a little boy named Bruno (Asa Butterfield) is seen playing with his three friends. After arriving home he learns that his father Ralf (David Thewlis) has been promoted to SS-Obersturmbannführer Commandant. After a party to celebrate the promotion, Bruno, his father, Bruno's mother Elsa (Vera Farmiga) and older sister Gretel (Amber Beattie) relocate to Poland.

Adjective and A List of Adjectives: EnchantedLearning.com Advertisement. EnchantedLearning.com is a user-supported site. As a bonus, site members have access to a banner-ad-free version of the site, with print-friendly pages.Click here to learn more. (Already a member? Click here.) The Tell-Tale Heart by Edgar Allan Poe The Tell-Tale Heart by Edgar Allan Poe Today we present the short story "The Tell-Tale Heart" by Edgar Allan Poe. Here is Shep O'Neal with the story. True! 12 Swedish words with just awesome literal translations - The Local A filthy-minded lobster, i.e. a snuskhummer. Photo: Gorm Kallestad/NTB scanpix/TT One of our favourite things about the Swedish language is its wonderful compound words, which range from being utterly bizarre to making perfect sense. It may be a tricky language to master, but one of the great things about Swedish is that you don't actually need a particularly large vocabulary. That's because rather than inventing new words, the Swedes are big fans of creating compound words out of existing ones.

A Weird Fact About Effective Listening Skills Picture by: Michal Zacharzewski How often have you wondered how the brain processes sound? After all, that is what contributes to effective listening skills. Not that often. Forrest Gump: Lessons On Movies.com: ESL Lessons FORREST GUMP POSTER 1. SIX WORDS: Look at the poster and write down six words (more if you like) that you think of as you look at it. Share the words with your partner(s). Why did you choose them? 2. STORY: Talk about what you think the story of the movie is – the start, beginning, end, etc.