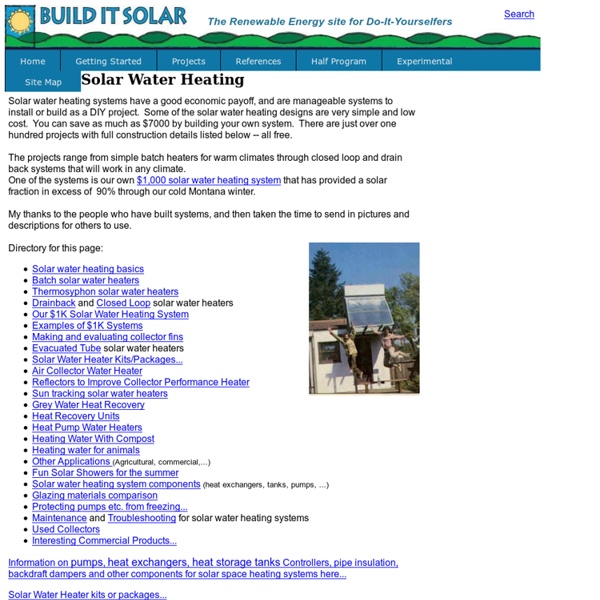 Solar water heating systems have a good economic payoff, and are manageable systems to install or build as a DIY project. Some of the solar water heating designs are very simple and low cost. You can save as much as $7000 by building your own system. There are just over one hundred projects with full construction details listed below -- all free. The projects range from simple batch heaters for warm climates through closed loop and drain back systems that will work in any climate. One of the systems is our own $1,000 solar water heating system that has provided a solar fraction in excess of 90% through our cold Montana winter. My thanks to the people who have built systems, and then taken the time to send in pictures and descriptions for others to use. Directory for this page: Information on pumps, heat exchangers, heat storage tanks Controllers, pipe insulation, backdraft dampers and other components for solar space heating systems here... Solar Water Heater kits or packages... Questions? Related:  Solar • eco chamber

Atlantic Canada Solar Directory | Solar Nova Scotia Power Strength & Energy Solutions Ltd is a renewable energy company utilizing the latest technologies to bring about the most efficient use of the sun's energy for residential and commercial applications. These applications include solar thermal for domestic hot water and space heating, wood stoves/boilers, wood chip boilers, pellet stoves/boilers, photovoltaic for electrical energy generation and LED lighting. We combine solar thermal collectors and wood boilers/wood gasification boilers which is a great marriage. Our principals have over 30 years experience in the fields of renewable energy. We design and install systems to strict and safe standards in accordance with local code requirements. At PSES, we ensure that all our clients' needs for clean renewable energy are met with affordable, reliable, easy to use, convenient and efficient designs. Areas serviced: Canada, all provinces and territories.

10 Clever Architectural Creations Using Cargo Containers: Shipping Container Homes and Offices Cargo Architecture: 10 Shipping Container Homes & Offices Article by Urbanist, filed under Offices & Commercial in the Architecture category. With the green theme growing in popularity across every stretch of the world, more and more people are turning to cargo container homes for green alternatives for office, and even new home, construction. There are countless numbers of empty, unused shipping containers around the world just sitting on the shipping docks and taking up space. The reason for this is that it’s too expensive for a country to ship empty containers back to the their origin in most cases, it’s just cheaper to buy new containers from Asia. The result is an extremely high surplus of empty shipping containers that are just waiting to become someone’s home or office. There are plenty of benefits of to the so-called shipping container architecture model. The world’s first hotel built from recycled shipping containers has popped-up in Uxbridge, West London.

$350 Solar Heated Hot Tub Search The Renewable Energy site for Do-It-Yourselfers Brian's Description: Here's some info on my project. I didn't take many pictures, but the construction is pretty basic. I framed the collector box with 2"x6" lumber and 1/4" plywood, the size is about 26" x 8'. The pump came from Lowes and is the Garden Treasures MD170 fountain pump. We are real happy with our choice of the 150 gallon Rubbermaid stock tank for our tub. I am using 3 sheets of the 3/4" blue Styrofoam for the tank cover. I did spend about $400 on this project, but did already have some of the materials. Tank $120 Pump 30 Urethane ins 90 (with shipping) sheet insulation 50 CPVC 75 I had most of the wood already, used sections of a old water hose between tank and collector, with pool noodles for insulation. I'm sure I left out some details, so feel free to ask questions. Brian And, the this note on performance from Brian: Was in the hot tub last night at 110 deg, still 106 tonight without running it today.

One Per Cent: Grid-scale battery could keep going and going... Hal Hodson, technology reporter We need a big battery for when the sun doesn't shine (Top Photo Corporation/Rex Features) A new battery technology may pave the way for cheap, long-lived power storage that can quickly pump electricity into the grid to compensate for fluctuating renewables like wind and solar. Developed by Yi Cui and colleagues at Stanford University in California, the battery's key advantage is its electrodes, which can run for a thousand charge cycles without degrading. Battery electrodes typically degrade over time as ions in a battery cell repeatedly slam into them and are ripped away again. By coating the negatively charged cathode in copper hexacyanoferrate and using an anode made of activated carbon and a conductive polymer - compounds that allow electricity-carrying ions to move easily in and out - the team were able to build a prototype battery with electrodes that didn't lose capacity over time. (Image: Business Wire)

VC Confidential: Why Great Companies Get Started in the Downturns I have always been amazed by how many of our success tech stories, as well as Fortune 500 companies, started during drastic down turns. Innovation does not take a holiday, and in fact, thrives during difficult times when pain & need are greatest. While the current downturn is historic, it pails in comparison to the 22 year depression the US experienced from 1873 to 1895, triggered by the Vienna stock market crash. During this extended drought, a large number of Fortune 500's & major corporations started including Eli Lilly, IBM, Merck, Hershey's, Gillette, Alcoa, J&J, Chevron, GE, AT&T, Abbott, Lilly, Coors, Johnson Controls, Bristol-Myers and PPG to name a few. During the great depression (1929-1939), Texas Instruments, HP, 20th Century Fox and United Technologies all launched. Other periods: during the Oil shock & market crash (1973-1976) Microsoft, Genentech & Apple started.

Rocket Stove The Rocket Stove is a variety of wood-burning cooking stove. It is easy to construct, with low-cost materials. These are low-mass stoves designed to burn small pieces of wood very efficiently. Cooking is done on top of a short insulated chimney. Rocket Stoves use branches, twigs, small wood scraps, or just about any small combustible material. A related design, the Rocket Bread Oven, is constructed using two 55 gallon drums, one inside the other. Rocket Stoves operates roughly twice as efficiently, and substantially more cleanly, than the open fire cooking methods still used in many areas of the world. Because these qualities improve local air quality, and discourage deforestation, the rocket stove has attracted the attention of a number of Appropriate Technology concerns, which have deployed it in numerous third-world locales (notably, the Rwandan refugee camps). Key features Edit Problems Alternatives/Variations Sierra Zip Stove Edit Two-Door Rocket Stove Wood Pellet Camp and Survival Stove

Sustainable design, zero energy passive solar green home HTM high thermal mass holistic housing consultation packages for the earthhome do-it-yourselfer With over 20 years of experience, we are the original zero-energy green home building company! Sustainable design, zero-energy, passive solar homes are free from mechanical climate control systems for truly independent living. Our website is packed with loads of valuable free information, so please take the time to read all of this passive solar chapter and all of the many detail pages. HTM construction homes will function just fine in any climate, anywhere in the world. Passive solar heating and radiant cooling energy needs to be quickly absorbed and released. Embodied energy in choice of construction materials is an important environmental concern. Chapter 2 - Photogallery of our most sustainable HTM design, created over twenty years ago Orientation naturally plays a major role in any passive solar design. Healthy homes ventilate constantly to ensure a fresh indoor air supply. Beware of envelope home stick-frame architecture still being sold as 'green building'.

WNC Green Building Directory | Articles By Matt Siegel on 03/24/2011 “Never doubt that a small group of thoughtful, committed citizens can change the world; indeed, it's the only thing that ever has,” anthropologist Margaret Mead said. The Western North Carolina Green Building Council — its members and its founders — demonstrates the truth in those words: About a decade ago, the council literally started as a conversation between two people. It then grew into a group of several people, who started out sitting around a table and discussing how to grow green building in the region. Ashley Featherstone and Jon Senechal representing WNCGBC at Earth Day 2001. In 2011, the organization celebrates its tenth year of helping create a more sustainable and healthier WNC. According to Duncan McPherson, another WNCGBC founder, “The primary need was education at that point, which included educating the city, inspectors, builders and architects. ... Here are some achievements from the past 10 years that the Council can put numbers to: