React.js Introduction For People Who Know Just Enough jQuery To Get By · React for Designers 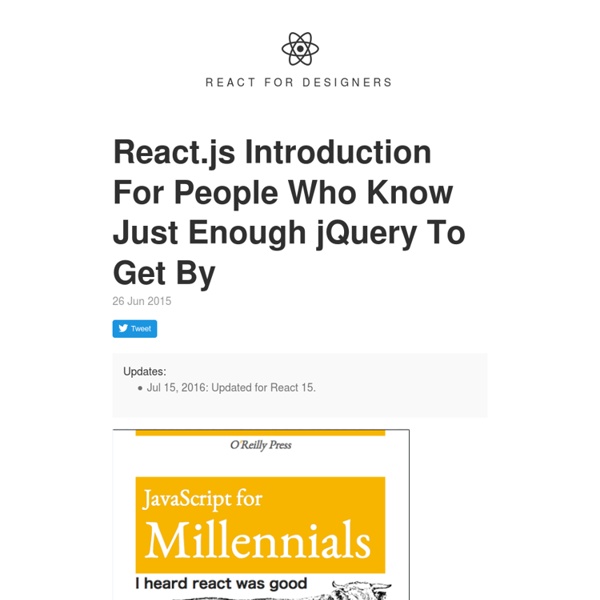 Updates: Jul 15, 2016: Updated for React 15. I also heard React.js was good and recently spent some time playing with it. Now that I’m pretty comfortable with React, I decided to write a tutorial on this subject. Target Audience: People Who Know Just Enough jQuery to Get by Before I begin, I’d like to clarify who my target audience is. Zed Shaw, the author of “Learn Code the Hard Way” series, recently wrote an excellent blog post called Early v.s. I don’t want to make a similar mistake here. In this tutorial, I’m targeting the third group I mentioned: people who know just enough jQuery to get by. Designers who can do basic coding in HTML/CSS/jQuery. If you’re comfortable with JavaScript or any of the frontend frameworks like Backbone/Ember/Angular, this tutorial is NOT for you, and you’ll be very frustrated with my writing style. Also, if you already know React, you’ll be pretty upset with me as well because I’ll be talking mostly about states instead of immutability or componetization. Related:  React

Using React and jQuery Together · Oyster.com Tech Blog 22 Mar 2016 by Alex In this post I’ll be covering some tips on how to use React and jQuery together in the same UI. Okay so first off you might be thinking “why would you want to do such a thing?” - in fact the idea of trying to make React’s declarative style live together with imperative jQuery DOM updates may have you thinking something like this, and for the most part, you wouldn’t be wrong. So first the “why.” If you’re starting a brand new, “greenfield” project and you want to use React, then just do it. Are you sure you can’t rewrite it? Let’s say you have some piece of UI that gets rendered with jQuery, and you want to stick in some new component written with React. Okay so you can’t rewrite it For whatever reason you’ve determined it’s not practical to rewrite your jQuery code. One further caveat is that you should only really consider this mixed approach if you’re planning to eventually replace jQuery rendering with React. Let’s write some code jQuery inside a React component

ReactJS For Stupid People TL;DR I struggled for a long time trying to understand what React is and how it fits in the application architecture. This post is what I wish someone had told me. What is React? How does React compare to Angular, Ember, Backbone, et al? How do you handle data? How do you contact the server? Stop. Stop it right now. React is ONLY THE VIEW LAYER. React is often mentioned in the same breath as other Javascript frameworks, but "React vs Angular" doesn't make sense because they aren't directly comparable things. React gives you a template language and some function hooks to essentially render HTML. You absolutely cannot build a fully functional dynamic application with React alone. The Good After working with React for a while, I've seen three very important benefits surface. 1. This may be the most important benefit, even though it is not different from Angular templates. Say you have to update your site's header with the user's name upon log in. Here's how you might do it in React: 2. 3. The Bad

What is hard to do using React.js compared to jQuery? - Quora The Future of Web Development - React, Falcor, and ES6 | Widen Engineering In this article, I’m going provide a glimpse into the future of web development. You will gain a new perspective on structuring a user interface, server, and data endpoints. In other words, I will cover the full “stack” - both the browser and server code - and you will be able to examine and execute all of the referenced code in a fully-functional GitHub repository. I must assume that you, as a developer, possess the following qualities: Intermediate understanding of JavaScript. If you lack any of these qualities, you may still be able to navigate this article and the related code, but these gaps in your knowledge will likely prevent you from extending my code to support a more realistic or non-trivial scenario. A new and shiny approach. In order to address each of these goals, I decided to replace my current lineup of tools with an entirely new set, some of which I had never used before. A futuristic stack React In short, I really appreciate the relatively narrow focus of React. Falcor

Trying out React - Artsy Engineering We recently picked up a Rails application that was a few features away from completion. This application allows our Genome Team to classify multiple artworks based on visual and art historical characteristics. These characteristics, or "genes", can be added, removed, and changed for any of the artworks on the panel. Our genomers are masters of efficiency, and over the years we have worked closely with them to tailor a dynamic interface to their specific workflow. When we started working on the app, the back-end was organized, modular, and interfaced seamlessly with the Artsy API, but there were still a few front-end features we needed to implement before it could be used by the Genome Team. The app did not use a front-end framework, and as our features scaled it was difficult to keep track of UI state with pure CoffeeScript and global event listeners. Choosing a Suitable Framework In line with the React tutorial, we first broke up our UI into functional and visual components. Challenges

The Redux ecosystem The Redux ecosystem Or packages you should know to create a Redux production application Warning: This article is about front-end applications and nothing about server rendering. What’s going on? Redux & React are currently mainstream technologies in front-end. The problem is that the process of changing developer’s mind to start thinking in React & Redux way isn’t actually smooth. Obviously, when we hear about React & Redux bunch, we begin to puzzle out exactly those two words. “Okay, I got it, — you said, — React builds my interfaces using components, Redux handles my data using the singleton data store, actions and reducer functions. Yes, you have! The truth is that interface building and data handling are not enough to create a real production application. So, the gist is the following. Reusable components First of all, when you develop a big application with React, you need to reuse your components. When you are aware of this idea, you need a tool to apply it. Routing Authentication

React.js resources It has been some time (almost 2 years?) since we started using React.js at Arkency. It quickly propagated to all of our projects. Along the way, we’ve been blogging a lot about what we learnt. So far we’ve released: 28 blogposts5 open repositoriesReact.js koans7 YT videos2 books (with repos)dozens of emails to our React Kung Fu mailing list This blogpost is an attempt to put all the resources in one place. Rails meets React.js The book will teach you: How to install and configure React.js in your Rails project.Working with dynamic React based forms.How to transform your view to React-managed components.What you can use React.js for in your projects and how.Detailed knowledge about how to use it and best practices to work with React.js, with examples.How to test React components.You will also get Ruby and CoffeeScript code for the examples.And it begins with a tutorial so that you start with practical skills. Buy Rails meets React.js React.js by example

Build a Twitter Like Search Feed with React.js and appbase.io This is Part — II of a series on building Twitter like live search feeds with different Javascript frameworks. You can check out the Part-I published on scotch.io where we used jQuery. Ever tried Twitter Live Search and wondered how it works? On the surface, you search for a #hashtag or a keyword and Twitter shows you a live feed of results, with new tweets appearing continuously after the initial search results were rendered completely! Image: Live twitter search for #GameOfThrones How is Twitter able to return a dynamic result feed for any searched keyword? Image: Architecture for a naive realtime feed We can’t know for sure how Twitter internally implements the realtime feed, but the approach described above might be easy to get started but requires scaling two different system components, the database and the feed logic. In this post, we will describe a scalable approach to building realtime feeds using Meetup’s RSVPs as the data source. # Enter meetupblast! Key Ingredients # Deep Dive <!

React vs Angular 2 - final Tutorial: Setting Up a Simple Isomorphic React app Note: this tutorial assumes React 0.13 and React-Router 0.13. Updates coming soon for the new versions After hearing the responses of one of my other tutorials, it quickly became evident that a quick Google search on "setting up React" led to very confusing results. One of the biggest causes of this confusion is what an "isomorphic app" is. The project is on Github, and the following is a quick walkthrough of how to start from scratch. The goal of this project/tutorial to not only get someone's projected started but to clarify the process behind an isomorphic app. Isomorphism The main idea behind an isomrophic app is that instead of bundling all your React code into a single bundle (and then using something like <script src="bundle.js"> in a bare bones html page), you run a Node.js server that serves the files for you. With that, I will bring you through the entire set up process. Tutorial The tutorial will use the following stack: Installation Afterwards create your directory structure: React

How to Structure a React Project? – ReactJS News Editor’s Note: Please check out the React Indie Bundle. Juho and many other members of the React community help put it together. All of the proceeds go towards awesome people in our community. Programming is a bit like gardening. There are multiple ways to structure your project. Everything in One File The simplest of projects can fit into a single file. You could start working on a React project in a similar manner. Multiple Files The obvious way to solve this problem is to start splitting things up. app $ tree . ├── components │ ├── App.jsx │ └── Note.jsx ├── index.jsx └── main.css Here index.jsx works as the entry point of the application. If you wanted to test your components, you would add a separate directory for tests and develop them there. You can get quite far with this basic structure. Components in Their Own Directories This problem can be solved by adding more structure the system. Adding Views to the Mix This is likely where opinions begin to diverge. Dealing with Data Concerns