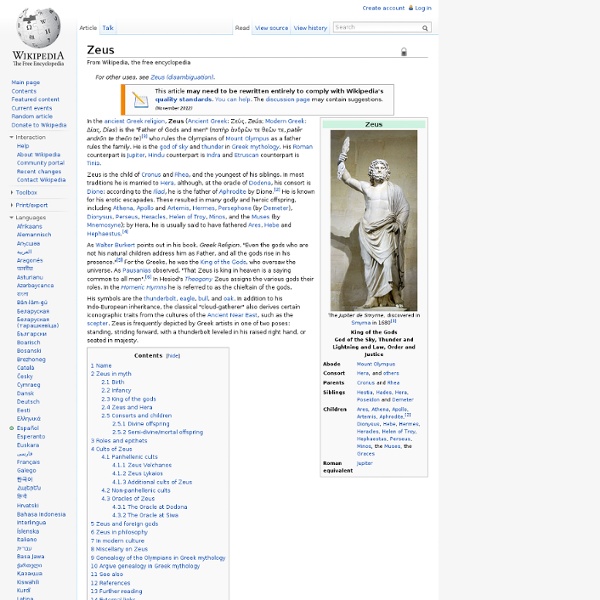 Name The Chariot of Zeus, from an 1879 Stories from the Greek Tragedians by Alfred Church. The god's name in the nominative is Ζεύς Zeús /zdeús/. It is inflected as follows: vocative: Ζεῦ / Zeû; accusative: Δία / Día; genitive: Διός / Diós; dative: Διί / Dií. Diogenes Laertius quotes Pherecydes of Syros as spelling the name, Ζάς.[10] The earliest attested forms of the name are the Mycenaean Greek 𐀇𐀸, di-we and 𐀇𐀺, di-wo, written in the Linear B syllabic script.[14] Zeus in myth Zeus, at the Getty Villa, A.D. 1 - 100 by unknown. Birth When Zeus was about to be born, Rhea sought Gaia to devise a plan to save him, so that Cronus would get his retribution for his acts against Uranus and his own children. Infancy Rhea hid Zeus in a cave on Mount Ida in Crete. King of the gods Zeus and Hera Consorts and children 2The Charites/Graces were usually considered the daughters of Zeus and Eurynome but they were also said to be daughters of Dionysus and Aphrodite or of Helios and the naiad Aegle.

Yahweh By early post-biblical times, the name of Yahweh had ceased to be pronounced. In modern Judaism, it is replaced with the word Adonai, meaning Lord, and is understood to be God's proper name and to denote his mercy. Many Christian Bibles follow the Jewish custom and replace it with "the LORD". Name[edit] The Tetragrammaton in Paleo-Hebrew (10th century BCE to 135 CE), old Aramaic (10th century BCE to 4th century CE) and square Hebrew (3rd century BCE to present) scripts.

POSEIDON There is a Homeric hymn to Poseidon, who was the protector of many Hellenic cities, although he lost the contest for Athens to Athena. According to the references from Plato in his dialogue Timaeus and Critias, the island of Atlantis was the chosen domain of Poseidon.[4][5][6][7] Etymology The earliest attested occurrence of the name, written in Linear B, is 𐀡𐀮𐀆𐀃 Po-se-da-o or 𐀡𐀮𐀆𐀺𐀚 Po-se-da-wo-ne, which correspond to Poseidaōn and Poseidawonos in Mycenean Greek; in Homeric Greek it appears as Ποσειδάων (Poseidaōn); in Aeolic as Ποτειδάων (Poteidaōn); and in Doric as Ποτειδάν (Poteidan), Ποτειδάων (Poteidaōn), and Ποτειδᾶς (Poteidas).[8] A common epithet of Poseidon is Γαιήοχος Gaiēochos, "Earth-shaker," an epithet which is also identified in Linear B tablets.

Baal Bronze figurine of a Baal, ca. 14th–12th century BC, found at Ras Shamra (ancient Ugarit) near the Phoenician coast. Musée du Louvre. "Baal" may refer to any god and even to human officials. In some texts it is used for Hadad, a god of thunderstorms, fertility and agriculture, and the lord of Heaven. Since only priests were allowed to utter his divine name, Hadad, Ba‛al was commonly used. Nevertheless, few if any biblical uses of "Baal" refer to Hadad, the lord over the assembly of gods on the holy mount of Heaven; most refer to a variety of local spirit-deities worshiped as cult images, each called baal and regarded in the Hebrew Bible in that context as a false god.

Dionysus The earliest cult images of Dionysus show a mature male, bearded and robed. He holds a fennel staff, tipped with a pine-cone and known as a thyrsus. Later images show him as a beardless, sensuous, naked or half-naked androgynous youth: the literature describes him as womanly or "man-womanish".[10] In its fully developed form, his central cult imagery shows his triumphant, disorderly arrival or return, as if from some place beyond the borders of the known and civilized. His procession (thiasus) is made up of wild female followers (maenads) and bearded satyrs with erect penises. Some are armed with the thyrsus, some dance or play music.

Rangi and Papa Papa and Rangi held each other in a tight embrace In Māori mythology the primal couple Rangi and Papa (or Ranginui and Papatuanuku) appear in a creation myth explaining the origin of the world. In some South Island dialects, Rangi is called Raki or Rakinui.[1] Union and separation[edit] Ahura Mazda Ahura Mazda (/əˌhʊrəˌmæzdə/;[1]), (also known as Ohrmazd, Ahuramazda, Hourmazd, Hormazd, and Hurmuz, Lord or simply as spirit) is the Avestan name for a higher spirit of the Old Iranian religion who was proclaimed as the uncreated spirit by Zoroaster, the founder of Zoroastrianism. Ahura Mazda is described as the highest spirit of worship in Zoroastrianism, along with being the first and most frequently invoked spirit in the Yasna. The literal meaning of the word Ahura means light and Mazda means wisdom. Ahura Mazda first appeared in the Achaemenid period (c. 550 – 330 BCE) under Darius I's Behistun Inscription. Until Artaxerxes II (405–04 to 359–58 BCE), Ahura Mazda was worshiped and invoked alone.

OTHER GODS The most enduring of H.P. Lovecraft's literary characters, Cthulhu first appeared in Weird Tales in 1928. Great Old Ones[edit] An ongoing theme in Lovecraft's work is the complete irrelevance of mankind in the face of the cosmic horrors that apparently exist in the universe, with Lovecraft constantly referring to the "Great Old Ones": a loose pantheon of ancient, powerful deities from space who once ruled the Earth and who have since fallen into a deathlike sleep.[3] Lovecraft named several of these deities, including Azathoth, Cthulhu, Ghatanothoa, Shub-Niggurath, Yog-Sothoth, Nyarlathotep and Yig.

Brahma Etymology[edit] In Sanskrit grammar, the noun stem brahman forms two distinct nouns; one is a neuter noun bráhman, whose nominative singular form is brahma ब्रह्म; this noun has a generalized and abstract meaning. Contrasted to the neuter noun is the masculine noun brahmán, whose nominative singular form is brahmā ब्रह्मा. Apollo Apollo (Attic, Ionic, and Homeric Greek: Ἀπόλλων, Apollōn (GEN Ἀπόλλωνος); Doric: Ἀπέλλων, Apellōn; Arcadocypriot: Ἀπείλων, Apeilōn; Aeolic: Ἄπλουν, Aploun; Latin: Apollō) is one of the most important and complex of the Olympian deities in classical Greek and Roman religion and Greek and Roman mythology. The ideal of the kouros (a beardless, athletic youth), Apollo has been variously recognized as a god of light and the sun, truth and prophecy, healing, plague, music, poetry, and more. Apollo is the son of Zeus and Leto, and has a twin sister, the chaste huntress Artemis. Apollo is known in Greek-influenced Etruscan mythology as Apulu.